Dose anyone use an additional tracking device?

Lots of talk about them on the other side of the pond, but from what I can tell they’re more aimed at the US market.

Here’s a post I made earlier on another forum.

Works on GSM network with a sim card of your choice.

2 options for tracking, automatic data upload at set intervals to manufacturers app or as I do switch off data and when you want a location simply sms the tracker and it will reply directly with Google maps link.

Can be mounted on top, side of legs or with a bracket at rear as I do.

Works as a phone so you can call it and it will ring, handy if you land in underrgrowth etc.

Has an SOS button so if anyone finds and presses, it will call your phone and you can talk directly to them.

There are other options which do not require cellular like Marco Polo however it’s not legal to use those frequencies in the UK and clash with a few of the networks 3g spectrum.
Not sure about Germany but think it might be a EU thing reserving the frequencys for GSM, land and maritime military.

Really is a great little tracker.

Use a bracket on rear which cost a tenner.

If you do put any tracker on the mavic, always calibrate compass with it in place and again if you fly without it. I’m never without mine.

And any photos of it attached?

I’m guessing it’s not locked to a specific mobile network? So you could use a roaming M2M sim so it always has a signal?

This is the bracket I use 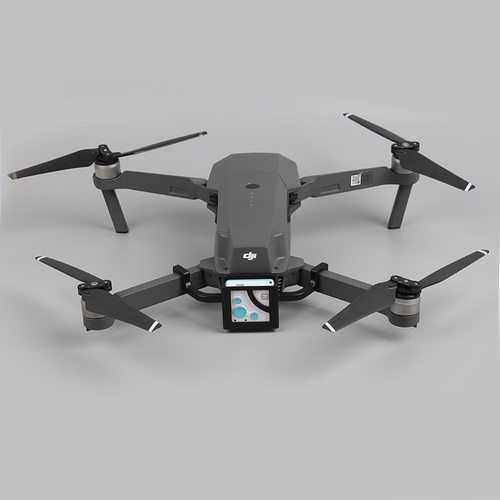 Works on any network but the data side only supports 2G. If you travelled to a country where 2G was unavailable you could still track by SMS.

There’s loads of other options but for the cost this seems like the best option and weighs only 27g.

And it’s a lot smaller than I thought too.

Had one of these for my P2 a couple of years back, and was unimpressed with it’s reliability … just in testing/playing, before I ever got to attaching it to the P2, and I sent it back for a refund.
Others on a UK Phantom group reported similarly, though some thought they were great. Don’t recall reports of any being saviours when really needed to be.
Perhaps they’ve improved them since … could be worth testing.

If it does work … I’d want it to be attached more securely than that bracket would appear to provide. You don’t want the MP and tracker going in different directions. Rather defeats the objective.

The one thing that probably won’t have changed significantly, in the remote places that many of us like to fly, is mobile/2G coverage.
Look at the many postings in other forums of the “final track for their” MP, and many/most seem to end up in woodland, somewhere.
I took mine to the edge of woods adjacent to a local field where I often used to fly the P2, and randomly threw the tracker into the vegetation. It was totally useless … even though within an urban area with quite good mobile coverage. Damp tree foliage and woodland litter is excellent for killing mobile signals.
Add to that, the same conditions also make a GPS fix far less likely.

This last bit can be checked with your phone (though skip the “random throwing” bit), and see how poor mobile/GPS coverage can become on something with far better tech than the tracker.

All that said … for £20 in case it’s needed and might work and enable the rapid location of £1k+ worth of MP … I’d not say “don’t bother!”, though I won’t be. In 4 years of P2/MP ownership, there’s not been an incident where it would have been needed. * touches wood *

Yeah it’s not going to be perfect out in the sticks but better than nothing at all. Gives me a sense of peace of mind, worth it for that alone.

Ive tested a few times in woodland, city centres and the country side where I live. Has always replied with a GPS fix.

Bracket is fine, yes may detach in a crash but not going to land much further than the MP. You do get one which holds it on top with Velcro and a strap.

One of those things though, I probably will never need it, just makes me more comfortable having it

I am thinking about this that I can move between my Mavic and Disco, any more thoughts on the options for cost/size on the market right now? Still the RF-V16 ?

Fits perfectly inside disco hood behind battery with some velco.

Anything the size of that or trackimo is perfect.

Yup am to looking into a tracker. Maybe worth a punt

Tested mine in Mavic today.

Sold!!!
Been an expensive month this month

Definitely worth having though

I’ve got that bracket but tend to just Velcro it on top at nose now.

Bracket had advantage of it being in exact same place every time while Velcro could be a few mm either way and actually need a compass calibration.

Thing I didn’t like about bracket was it obscures the rear indicator.

Whatever you decide just make sure to calibrate compass with it in place and again if your flying without it.

Will do bud. Thanks for the info

Got home from working overseas yesterday to find the rf-v16 had arrived. Seems to work well after some minor faff setting it up. A great size too. Thanks for the tips all.

Yes mine came a couple weeks ago. Well chuffed with it.