We knew this was coming:

We do not believe that the UK has in place the necessary infrastructure to move away from non-class marked UAS, to class marked UAS by 1 January 2023, and so would like to consult on a proposal to extend the Legacy and Transitional period, to allow time for the necessary steps to be taken by Government

I’ll be dead before they finalise that - and I have no plans on being dead within the next 30 years.

The CAA are asking for submissions, take a look at Proposed extension to Legacy and Transitional UAS provisions in the Open Category - Civil Aviation Authority - Citizen Space

Right; better spread the word to get as many people to give their feedback, so they can take a year to ignore the views of the masses… 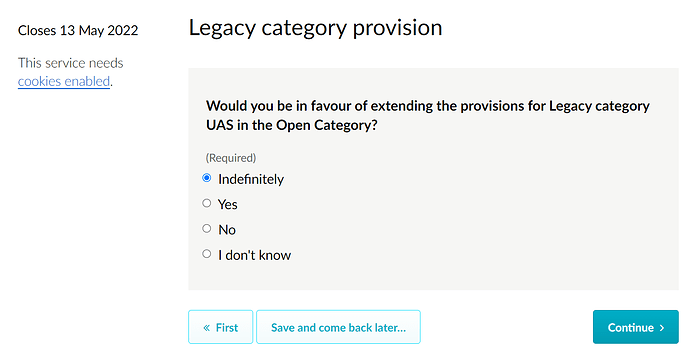 My submission is in

Just got an acknowledgement email from caa.co.uk@mail1.citizenspace.com

Hopefully, there will be enough feedback, and they’ll push back the date to something more realistic … say 01/01/2029

I saw a couple of people on Facebook who had submitted a response arguing that for purely environmental reasons it is better to extend the “transitional” arrangements indefinitely, at least for drones shown to be equivalent to C-class. Way too much stuff goes to landfill and regulators need to start taking that seriously.

Re: the image shared by @clinkadink for “legacy category provision”, you really have to laugh. Legacy provision already extends indefinitely. There’s no need to extend it - it automatically applies forever. Makes you wonder if they understand their own regulations!

“To many recreational UAS flyers the purchase of a drone is a sizeable investment which is expected to last many years - few can afford to replace them when regulations change at relatively short notice ( though of course the manufacturers would like them to buy new product as often as possible ).
Extending the allowable use of existing drones indefinitely is good news for the consumer.”

Gee let’s put everything else in the world into the same context… Cars at 3 years old need an mot, legacy class in my opinion

banish them to the back roads of Tibet!

There’s no need to extend it - it automatically applies forever.

Ah, I guess this is about the date a drone comes onto the market. Under the current regs, only drones “placed on market before 1 Jan 23” can be treated as Legacy. That’s a big issue for the future Mini 4, which would have to be sold as C0 or C1 (so, speed-limited etc) unless this part of the regs is extended.

Ah, I guess this is about the date a drone comes onto the market. Under the current regs, only drones “placed on market before 1 Jan 23” can be treated as Legacy.

Yes; this is the point exactly. So by extending the Legacy period, it basically allows manufacturers to further delay classifying their new drones.
So, part of me thinks this shouldn’t be extended, as it’s clear it’s the regulatory bodies that haven’t got their stuff together on this; the manufacturers are more than ready to start classifying.

So, my thoughts might well be to extend the legacy by a year, (to ensure the classifications do finally get implemented) but extend the transition period for at least 5 years minimum, if not indefinitely.
If a drone is safe today, why will it be unsafe tomorrow? In the absence of evidence showing their inherent danger, why limit any drone that’s unclassified?
What’s your thoughts?

That makes plenty of sense, in the same way with car safety that mandating better safety on new models doesn’t mean suddenly having to take all the old cars off the road.

In the absence of evidence showing their inherent danger,

This is the fundamental problem with letting an organisation set up to make manned aircraft safe responsible for the safe use of unmanned aircraft.

Once they get beyond the need to keep manned and unmanned aircraft apart, they should really be applying an entirely different safety regime for drones.

Over 1500 people a year killed by road vehicles. 50-100 deaths each year from DIY (mostly from ladders - but vast numbers of injuries from hugely dangerous cutting devices sold to people with no training, license or registration).

So long as the CAA remains the regulator, we can’t expect even a smidgeon of common sense to apply.

I’ve done a quick vid on the main differences between Legacy and Transition. And there’s some cut+paste text in the pinned comment 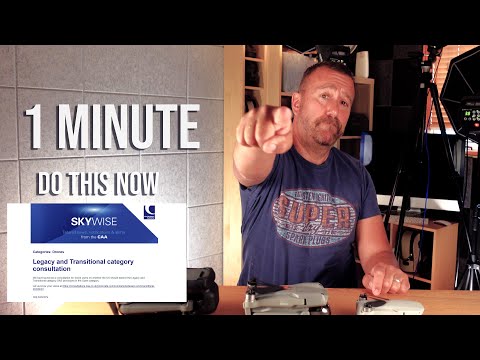 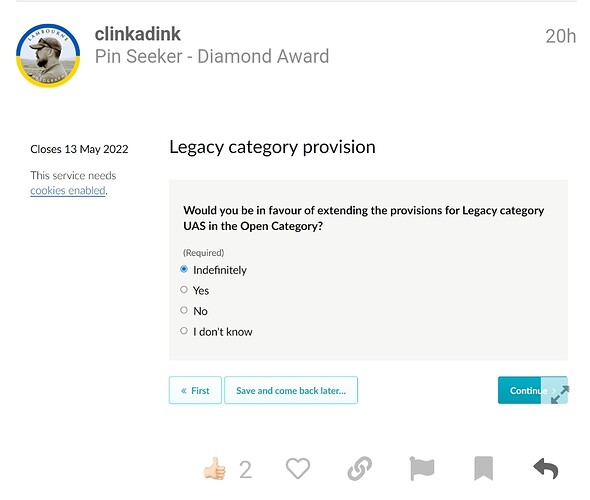 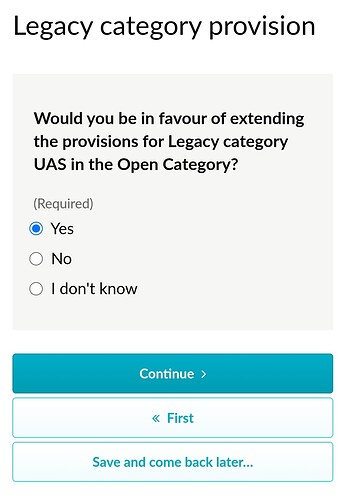