Not sure if anyone can help, but I decided to stat the sims again… Been a while and looks like weather won’t allow any outdoors this weekend… I installed velocidrone on my better work laptop and congigured the TX16S all good. Had a few goes (boy I need practice), but anyways…

Connected the Cobra X to it, and the desktop and seemed OK. both 1080, and 720 (it’s 1280x720 “natively”). Also @notveryprettyboy connected his HDZero receiver to them on Sunday, and that worked. In velocidrone it just fuzzed or blurred. No stable image at all. Tried a number of resolutions and refresh rates (bizarrely listed as 59Hz not 60Hz which my monitors I also used are).

Any ideas (as a note the HDMI is via USB C connection). As it’s a laptop it’s Intel + RTX 3050 Ti (mobile version). I might try my personal laptop which has a proper full sized HDMI port.

I’m away for a few days next week, and don’t wanna take my personal laptop, just the work one

My last work laptop did that. My new one has a separate power cable.

My old skyzones had a problem with hdmi. I got it working by connecting it to my virgin media box, then back to the laptop

My old skyzones had a problem with hdmi. I got it working by connecting it to my virgin media box, then back to the laptop

OK that’s good to know. Have an xbox here, will ty that tonight. What res did you run at?

I cant remember. It was a couple of years ago

haha no worries, seems to take 1080 or 720 fine from desktop. I’ve google to not much luck. Will provide update when have another go!

I did read somewhere that its a copy protection thing. Not sure, thats over my head.
It was odd because how could the skyzone just work after it was plugged into the virgin box.

The hdzero runs at 59.something hz if that helps…

I’ve used mine with my PC once and it was fine but that was direct from the GFX card with an HDMI cable.
(I didn’t like it - I much prefer the big screen.)

Cheers. Do wonder how internal laptop with dual gfx works. Know had issues with that setup in Linux in the past. Had a night off the PCs and geeking so will try tomorrow!

If memory serves me right if you are using USB-C to output video, the device it is feeding needs to have the ability to convert the data stream to something usable. The USB-C port on the Skyzone Goggles is only setup to do two things, that is to supply power and to work as a mass storage device for firmware upgrades and such.

If you only have a USB-C port on your laptop you can get one of these: 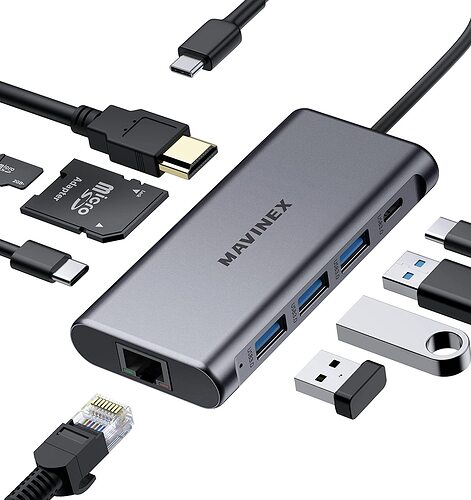 I use one of these because my laptop doesn’t have an Ethernet port. I also use it to connect to a portable monitor as the hub has a HDMI I port, the conversion is done within the hub. Interestingly even though my laptop has a 4K screen its HDMI port only supports 1080p, but using the hub I can output 4K via its HDMI port.

You’re absolutely right Nidge, and I have an adaptor with a HDMI port on it (similar to that one). It may be badly supported, as the ethernet doesn’t work on it in Windows 11 (that’s realteks fault though). So looking forward to trying a “proper” HDMI port on other laptop or another adaptor. If works I might get a dierct USB C to Mini/Micro whatever the damned goggles are HDMI cable. Also if I like playing it on the goggles rather than a 27 inch screen (some people don’t!) 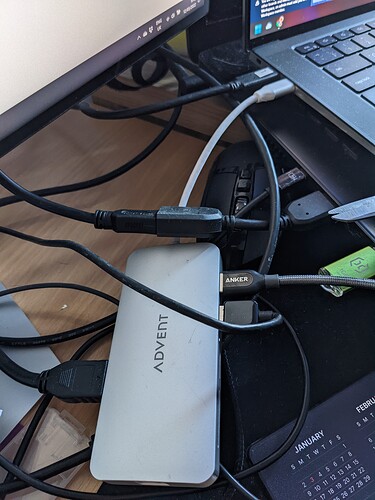 And I got it working… I looked at the linked device you said, and it mentioedn power delivery… Sticking a USB power into the “hub” fixed it! It said needed it. Woohoo

Hasn’t fixed the ethernet unfortunately. Actualy the adaptor has totally gone from devices… before it was listed as driver issues, strange. Tried so many drivers to get that working. The Wifi on this Dell though it top notch!

Makes sense for high power devices. I actually have an A port hub off it on a hard drive, so it’ll struggle.

So kids, power your hubs for things other than mouse and keyboards

TBF I was given this one by work out of a drawer. The one you linked gives another USB c port… Hmmm… Though tbh probably need more than one more. And be nice to have 2 hdmi devices. They getting to 80 odd quid I think for loads of devices. Shame can’t get ethernet working. Come on realtek sort win11 out

Since transitioning to W11 I haven’t used the Ethernet adaptor, but will test it later as I use this for moving large RF bandwidths from a SDR (Software Defined Radio). If the port no longer works I will not be happy.

If the port no longer works I will not be happy.

Sorry didn’t wanna be the bearer of bad news. I went to look for it in device manager again, and it’s not even there now. Strangely plug in a cable and it lights up with the connection and data activity lights. I guess that’s not that strange as it’ll be internally working, just not talking with the PC…

I’ve just had the opportunity to test mine and it appears to be working as it should.

In the device manager, under Network Adaptors, it’s listed as a “Realtek USB GbE Family Controller”

Mine did just show up, and I tried a few of the drivers that were listed, and then it blue screened win 11 (my first ever BSOD for Win11, go me!). PC rebooted, and now it’s not even listed again… Maybe I need to look at getting a different one, as I said before it’d be nice to have a few more ports… Then againn it’s rare I transfer LARGE data sets internally on my network, so… I dunno! One for the future.