So I was out on the beach today withy 2 boys and the drone, a little windy but not too bad (around 9-10 knots) the drone was flying happily until i received an error message stating that there was magnetic field interference, the drone then went into ATTI mode and began to drift quite quickly on the wind and the only control I could use was to lower the aircraft until it hit the sand, I could not stop the roters from spinning once on the ground and it was trying to lift again it eventually flipping roters down snapping 2 of them.

I also checked on UAV Forecast and there was no warnings on there.

It looks as though I have been quite lucky as I was only at 30 ish mtrs to begin with and almost directly above my head. And the only damage I have found so far is to the rotors and sand ingress that I will clean a before I take it anywhere.

So I gues all I am asking is did I miss something?
have i done something wrong?
Could I have done anything different other than ditch it into a sand dune?

Many thanks in advance.

Hmm, certainly an odd one. Without seeing the flight records it’s hard to say for certain, everything would be stabbing around in the dark, guessing.
It’s unlikely to be the KP index, so we’ll discount that.
It’s possible that there was an area of mag interference or the drone needed calibrating before take off. If this isn’t done, then it will enter atti mode once away from the source of interference, because it doesn’t know where it is in time and space because, for example, due to mag interference it thought it was pointing north, then when away from it, finds itself pointing south, so one of the sensors can’t agree with the GPS sensor. Or you took off without enough GPS fixes and when it gained another load of fixes, it went into atti mode.
I don’t know where you took off from, beach, car roof, or granite floor. There are so many variables as I say, without having the downloads from Airdata, it’s hard to say.

Without seeing the flight records it’s hard to say for certain, everything would be stabbing around in the dark, guessing.

If you can post the resulting CSV that you get from the .DAT source - we’ll have something to go on

Beaches often have buried cables. Where were you flying, local nautical charts should show burried cables as a wiggly line.

Both AC and DC high voltage will cause local anomalies.

Worth reading the accident report on an occurrence with a Matrice 699 that shows similarities. You seem to have acted more quickly than the pilot and observer in the Matrice incident. 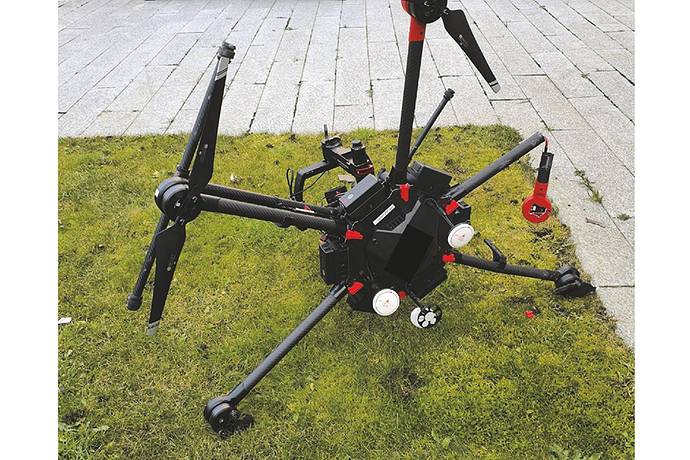 A DJI M600 Pro suffered a GPS-compass error and did not respond to the return-to-home function. It subsequently collided with the roof of a house before falling into the property’s rear garden, 13 Dec 2019.

Investigating the cause will be beneficial, luckily you had the space to just emergency decend.

If you have the opportunity then fly some atti mode flights, in good weather and get to feel how the drone behaves. If you don’t lose the link then you can possible save your drone by manually flying the drone back in atti mode.

Hope your inspire is repairable and you get up ans flying soon.

Atti is a little uncomfortable but most of the time you won’t be flying intricate missions in atti, unless you are offshore.

Thanks alot for all the replies, I realise now the amount of variables involved. I took of from a fairly secluded beach, its the Danger area for live firing range where I work. It’s on the River Mersey which is a really busy shipping lane, there were 3 large vessels in the channel at the time if that is relevant?

I did not calabrate the compass prior to flying as I have flown here before and didn’t think it was required.

I am unable to link my drone to PC at present but will try through the week I did however record the flight data off the DJI go app if this helps.

I am unable to link my drone to PC at present but will try through the week I did however record the flight data off the DJI go app if this helps.

If you haven’t already it is well worth linking to AirdataUAV which is free for 100 annual flights and subscription for more flights and features.

The free service is comprehensive enough flight map, second by second flight data, signal strengths and the like. You can set it in your flight app - DJI Go, Liychi or a dozen others to automatically upload the data at the end of each flight. 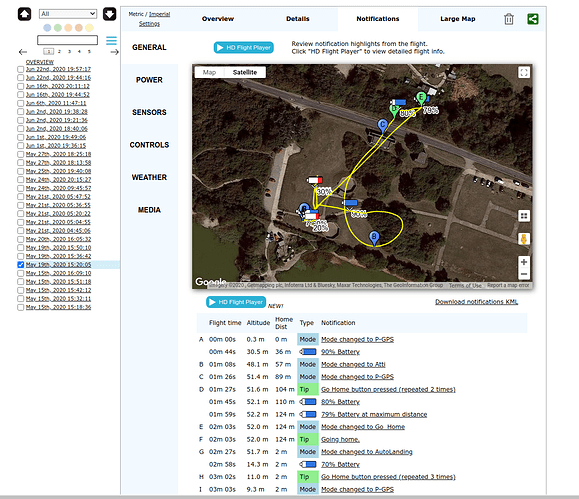 Or the detailed version: 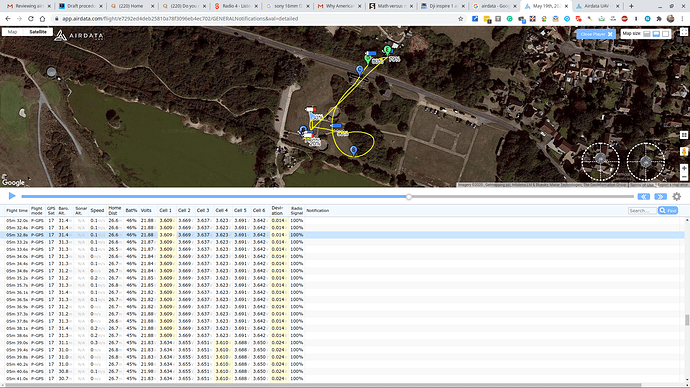 Just played your video full screen. Only four GPS satellites showing. Was that due to the interference or were there only four satellites received during flight?

It started off with 18 then lost 14 and only had 4 upon landing.

I downloaded this app on my phone and it has synced passed flights, is there a way to extract the data to upload onto here? 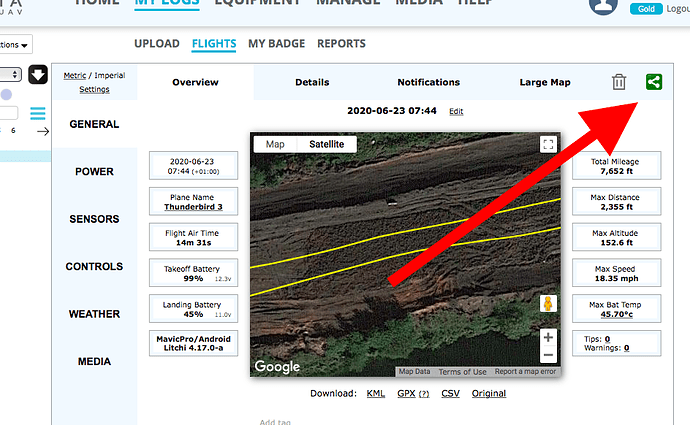 Perfect thanks, I was trying through the app.

Again I cant thank you enough, I only joined the forum a week ago!

Out of sheer curiosity… if you remove the props, keep the power off, and spin each motor in turn by hand, do they all spin freely?

Is one of them offering more resistance than the other three?

the drone was flying happily until i received an error message stating that there was magnetic field interference, the drone then went into ATTI mode

If it helps, I’ve been able to force my Inspire in to ATTI mode (without hitting the switch) by simply flying it aggressively. Sharp turns, at speed, etc.

Here’s an output of one such flight - look familiar? 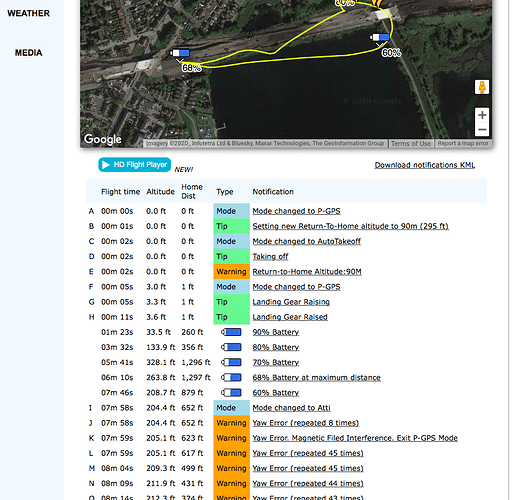 Is your Inspire also running modded firmware and tweaked parameters?

I’ve been able to force my Inspire in to ATTI mode (without hitting the switch) by simply flying it aggressively. Sharp turns, at speed,

It was on this sharp curve, at this speed: 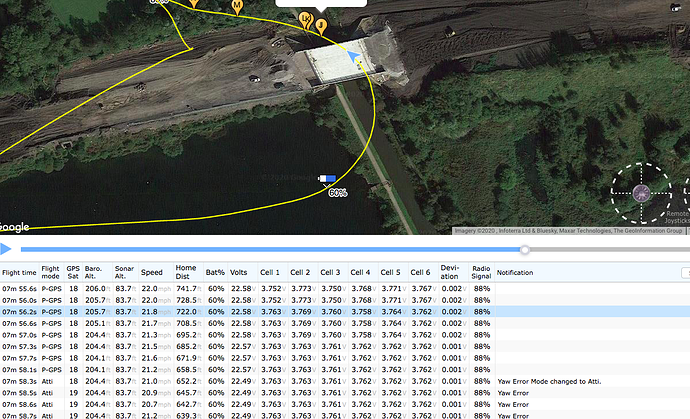 And if I replay your flight using the HD Player at around the 07m 01.2s mark you seem to do some very sudden moves with full left-stick inputs, right before it drops in to ATTI mode.

This may be nothing to worry about mate - just go easy?

No noticeable resistance from any of the motors they all spin freely.

I bought i used from my company and to my knowledge it was not moded I can’t see why they would for building surveys.

The full stick movements was to counter the wind drift.

How windy was it exactly?