While we’re waiting for more leaks and rumours, here are some threads that covered its predecessors:

Had a quick play with the timelapse function on the Osmo and I’m quite impressed with it. [Dji Osmo Pocket timelapse test]

You heard it here first

This turned up on the FCC database yesterday: [image] [ikiteflyer_1] [ikiteflyer_2] They seem to have dropped the word “Osmo” from these though, which would fall in line with them renaming the Osmo Mobile to the “OM”. But the model number still starts with an “O”

Things We Want To See

While we expect the DJI Pocket 3 to come with visible upgrades, we also anticipate the device to bring some other tweaks to win over the competition. So here’s what we like to see in the device (and perhaps, you may wish the same too).

Though the existing DJI Pocket 2 flaunts improved results with 8-bit color. Yet, it’s less than the marketed claims of HDR support, which is actually 10-bit color and not 8-bit. So, with DJI P3, getting the real HDR 10-bit would be great.

That’s another feature that most DJI P2 users ask for – a dedicated astrography mode. According to a Reddit user, features like long exposure (more than 8 seconds), together with a large sensor, would be impressive.

The DJI P3 rival camera GoPro Hero 10 has been the users’ choice for its ultimate waterproof design. This flagship can withstand depths up to 10m – thanks to its durable camera and rugged design. DJI may significantly improve its Pocket series by introducing this feature with Pocket 3.

Excessive device heat-up is a significant hurdle in DJI Pocket series popularity. Even the innovative DJI P2 flagship failed to satisfy customers due to overheating issues. Maybe, improving the processor and including some air vents or heatsinks can help in better heat dissipation.

The waterproof thing is an interesting one. I’d be happy with rain/shower proof, it’s not an action camera after all. The old underwater-case was kinda huge and bulky

I’d like to see some internal mic / audio improvements too. That said, I’ve only got the v1 so not sure how good the in-built mic arrays are on the 2, maybe it was ok there.

I also loved the charging case, just wish it had a better internal battery capacity

Some items on the above wish list do interest me. But I would settle for:

some internal mic / audio improvements too

Never used the internal mic, only the DJI wireless mic that comes with the creator combo. And fair do’s … it is very good.

I’d be happy with rain/shower proof, it’s not an action camera after all.

Yeah, me too. But saying that, I’ve been out when it’s pissing down, and had no issues with the P2.

including some air vents

Did the 2 not have that then?

I bought the external base/wifi for my v1. Definitely needs wifi built in.

You know it’s a Pocket, right?

I’m sure they could take some code from their Action for this. I only ever found the Z axis a problem if I didn’t do the walk properly, but that was usually a quick one-button fix in post with iMovie

Did the 2 not have that then?

Not without the extension. That includes WiFi module, extra battery power (I think) and a 1/4" tripod thread.

You know it’s a Pocket, right?

I’m sure they could take some code from their Action for this. I only ever found the Z axis a problem if I didn’t do the walk properly

Yes, totally agree (on both counts). I currently use a cool handheld stabiliser that John @Hotrodspike gave me. It certainly does work very well. I now have an Insta360 X3 (for action) and have noticed the magic that it uses to stabilise chaotic, fast-moving shots. The Insta will never replace my P2 for vlogging though - it doesn’t come close.

I am tempted to sell my P2 setup now, as I too feel that the P3 release is imminent. But, as always, it’s a gamble. And I can’t really afford to be without the P2 for more than a couple of weeks.

I’d probably sit tight until we get some proper leaks, be it photos or FCC leaks, or something at least… because even then it’s going to be a month or two before it’s actually available.

Gutted if it is that long. That’s way of it’s target … and the Mini 3 arrived only 1 month later than they planned. Devil’s advocate … Avata and Mavic 3 Classic isn’t even listed on there 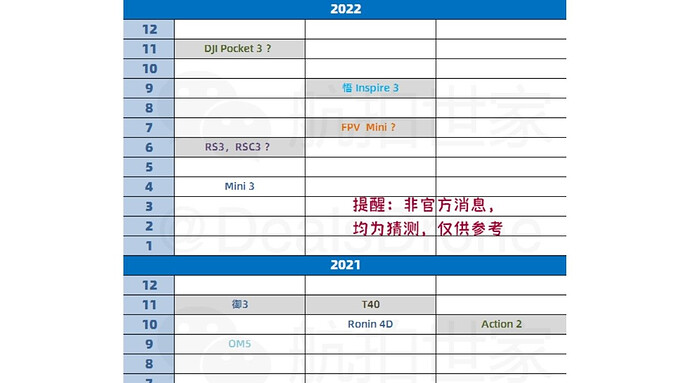 Edit: actually the “FPV Mini” is probably the code name for the Avata.

Yeah that list was a bit off… Did you make it?

I’m guessing April purely because DJI normally release something in April and they must be all droned out for the time being!

I have to confess I’m happy with the one I have.

I know the sun wasn’t out and the winds subsided after I had taken this - however the drone was sleeping then.

I have to confess I’m happy with the one I have.

It is a decent bit of kit, isn’t it? And mine has taken quite a bit of abuse over the past year.

I like it - produces good results and considering its moving parts it seems well built IMO.

Definitely on my wish list atm, just need to see the specs and price… Then have to persuade hubby that we need one asap…