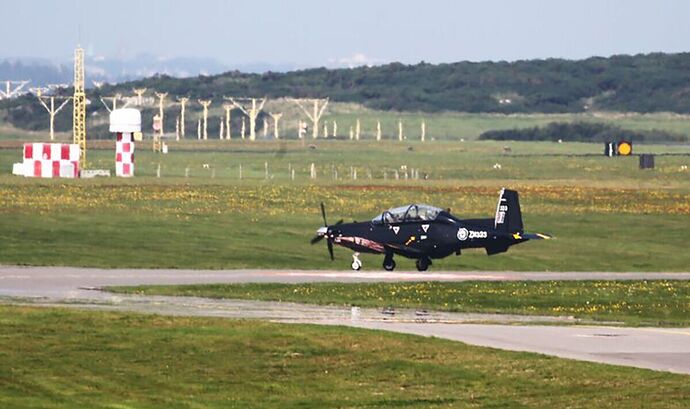 AN RAF pilot was forced to make a split second decision after hearing a buzzing noise mid-air just 60ft away from his aircraft.

Bollox how the hell did he hear a drone over his own aircraft noise?
More than likely got a wobbie in his cockpit before take off buzz buzz, seriously that pilot needs psych help if he truly believes he heard a drone

over his own aircraft noise

You can’t hear your own aircraft when you’re exceeding Mach 1.

Actually - having flown small jets - they are remarkably quiet from the pilot’s seat.

But - they have helmets with snug fitting headphones … and when wearing those you’d not even hear yourself fart.

It would be like at an air show on a low fly past where the pilot says he heard his wife and kids screaming at him, never in a million years, and exactly why they don’t fit mics on a drone, all you’d hear would be noise

why they don’t fit mics on a drone

Good old GoPro on my P2 days … awesome soundtrack … not.

Strange that this isn’t the headline and it’s buried in the shite.

and exactly why they don’t fit mics on a drone

they are remarkably quiet from the pilot’s seat

Having flown a De Havilland T10 Mk2 for several months at an airfield where several De Havilland Jet Provost 4 were keeping the AT school on their toes … the first most significant difference, even taxying, was just how quiet the jet was from the cockpit compared to hearing them from the ground.

And they never really got a lot louder - take-off being discernable.

Main noise the whole flight (and those in Jet Provost 4 and 5, and Folland Gnat) was the gentle hiss of the air/oxygen into the face mask.

Bollox how the hell did he hear a drone over his own aircraft noise?

I’ve read and re read this, where does the pilot say he heard a buzzing noise (the drone pilot does)

My bad I read the headline and went straight to the comments, not liking the Express I assumed the worst

“SPLIT SECOND TERROR”, the pilot didn’t know about it until days after!!!
Typical media, can’t be bothered to print the truth, so make it up!

Careful ,Mark we can’t have you speaking common sense on here…

How very dare you…
Was the pilots name Ken , by any chance ???

The secondary headline infers it was the RAF pilot that heard the buzzing.

That is what I read first, which made me think it was a Brit and when in the sky, even the comments on the papers website were cursing the paper for false reporting

The whole article is pointless, the pilot is quoted as stating it was ‘low risk’ despite the click bait headline. It was the drone pilot who reported the incident, I guess to cover their own arse.

Yes…it used to be NOTAM but changed…The following is from Google…seems to be a gender thing.

Some members of the pilot community have taken to social media to mock the change: but it represents an important ongoing effort by the FAA to modernize their language and systems to accomodate a variety of flyers and aircraft. “Air Mission” is not only gender neutral,

but also more accurately describes drone operations – and the operation of other aircraft possibly as yet undefined.

The main thing to take away from this is that when in low flying areas, you need to expect other aicraft to be in your operational area and be prepared for it.

I think it should be mandatory when operating in these low flying training areas to raise a NOTAM regardless of what height you intend to operate at.

I have 2 commercial drone flights in the very location this article refers to, so will call RAF Valley to give them a heads up, despite not being in RAF Valley FRZ.

It is an issue that the CAA needs to resolve.

Notams… They were the bain of my life for 27 years in ATC/AIS I read/handled/filed and published 250k of the bloody things a year not to mention the SNOWtams for winter conditions on airfields/runways!! from European airports/airfields.

That’s some going, over 1000 a day, did you ever ask for piece work