Drone shot at (not UK)

I found this on YouTube I know it’s not in the uk but found it interesting , so I thought I’d share , I hope I’ve posted I I in the right place and that it is allowed , if I’ve made a mistake in posting it I shall happily remove it . 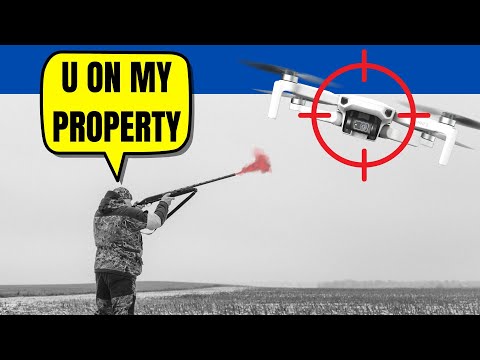 Just made me think this could happen any where , some of you may already seen this . It was posted 4 hours ago

Knock on the door and smash the jaw. Just my opinion of course and there are many other options out there.

there are many other options out there.

Yea like forget the knock on the door just reverse threw it !

Confront me first, we’ll have a discussion. If I’m flying illegally or dangerously and you have a point which I havnt factored in, then I’ll take stock, have a think and readjust if not cancel the flight.

Damage my property in an illegal manner, with or without dialogue and I’ll give you several cracks

That’s how I brought myself up , you trash my things me or my family then it will be what it will be if when and what and consequences , I’m not trying to educate to any one to do wrong but we all deal with things in our own way , the person would have a miserable life for sure , just easier for they or them to move especially if I had there location they’d never hear the end of it , simple !
That I’d always stick too ,

Your shooter is lucky that it was in Denmark, not the USA. There he would probably have had a facefull of .45 ACP in retaliation.

My understanding of using an air rifle in the uk is that I can fire it and the pellets have to be contained within the boundaries of my property. So I can shoot at a target propeed against the fence with a steel backstop behind it, I cannot shoot at a pigeon if there is a danger of the pellets falling outside my property.

Ignore that and you will be sharing a cell with someone unpleasant. Or, if the police mis-idnetify the weapon when you brandish it at them you could wind up dead.

that is correct , I sometimes do that till this day ( I’ve ran out of pellets ) , I learnt with air riffles at quite an early age as my father taught me with his old army air riffle what he learnt , I still have my dads riffle in a cupboard under my stairs , the butt his half burned but the riffle still works , in my dads day when you left the army you had to throw your riffle on the fire “ which he done “ the story he told me when the Sargent / officer had gone he ran back and dragged the riffle from the fire and managed to take it with him.

An air rifle, or air weapon as the media have branded them, now need to be licensed in the UK. They have pretty much the same laws as you would need for a rifle on FAC, if they are not registered they are classed as a firearm and carry the same penalties for misuse. You can not discharge in built up area or near a public road. Your pellets , if plinking in the garden, must stay within the bounds of your property, whether shooting at pigeons or anything else. You are NOT allowed to shoot pigeons for food, only for pest control, whether by rifle or air rifle. They are still protected under general license.

An air rifle, or air weapon as the media have branded them, now need to be licensed in the UK.

I believe this only applies to Scotland, not Wales and England.

Last year I was going to buy a real nice one looked the part , air loaded with canister holds how ever many pellets a pretty penny too and that was without the sights and extras , they told me at the gun shop they have to register that gun against my name .

That could well be the case!!!
We’re so lucky in Scotland to have the snp looking after all our interests

Saw that on YouTube, totally out of order, sometimes ignorance prevail unfortunately

No license required in England at the moment.

Unless it’s over 12ftlbs energy at the muzzle, in which case it needs a FAC.

Unless it’s over 12ftlbs energy at the muzzle

My Drone has been shot at