Drones getting a bad rep

I have just seen this on the app Nextdoor this area is close to my location.
Is it just someone having fun general flying but irritating to them who hate drones or is it being used for illegal gains 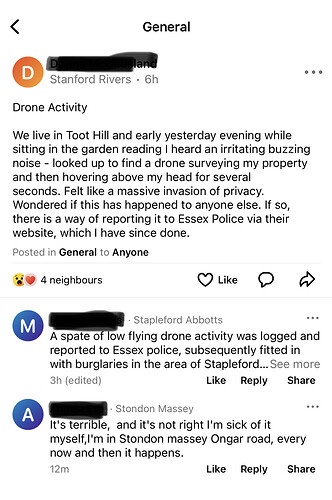 I would ignore it, any comment will probably stir the pot as without knowing exact facts with proof, if you said it was at 100m alt they will insist it was at 10 meters nothing you will say at the moment will settle their concerns.
On the flip side.
I was out yesterday and was approached by a really nice couple from Oldham, they are up here visiting. They asked if i saw them waving earlier, (i hadn’t) showed them what is possible to see from a drone even when its quite close, explained various aspects of the hobby and law, he went off determined to buy one. 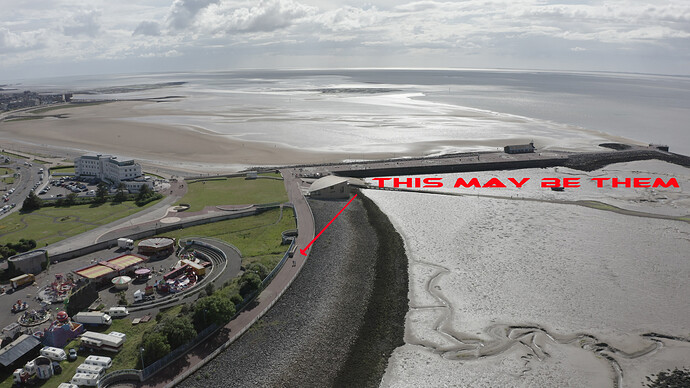 I have just seen this on the app Nextdoor

What did you expect to see on an app like that? It’s what they’re for, moaning about stuff

You carry on enjoying your hobby and don’t spend any time worrying about what Karen thinks.

@PingSpike I wasn’t. Now I am a drone owner I am now seeing what I could be up against from the local drone police in my area. Looking at the map for the complaints area lots of fields golf course and a few houses. To me all nice places to fly but stay away from houses if possible

@stevesb If we are nice to them they and explain what we can see or do they are nice back . Well most of them anyway.

You’re only up against them if you engage with them

@PingSpike only issue at the moment is I am on crutches, so walking away from the Karen’s of the world is a bit of a problem. But I do have weapons to poke with and I can use the drone footage as they are attacking a helpless person. I am sure the Sun would publish

I am sure the Sun would publish

Unfortunately probably not favourable to you as you are flying a drone, you know how mainstream media like to sensationalise headlines, i can see it now.
“Disabled man uses drone to spy on neighbours”

I agree that it can feel like an invasion of privacy, even though they are outside for the world to see.
People just have to get used to drones. The more common they are, the more desensitized they’ll become. Going to take time

They also say, “hovering above my head”. We’ve no idea whether it was a few feet above their head, in which case there’s a privacy issue, or they could see a tiny dot in the sky as they lounged in the sun. More likely a tiny dot.

Note to self, re-install Next Door and see who I’ve p!ssed off recently.

Now I am a drone owner I am now seeing what I could be up against from the local drone police in my area.

I’ve been flying drones for just over 2 years now and I am yet to have any sort of negative interaction. The only thing that has come close has been people who have been curious but not appreciative of the fact that you’re trying to do something.

Oh, Nextdoor. Of this fame. https://twitter.com/bestofnextdoor

The home of curtain twitchers and colonels of the cul de sac.

Where do you look at a map of complains?

I get many more positive encounters than negatives but I try to fly considerately. Some people just love to moan and you would probably be wasting your time trying to educate them but it’s always worth a try in the first instance but my tolerance for idiots is extremely low. Many people that approach are genuinely interested and find it very interesting. Some are potentially new drone pilots. I had a very opinionated woman march up to me with her German shepherd dog telling me I was not allowed to fly in these fields. I think the dog was supposed to intimidate me as she left it off the lead as it ran up to me but I love dogs and have had a couple of GSDs. And we got on great I think the dog wanted to stay with me when she left. She doesn’t stop anymore but her dog always comes over to say hello. I always try to avoid overflying people where possible even if it’s not illegal it’s not really good practice and quite likely to cause annoyance. I also restrict my flights in residential and built up areas. Continually flying from a back garden in a heavily residential built up area is only ever going to draw out the resident Victor Meldrew’s. Regardless of the fact it’s not illegal with a sub 250g.

Hope they know it’s a criminal offence to fire an air rifle beyond the premises boundary. And that includes upwards into airspace.

And that includes upwards into airspace.

Once, I was ripping around my micro 3" fpv racer at my tiny local green space. When I finished a pack and lowered my googgle I saw an older lady and her small dog start heading my way across the lawn. “Oh boy” I thought and started gathering together all the polite words I can think of to present to her in a respectable way. She got within ear shot and I muttered a nice greeting. The moment I heard her tone when she said “What’s that thing you’re flying around?” all my guards came down. We exchanged a few sentances and I let her hold the quad that she admired with wide eyes. After mentioning that people race these things she responded “You should organise a race here, there are so many trees to go around!”

Where is that ??? and is that a Fair ground on the left…Brilliant Shot.
If you look close they were not waving at you they were giving you the BIRD…