Eildon Hill lies just south of Melrose, Scotland in the Scottish Borders, overlooking the town. The name is usually pluralised into “the Eildons” or “Eildon Hills”, because of its triple peak. The 422 metres (1,385 ft) high eminence overlooks Teviotdale to the South.[1] The north hilltop (of three peaks) is surrounded by over 5 km (3.1 mi) of ramparts, enclosing an area of about 16 ha (40 acres) in which at least 300 level platforms have been cut into the rock to provide bases for turf or timber-walled houses, forming one of the largest hill forts known in Scotland.[2] A Roman army signalling station was later constructed on the same site as this hill fort.[3]

The mid hilltop is the highest, whilst the south hilltop is the lowest. The hills are owned by the Duke of Buccleuch,[4] Scotland’s largest private landowner.[5] As with all land in Scotland the public have a right of responsible access to the hills,[6] and there are many paths crossing the area and leading to all three summits.[7]

The hills form part of the Eildon and Leaderfoot National Scenic Area, one of forty such areas in Scotland, which have been defined so as to identify areas of exceptional scenery and to ensure its protection from inappropriate development.[8] The areas protected by the national scenic area (NSA) designation are considered to represent the type of scenic beauty “popularly associated with Scotland and for which it is renowned”.[9] The Eildon and Leaderfoot NSA covers 3877 ha, and extends to include the town of Melrose, Scott’s View and Leaderfoot Viaduct.[ 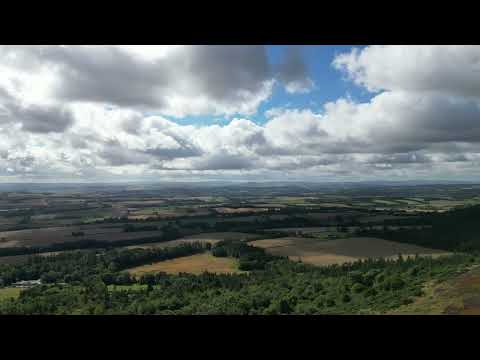 thank you for your comment makes it worth while, and i thank you again. there was of editing involved, as there was a mini 3 pro update it didnt go down well when using the dji rc controller, small corrections on the joystick where very difficult to see on the rc screen, ie when looking at the screen and putting in an input was very difficult to see the responce of the drone movement on the rc screen.

Still a relative newbie, but addicted, started with mavic mini, two weeks later, mavic mini 2, but slowly slowly catchee monkey, one day i might obtain the same sort of result

Trust me once you are confident in flying, the video is the easy bit as the drone does all the work. Mini 2 is a great drone and you can make quality drone videos with it.