Through the ginnel, across the road and behind the houses is a field about 100 metres across. So that’s 50m from houses taken care of. It’s ideal for testing aircraft and that is what I did this afternoon. I spent an hour flying an Inspire, packed everything away in its Peli-style flight case and dragged it back home. I spent some time looking at the Airdata logs while the pix and video uploaded to my PC. After an hour or so I idly glanced at Facebook. 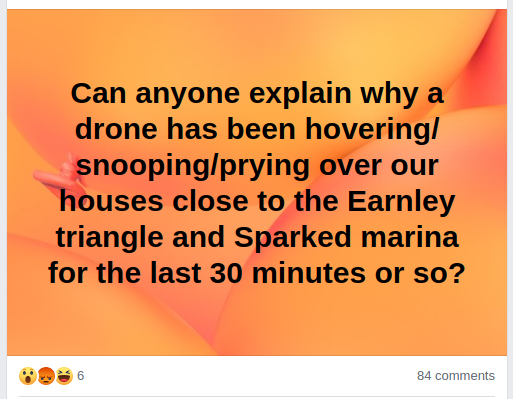 There was speculation about searching for a lost girl reported 7 miles away, Environment Agency Flood check, casing houses for burglary and long-lens pervert spying on people.

It had been running for about an hour. So I replied: 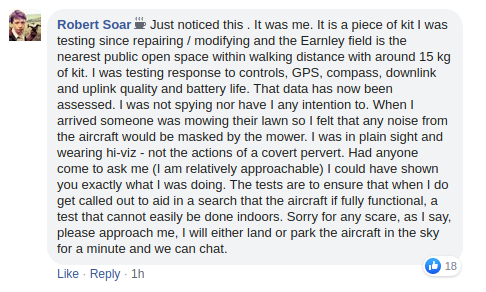 It’s the first time I have ever had any hassle, which could have been solved if only someone had asked me, the pilot, rather than the wise and sagacious speculators of Facebook 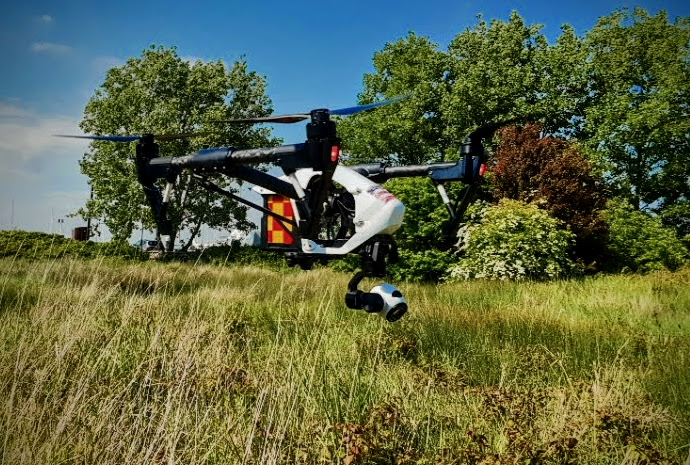 And now we are all friends again! 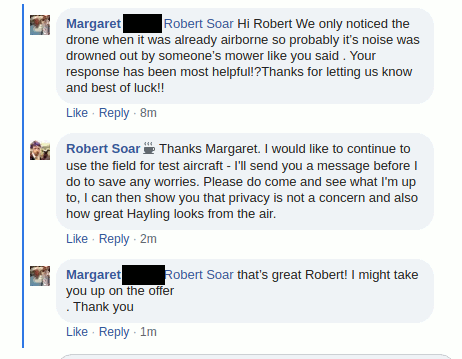 Are you from the west riding ?

Are you from the west riding ?

I’m a non-shandy-drinking Southern heterosexual but I went to <Manchester Poly as an art student in the 70’s, stayed up there and worked in both Lancashire and Yorkshire and picked up various words that I liked. Ginnel is better than “alleyway” or “path between two houses”.

So I often use words out of geographic place or from ;literature - Brave New World or Nadsat from Clockwork Orange, or Newspeak from 1984. It’s also fun to drop a bit of Polari into the conversation. I like the English language, like a river, apparently rolling serenely along but, over time, wearing away this bank or that and creating a new course for itself.

Well, you did ask!

I only ask as the wife (York girl) will insist on calling them snickets, it’s a North Riding thing I believe where as us Leeds folks always use ginnel.

Do you Morris Dance too

That is a nice pic Rob. 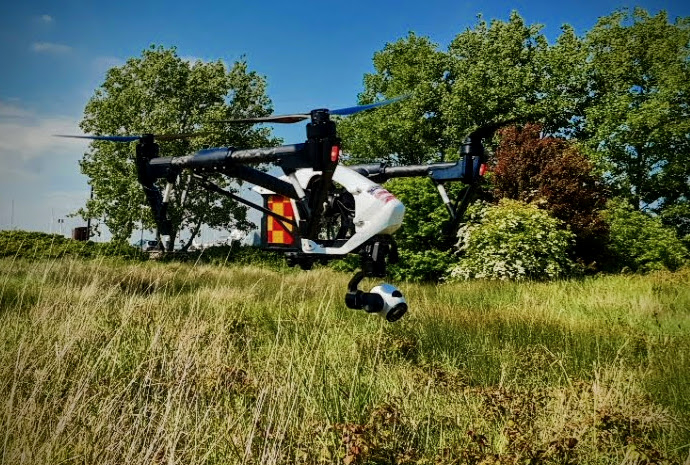 I thought snicket was a southern term as I first came across it in The Fall and Rise of Reginald Perrin where Leonard Rossiter as Perrrin would make a daily journey to Sunshine Desserts, starting by walking down Tennyson Avenue, left into Wordsworth Drive and down the snicket into Station Road.

I have only just remembered that the writer, David Nobbs, although born in Petts Wood. Kent and educated at public school and Cambridge, began his writing career on the Sheffield Star so could have picked up the term then.

That is a nice pic Rob.

Thanks! It was a nice day and the field is at its best. Just grabbed a couple of shots with my phone.

It was “up the entry” when i was growing up in Coventry.

It was “up the entry” when i was growing up in Coventry.

I’m feeding the local Facebook pages with local views (as are a coupe of others from the Island who have dropped in here . Public reaction has been great and we are being asked for more pictures.