Someone has mentioned about flying over railway lines. Now, I assumed that railways are like roads in that you can pass over them but not fly along them. In total I was probably actually OVER the lines for about a second for each time crossing. I would be grateful if someone could tell me definitively on this matter. Blimey, this drone lark has a steep learning curve lol.

There’s nothing from the CAA that says you can’t fly over a railway line. 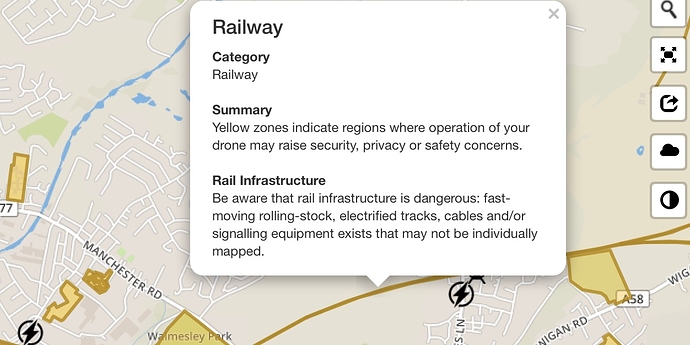 As with all fights, some common sense will always prevail

Thank you. I think you are confirming my thoughts. 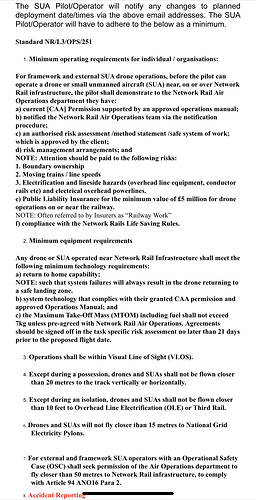 Blimey. What a polava. It sort of smacks of the National Trust who say you cannot fly a drone over their land (or should that be ‘the people’s land’), when in fact they can only stop you taking off from their land. I do feel that there is too much ambiguity and definitive rules, in easy to understand language, should be made available to both flyers and non-flyers.

I can say that I was not closer than 50m vertically or horizontally to the lines (do network rail or CAA own the airspace 50m above the lines?). Each flight was VLOS. I believe you can cross a road legally (so long as you don’t fly along it) Are they saying that if you are flying some land that a railway cuts across, you have to land the drone one side of the rails, find a way across the tracks (could be a mile away), go back to where you landed, and then take off again on the other side of the tracks?

So is that Network Rail rules or the CAA? As in Pingspike’s post above, the CAA don’t seem to state that you shuldn’t fly over a railway, but be aware of the dangers.

very frustrating when your trying to earn a living from it

I can imagine. I don’t envy you.

@Brian is our resident train expert, hopefully the tag will wake him from his slumber

So is that Network Rail rules or the CAA?

You need to ask?

I’ve been on duty for 12hr shifts for last 5 days. I’m dealing with a ‘one under’ at the moment so will get back to you within an hour.

A bit of background.
The person at Air ops is an ex police man and I have had dealings with him. I cannot possible say anything on a public forum but if anyone cares to DM me!!
But basically as long as you are complying with the air navigation order and additionally if you are a pfco holder filming commercially then you follow the pfco rules for risk assessment etc. …Everything NR does has a standard that employees or contractors have to follow, as you are not an employee or contractor to NR, then the ANO and pfco rules will apply. I understand your sensible prudence in asking NR… Crack on.

I’ve looked at the National Trust byelaw article 11that they refer to, to say it prohibits drones from flying over their property… Get this…
It was written in 1965!!!
It refers to a conveyance, that must not be parked or driven on or over NT property. This includes land, air or water. Now according to the Oxford dictionary, a conveyance is something used for carrying people or deliveries. I suspect the quango that is the NT cannot get drones banned from flying as the CAA oversee the air, so are using a byelaw written in 1965 to try and bully people into believing they can stop you flying.

I’ve tried to copy the N trust byelaw onto here but I’m very busy at moment, when I get a few mins to find the file I’ll send it