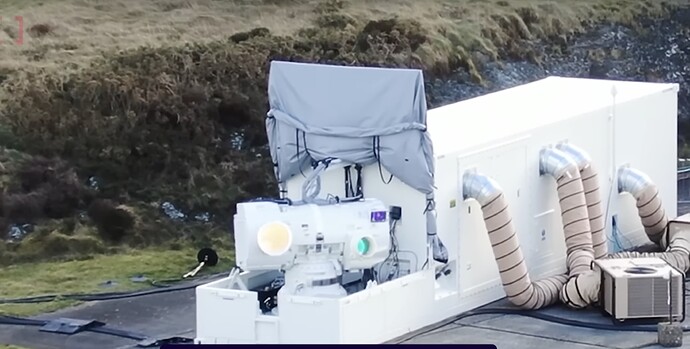 Soon to be field tested in Ukraine is my guess.

That’s a slow laser travelling at the speed of sound!

Lasers are useless in rain

Tell me about it…I had 3 yrs @ Brawdy Naval Air Station Pembrokeshire in the 50s and winter really was winter…rain rain rain & snow… snow. snow and the accomodation was Nissen and Seco huts with “pot belly stove” to warm the hut and a walk of over a mile to the Tower and airfield in all weahers.
Rig of the day seaboots and oilskins…

My Aunty Lilian Raymant was based there, she was in the RAF. You may have bumped into her

RAF vacated Brawdy1946 but returned some years later with helis and something to do with th US …they had a SOSUS listening post manned by the US Navy
Brawdy itself srill has its runways in good condition.,but is disused now.
Interestingly when I was there
The Commander RN of Brawdy was Cdr Cameron VC (midget sub
operation against Tirpitz).
Commander (AIR) was ‘Winkle’ Brown for whom I did office work.
Lt Commnder Flying was ‘Hoaghy’ Carmichael. the first chap to shoot down a jet (MIG in Korea) whilst flying a piston engine aircraft (Seafury)…
Senior Heli SAR pilot was Dixon-Childs who flew a Swordfish against the Bismark.
Quite a crew in one place!!

That’s what I was thinking. Obviously the reporter never noticed the error.

As you say, a somewhat distinguished bunch of gentlemen. Commander Brown is one of my heroes, what was he like as a boss?

He was always ok to me but would not tolerate even the slightest cockup… I once witnessed (heard him along the corridor in his office) rip a young Subbie off something horrible. I felt sorry for the guy.
20 yrs later the subbie walked into my office at the airport I was at… a fully fledged BA Trident Captain!..
I flew with Cdr Brown in an S51 heli looking for the rubber Moby Dick which broke away from the Gregory Peck film set in Cardigan Bay . Never found it…
That heli took off a while later and autorotated at 600 feet as a test and a rotor flew off. Killed 3.
Put me off going in a heli ever again I can tell you

White Sands Missile Range, New Mexico in 2013 and at Eglin earlier this year, and now Boeing says that it has managed to engage 150 aerial targets. And not just in the clear, sunny skies of New Mexico, but in the windy, rainy, and foggy conditions in Florida that whould normally make for a bad day for the lasers. But the HEL-MD still managed to deal with its targets, including 60 mm mortars and unmanned aerial vehicles (UAV).

Neither rain, nor fog, nor wind stops Boeing's laser weapon destroying targets and the technology has progressed by leaps and bounds since then.

I used to be a passenger in Cessna fixed wings and take aerial photos. First time I looked at the control mechanism and realised it was little more than a cogwheel, bike chain and wire cable I began to wonder.

Then we progressed to an Enstrom jollycopter - Lycoming flat 6 with a big, wide rubber belt to drive the rotor gearbox. When you hear jokes about the elastic band snapping that could possibly happen, although they are inspected more regularly and rigorously than a car timing belt. I did have the odd concern about the Jesus bolt though!

Nearer My God to thee…
Took a jump seat B737 trip one night…Down to Palma for duty free run
Landing back - on about a half mile final a flap warning horn sounded… balls to the wall…retracted the lot - and went round…frightrned the crap out of me!..
Bloody aircraft eh?

Must have a hell of a punch…