Due to a series of unpleasant events, not excluding a couple of deaths, unscheduled visit to the hospital, and pan handling relatives, I’ve been even less social than my usual day to day grumpy Victor Meldrew hermit lifestyle over the last couple of weeks.

To correct the balance I’ve just added another quad to my “Historic Drone Preservation Project”. Yes, I’ve given my sickness a name.

Long before DJI’s FPV Drone was a glint in Frank Wang’s eye there was an attempt to bring a HD link to the FPV Racing masses by a company called Amimon, in the shape of their Connex Prosight FPV system. By today’s standards when compared to DJI’s HD and Fatshark’s Shark Byte it’s a bit on the clunky side, as you’ll see in the picture below, but the actual quad it was supplied with is something DJI should have looked at, as Amimon described it as near indestructible.

The quad uses a F3 Cleanflight flashed flight controller and four separate BLHeli ESC’s. The RC system, including the controller, is based around the FlySky system but can be swapped for any other PPM or SBUS system. The body is a one piece carbon fibre monocoque, similar to the TBS Vendetta, and carbon fibre tubular arms are held on with ‘O’ Rings so that in the event of a crash they don’t break.

At the time of its release the Prosight HD system was intended to compete with DJI’s Lightbridge system. It only supported 720p@30fps and 720pi@60fps but it was cheaper than Lightbridge and boasted a latency of around 10ms compared to Lightbridge which could be anywhere upward of 500ms.

The Connex Falcore quad has long been discontinued but Amimon are still very active in the HD video link market for drones and other video platforms that require a cable less connection.

Below is everything that was supplied with the Connex Falcore Prosight FPV Quad package. 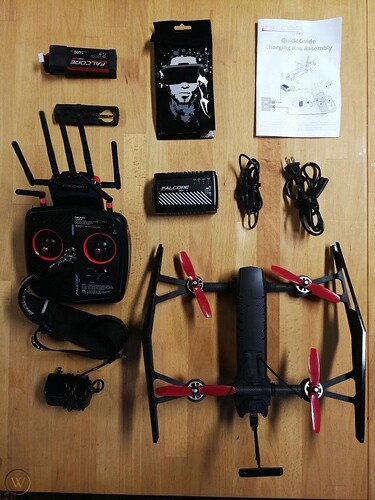 Like the DJI FPV drone it was touted as being an introduction to FPV Quads. As well as the protective side bumpers, which are removable, it also has a mode called “Shield”. In this mode you can push the throttle to maximum and the quad will remain a maximum of 3ft above ground which is maintained with the use of bottom mounted ultrasonic sensors. The pilot then only needs to use the right hand stick to pilot the quad, with the aid of yaw and aileron mixing for coordinated turns. In this mode it has a maximum speed of 30mph, and their is a panic button on the side of the controller which will stop the quad in its tracks and perform a controlled landing. The other modes are Horizon and Acro but the panic button works in these modes also.

I’ve been wanting to add this to my collection for a long time. New the package was around £1,000 (2017) and they rarely pop up on the used market. Thank goodness for eBay and my obsessive behaviour.