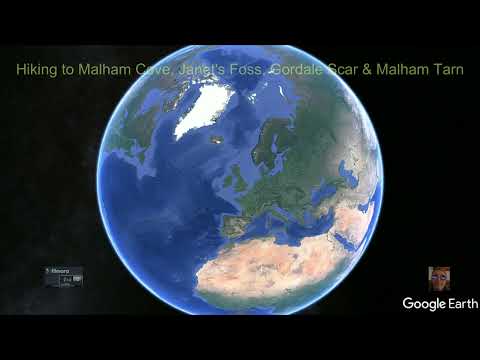 Created this video, from stills and drone clips, as a kind of vlog of our walk in the North Yorkshire Dales. Started from the Watersinks Car Park, Malham. It wasn’t my intention to feature any of the walks amazing featured highlights in any great depth and was made more as a flirting glance of the awesome geological landforms you would come across should you be tempted to follow in our footsteps!

Malham Cove is a magical place to visit and is easily accessible from Malham. The National Trust owns the land leading up to Malham Cove but not the Cove itself so no drone restrictions.

Janet’s Foss is a great place to go to especially if your into wild swimming. Limited parking in the area but the roads are close by. Look out for the caves behind the waterfall and the Legendary fairies that live within!

Gordale Scar is a limestone ravine 1 mile northeast of Malham. It contains two waterfalls and has overhanging limestone cliffs over 330 feet high. The gorge was formed by water erosion from melting glaciers that over time created a cavern that eventually collapsed. Once again no drone restrictions here but watch out for crowds at peak times and, of course, those cliff walls! Those wishing to visit without walking miles can park on Gordale Lane that leads onto Hawthorns Lane near Gordale Scar Campsite and Refreshments van. A well maintained path follows Gordale Beck through the gorge to the Scar itself.

Malham Tarn is located just off the Pennine Way route through Malham not far from the above mentioned car park. It’s the highest freshwater lake in England and well worth a visit. Unfortunately, we arrived in low light towards the end of the overcast day so the quality of video suffered a bit!

There are many circular walks publicised on Google that take in all the features covered (and many many more) but my favourite is Walking Britain, which can be found at the following link:

Walking Britain - a FREE resource for walkers, walks and walking.

Lots to see and put together - thanks.

@MA2flyer Thanks Barrie. I really enjoyed the walk with my brother and his missus and it was the 1st time I’d taken my drone on a hike. DJI Osmo 6 is on order so my ground based vids dont shake like a crapping dog!

saw a guy do it when we visited a few years ago ….no idea what the outcome was

The missus dropped her walking pole down one of the cracks! I’m 6’ 1" and I was at full stretch to get my finger tips on the top of it! Ankle breakers and like ice if damp/wet.

That was well put together, Colin. Really enjoyed it … and it looks like you did too

@clinkadink Cheers Chris. Means a lot coming from you! Still got a long way to go with editing but learning more each time I do a vid. Pinched the Google Earth thing from your type of vids.

Getting a mini 3 soon so hopefully improve further.

Still got a long way to go with editing but learning more each time I do a vid.

We’re all in the same boat there

Pinched the Google Earth thing from your type of vids.

And I pinched it from someone else

You’ll love the Mini 3. It is defo my go-to drone now

Thanks for a great video. The sheer scale of the cliffs are amazing to see from above. Well done.I will make an effort to go there sometime.

I will make an effort to go there sometime.

Thats great. Like I said in the YT vid description, I intended it to encourage people to visit. The vids nothing on taking it in for real. You’ll love it!

Nice one Col👍. I did a walk around abouts last year, I think it was my 3rd vid with the mini 2. I’d wanted to go for about 4 yrs, but could never get a good enough day, finally last year I got there! Everything you say about the place is bang on, and more, I love the place👍.
The one thing I will say, which caught me out for flying the drone, was when there are Peregrines nesting there, there’s no flying allowed. Tbh, I was gutted a tad at first, but it was a lovely day and the Cove, Scar, Tarn and Janet’s foss more than made up for not being able to fly the Cove.
Cheers Col, nice vid

and I’d recommend anyone to go visit the place, you really don’t need to be into hiking and the likes, every site is within quite short walking distance.

@Leylo1971 Cheers Ady. I go to the Lakes and North Yorkshire every year with my brother in Oct as it’s the month of our Wed Anniversary (we had a double wedding with our respective partners before the comments and rumours kick in

) and we love it! Only got my drone in Feb so it was 1st time taking it out on a hike.

when there are Peregrines nesting there, there’s no flying allowed

Didn’t see anything about the nesting peregrines? Have always assumed birds breed around Mar/Apr and move to lowland areas like estuaries and farmland in the winter.

Thx for the heads up will add to my list of pre-flight checks.

What I also liked about the places was they were wheelchair accessible in the main.

I went on the 2nd July, my birthday, I’d got onto the fact there was police notices pinned at various points of entry towards the Cove informing of perigrines, warning people not to fly. I entered from the country lane, the one that brings you down from the Tarn, walked across and ended up on top of the Cove. It just so happened, that’s where the birds were nesting. They give us a great courtship flight and playing about and stuff. Brilliant. Also there were a lot of pro snappers, with lenses as long as your leg…there was me getting stuff with me smartphone

. If you get a chance to go there while their mating I’d recommended it​:+1:. I believe they roost or nest there every year apparently.