Home Made Tablet Holder for MP

Bought a MediaPad M5 lite 8 after seeing a few comments on her about it.
Must admit now I’ve got it. It’s good value for money.
Wanted a stand for controller but decided to knock one up using bit of alloy plate and some GoPro mounts. Seems to sit where I like it. Just waiting for case to arrive for tablet then I’ll mount the GoPro clip on that. 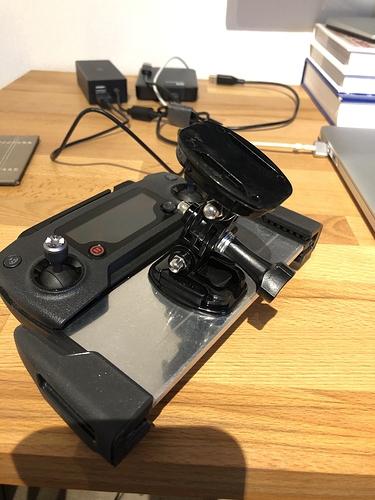 I’ve got a tripod-to-GoPro mount that could be screwed onto the plate. Could be more compact than the awesome GoPro sticker mount.

Don’t have a tablet atm, but always disliked the usual front weight balance appearance. I can imagine this is quite neutral - although the overall weight will still suit a lanyard for point flights - which might be less easy with this?

Food for plenty of thought, though!

Cheers.
I’m also knocking a sun shade up. Using some black picture mount board. I’m going to cut it with flaps that will fold under the tablet case. I’ll use some Velcro to mount that to case.
Had a little test on a piece of mount board today and it folds well if scored first. Bit of duct tape along outside of folds should brace it a bit.
Running with my motto “It’s a low cost operation”.