How to turn a Negative Day, Into a Positive One!

Firstly you must excuse probably my longest post, but, I do hope you agree it is worth the read !!
(@Papercrane please chime in if you have anything to add, or I have missed anything out !)

Well !, our day started early 7am !
Myself @Papercrane and His Lovely Wife Anisa made our way to Wells-Next-Sea to rendezvous with our Latest Member @UnluckyTimmeh!
We arrived at the Wells Quayside to find it crowded with people who were taking part in the “Wells Triathlon”.
We moved to an area away from the crowds and I got my Mavic Air into the air.
(Anisa had wanted to photograph a “Metal Statue of a Horse” which was in the Harbour, before they removed it later this month.)
It was some 100yds away on the far bank of the estuary.
I flew around the Harbour Area, while Russell got his Mavic Pro ready for flight.
I got some great shots of the “Horse” and returned to land for Russell to have a flight.
Just as he was about to get airborne a “Port Authority” gentleman came over and said “You are not allowed to fly that thing here”!.(I thought “Here we go again !”
I, (wearing my now Famous “Negotiators” hat) entered into dialogue with the gentleman, about this and that, he then got on his radio and called for assistance.
This time “The Harbour Master” himself came over, and I asked why we could not fly as we were on “The Queens Foreshore” !.
The Harbour master replied “I hav’nt Seen You, have I !”
With that to avoid confrontation, we packed away our gear, and said that we were going to head to the Lifeboat Station Beach where @Sparkman999 and I had flow a few weeks ago !.
He promptly said “If you go down there they will confiscate your drone from you”!
The Harbour master then returned and said “You can come and fly your drones and take picture of our Triathlon for us if you like”? I thought “This is a sudden turn around”!
Not to miss a chance like that we said “What Time Does it start” “11.10am” he replied.
We said “we’ll be back at 10.45 !”.
We then went and parked near the Lifeboat Station and met up with Tim.
We chatted and exchanged ideas, etc as we headed for a not to crowded beach.
Walked over to and area where there was no one around.
We spotted a Phantom 3 or 4 flying VERY high in the distance, buzzing around mindlessly. And all commented on his irresponsibility !.
Russell got his Mavic Pro up, and had been flying for only 2 or 3 mins, when out of the corner of my eye I saw a man walking towards us.
I whispered to Russell “There is a man, with a broom, heading this way”
He said straight away “Can you land the drone sir”!
“You are flying on a private estate, The Holkham Hall Estate”.
Once again !, I entered into dialogue with this gentleman about the Drone Laws, etc,etc,etc.
The conversation was light hearted and friendly. And even asked what could he do about a neighbour of his who had Racing Drone, and was flying in a Private field adjacent to his house at Sculthorpe.
I advised his of what the Drone Laws are, and he seemed interested in what we said to him.
Once again, we packed up, vacated the beach, and returned to the car !.
We said to Tim “May see you up the other end”!
We then headed back to the quayside area and parked the car.
We then loaded up with our drone bags and fought our way through a fairly large crowd.
We went back to our first stop and saw the first gentleman, and he pointed us over to “The Harbour Master”
“Right Guys!, You go over there and Fly from the Port Authority Pontoon, no one else will bother you there”
Russell, Anisa and Myself were then escorted to a wooden pontoon jutting out into the estuary
WITH NOT A SOUL IN FRONT OF US ! , apart from a ever rising tide ! (and a even closer “Horse” statue !.)
We then prepared for the start of the Swimming Section of the Triathlon, and we both agreed that I would cover the start and open water section of the race, and Russell would do the bits (later) when the Competitors came back and were getting out of the water.
The race started, and I took off and I got some great shots of the swimmers as they progressed the half mile to the turning bouy, the swimmers were split into 3 groups starting about 3 mins apart.
I also took shots of the ever swelling crowd on the shoreline, flying sideways and parallel to them.
The first gentleman (who we had had our first altercation with) then said
“There are some Hi Vis vests for you over there in my bag” I then went and collected 3 of them from him and Anisa fitted one onto Russell’s back , as he flew !
I donned mine and off we went ! “You are now Official, no one will stop you with them on” said the gentleman (who I found out was called “Dell Boy”) (I did ask him in jest) “Have you got a brother called Rodney”? We then had a great laugh about the fact that he looked like “Grandad”

Then Russell took off as I came into land to change my battery.
He done some great work in filming the swimmers as they came over to the landing staging area.

I must add !, this was the VERY first time Russell had ever flown over ANY sort of water !!
(Talk about a “baptism of water” ,literally !!)

Seriously !, he done really great, and I was proud of his safe flying, and he had clearly put aside his visible nerves and done great footage of the event, with the watchful eye of Anisa to help as a spotter.
We then both took to the air, keeping an ever watchful eye on each others drone position, and between us, I believe, got some great footage of the event.
The swimmers section then finished and we packed away our drones with a smile a mile wide.
We were thanked by the Harbour Master (who thrust his personal business card in my hand) and said
“Looking forward to seeing the footage, Guys”.
We the headed back to Norwich, feeling just a little bit pleased with ourselves.
I think our day had/has taught us both a lot !.
I would say a PfCo Training flying session would be a walk in the park after today !.
I must add, that at no time were we offered or asked for any financial remuneration for our efforts.
I would willingly do it all again, just for the experience !.
The moral of the story:
Turn a negative, into a positive!, I can assure you IT WILL MAKE YOUR DAY!!, it did ours !!
I should add Mods that I Definitely think that a “I was Baptised over the Water” badge should be available, and also “Prime Negotiator” Badge.
Finally !, Is it just me !, or is it every time I am with Russell, we have an altercation!
Or is it because He is with Me !!
Great Flying ,Great Company, Great Experience !
Thanks for reading !
(Footage/pictures to follow)

A good result! … and I look forward to seeing the results!

A bit like I was saying on the Feeling Uncomfortable thread the other day, there can often ways to end up with a better result than one was initially after when someone challenges you.

I have to say that was an amazing opportunity and thanks Chris for taking the lead on the negotiations.

I broke several massive ducks in this one. First time flying over water. First time trying to get footage of a event where time is critical. First time operating with two drones in a confined space.

I was extremely nervous on this one - half expecting my drone to drop like a brick as soon as I got it over the water, but it didn’t, and the experience taught me a lot. I soon got to the point of forgetting about the water and just focusing on getting the shot. Then turned around and did a double take at just how low down Chis was flying!

This was easily the most challenging flying I’ve done to date, and definitely the most rewarding. I’ll be editing the footage over the next couple of evenings - it looks good.

Comment of the day goes to Chris though: “we are the official flown driers today”. He seemed a bit puzzled why we were laughing. Myself, I’ve never got an Indesit off the ground.

“we are the official flown driers

Like It Jeff !, but seriously, we are learning all the time, about peoples attitude towards us (meaning ALL drone pilots).
I hate confrontation !, but, I will not allow someone to puff smoke up my arse!, and tell me its on fire!, when I know what they are saying to me is not right !
And, I am not frightened or phased by anybody who wishes to confront me !.
I have had several (recent) episodes of that !
All I try to do is enjoy myself, sometimes in the company of other like minded people ,like yourself and everyone, and anyone I meet on my travels.
You could say I am enjoying my second child hood !.
So, what, I am happy, to hell with the Muppets of the World !!

we are the official flown driers

Oh!, Yes, how could I forget that bit Russell ! (no you didn’t !)
Still cannot believe I said it THREE time, and never realised what I had said until Anisa and You were laughing at what I had said !
So now Guys we are not “DRONE FLYERS” But ,“Flown Dryers”
And a MASSIVE well done Russell, I personally give you my own “Nerves of Steel” Badge !

I should have also added that I was wearing my GADC Logo tee shirt
“Never Under Estimate an Old Guy Flying A Drone”
The next shirts Russell and I will be wearing will be GADC Tee Shirt !!
(When my mate gets “his finger out of his Fundamental Orifice”

Add one to the order for me.

And a MASSIVE well done Russell, I personally give you my own “Nerves of Steel” Badge !

Haha I’ll take it. Not sure I deserve it, but better than a ‘Not Completely Chicken S***’ badge.

Careful for what you’re glad you don’t have. 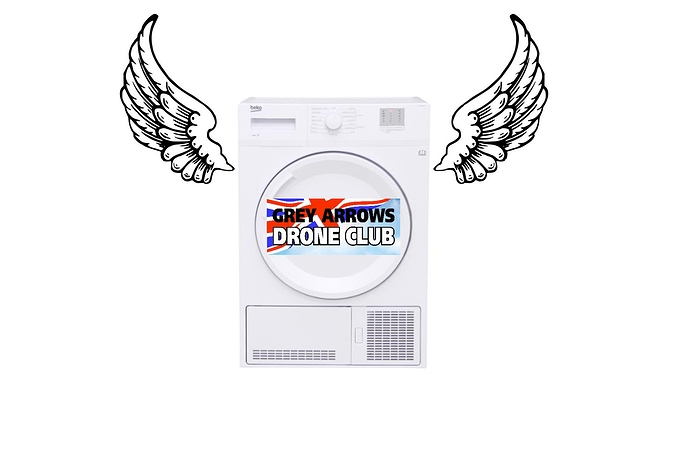 That can probably manage great acrobatics … ones with lots of tumbling.