I think I am making some progress

In that I don’t crash quite so often, err now…

Today I strapped on my old Gopro Hero 3+ to my FPV quad using a broken waterproof housing and took it out for a spin… with it being really wet, I managed to get water on the props, clipping the grass, which in turn ended up over the FPV camera, so flew looking through a really obscure opaque window. The first crash was as a result of not being able to see properly. The second flight was slightly better in that there was less smear on the lens, but it still wasn’t great.

I’ve now moved the fpv camera higher in the frame to reduce the amount of debris I was getting on the lens and also to get the props out of the field of view, as much as possible.

Something else I did a while ago was to reduce full throttle to 75%. 100% throttle was insane (way too quick for me).

Normally when I go out I carry a spanner and spare props. I didn’t today and guess what? Having said that it was really muddy in that field and by the time I’d walked back to the car it felt like I was wearing extra heavy 70’s platform shoes! 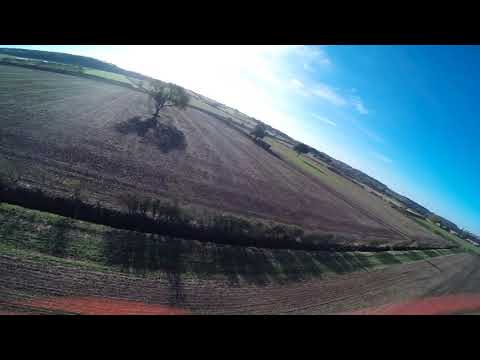 Having fixed the prop and moved the camera I went out again later on, to a different location, and had two really long flight with no crashes!

Looks like a great place to fly, with plenty of trees to surf over