Is this a genuine mavic air gimbal cable

Hi I purchased a cable for my mavic air from aliexpress,description was used cable but in working condition, I installed it onto the gimbal but comes up with error 200 the same as my other non working cable,I’ve tested the gimbal with a known working cable and it’s fine ,so it’s def a cable problem,on further looking at the purchased cable I believe it might not be genuine so came here to see if anyone can confirm for me.thank you…

For my MP I’ve managed to buy brand new from the UK at sensible prices (eBay), and saved a load of time and hassle.
For something so cheap i wouldn’t bother getting used from anywhere, least of all the likes of Aliexpress. 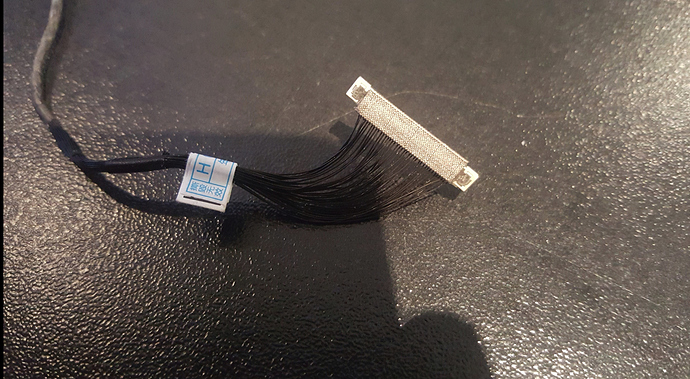 Also, your question “is it genuine” is pretty much impossible for anyone else to answer.
Working is working, not working is not working … genuine or not.
It’s a cable, nothing that difficult.
I’ve had more than one make of cable that are all genuine.

agree mate,i just want to confirm if its original or not as to get a refund as description said it was genuine,ill get a genuine one next time,we all learn from our mistakes

my original cable has like a qr code on it ,the one i bought has chinese writing on it ,only inquiring thats all…

The cables I’ve bought have looked slightly different in each instant, but been in a genuine DJI bag with a QR.on that.

Just looked through my bits - the eBay seller I’ve come to rely upon goes by the name of Rantow.
AFAIR … cables have always been in sealed packages and never had a problem with them.

,i just want to confirm if its original or not as to get a refund as description said it was genuine

There is no need to prove if it is genuine or not, just ask for a refund or a replacement. If the cable you received was faulty, should be no problem.
Good luck

Also, your question “is it genuine” is pretty much impossible for anyone else to answer.
Working is working, not working is not working … genuine or not.
It’s a cable, nothing that difficult.
I’ve had more than one make of cable that are all genuine.

Hmmmm I’ve read of non genuine Chinese cables which are hit and miss if they work,I just need conformation if it’s genuine as that’s the description it was sold under…

If the one that you took off was the original then compare it to that, check for any part numbers. I’ve never had a need to take mine apart so couldn’t say what it looks like.

Let me expand on my “laying in bed with only one eye open” posts, early this morning … derived from much searching for quite a few repair parts to purchase “on the cheap” (and some things the Chinese wife of a friend has told me about what happens in China).
Some purchases were not the best experience (although one “faulty” purchase worked in my favour - but that’s another story).

UK DJI Dealers … have a limited range of repair parts that DJI allow to be sold retail. These tend to fall into the “easy to replace without open-heart surgery” category.

UK DJI Authorised Repair shops basically are not allowed to sell repair parts and components. I know, because I’ve attempted to purchase the MP video cable (and other things) from several … with equal lack of success. (Although one promised to send me a working used cable for free - but then forgot.)

I very much doubt that anyone, even in China, could make money tooling up to make and sell “non-genuine” repair parts at knockdown prices - there just isn’t a big enough market when most local repairs are carried out by DJI authorised repairers using parts sourced from DJI.

So basically all these small repair parts are what I would call “genuine” … it’s the route by which they are made available that may not be “official”.

These cables (and other parts not available from UK DJI authorised dealers) fundamentally have three sources.

The last (similar, MP) video cables I bought probably came via route 1. The people I mention had quite an extensive range of DJI items, last time I looked. Relatives of workers in China? I dunno - but I’d lay money on that kind of source and route.

They cost just £15 (free postage) and arrived two days after I ordered … so definitely “from the UK”.
They were in the proper bags, properly DJI labels (even if their own label had been applied on top).
There wasn’t any pre-existing “shaping” to hint that they had ever been used before, either.
Most importantly, when your drone is in bits on the kitchen table and you want to get back in the air … they worked.