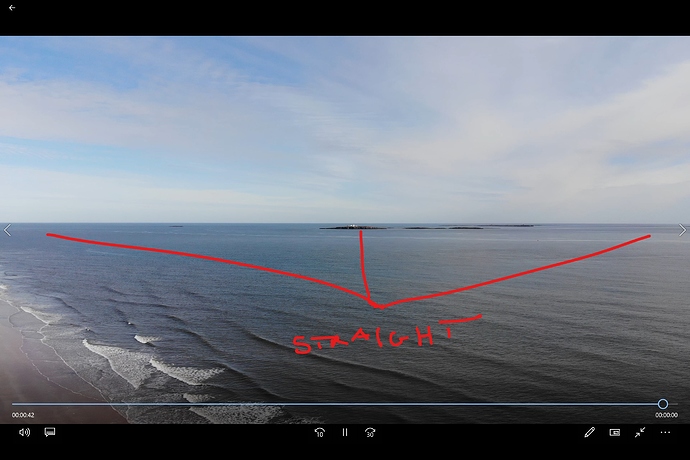 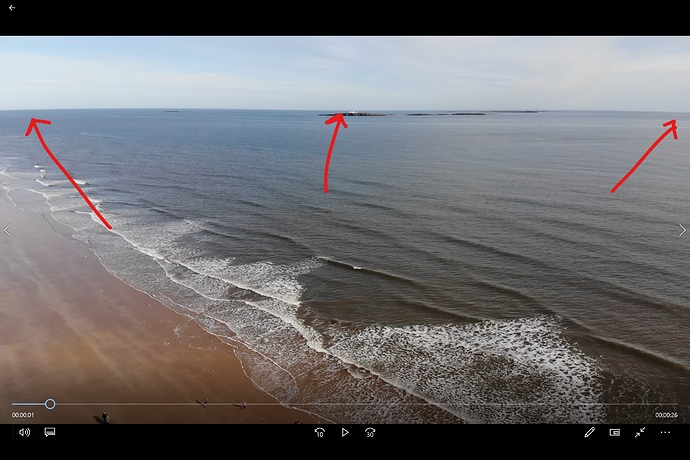 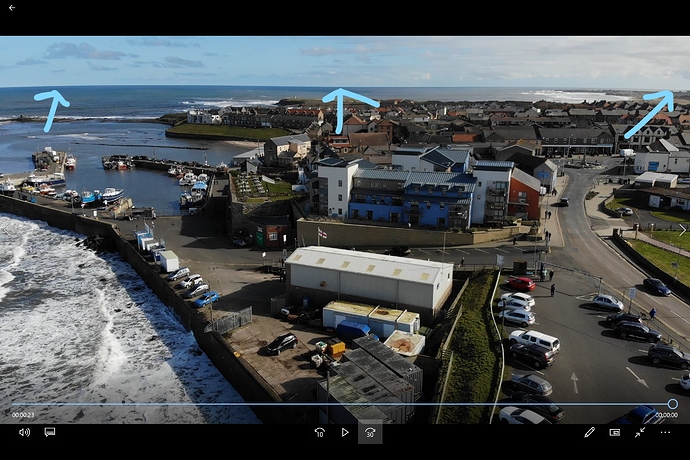 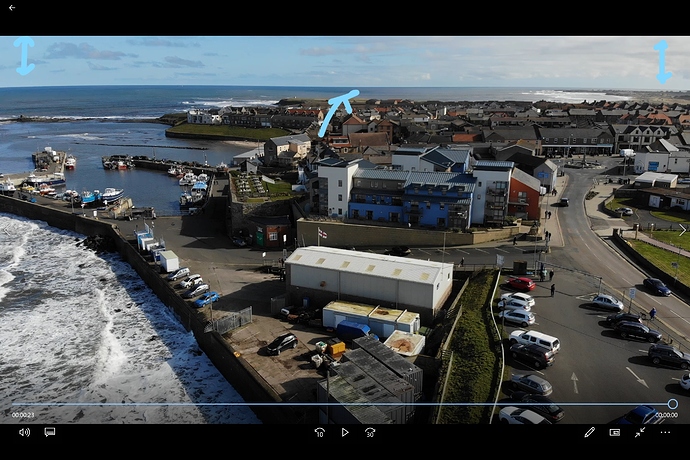 wave%20top%20again2736×1824 1.34 MB
OK is it me.
My lastest check on my replacement mavic air, looks like it has a lens issue.
To me the skyline or horizon is lower at both ends and dips in the middle. This looks like its only the top third of the frame, as one image it looks ok half way down.
When it stops raining, in will try a pan left to right with horizon in the top third, and again half way down.
let me know your thoughts
Thanks
PingSpike March 30, 2018, 2:57pm #2

Not sure Barry, it may well be wonky.

Pinging @Jcborden as he had this exact same issue on his Air:

So after chopping and changing my mind I did get the air and with the shocking weather today all I could do was test the camera in the garden (hand held) and… I’m disappointed, not in the resolution but… well you see if you can spot it. Both endeared except to resize Screen capture from 4K video [image] Photo [image] 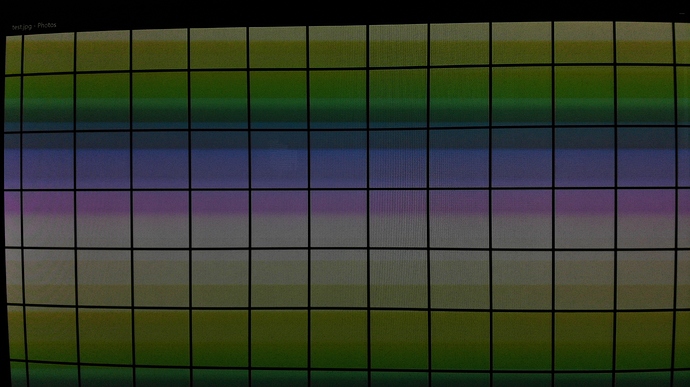 DJI_00324056×2280 3.37 MB
Its an isue with the drones…most are like this looking at reviews
Created a chart and projected this onto my PLASMA then decided to fly my drone towards the screen…mmmmm
@Jcborden did you have same issue
Only notice on sea horizon
Guess land and stuff you would never tell
PingSpike March 30, 2018, 3:09pm #4

Were you holding the drone at dead on right angles to the screen?

God yeah, don’t fly it at the TV

Just stand it on a chair or stool or something and move it around until you’re 100% sure you’re at right angles with the tv screen, you don’t even need to start the rotors to use the camera / take photos

Have done that…wtf…crazy anyway
attached some stills
B 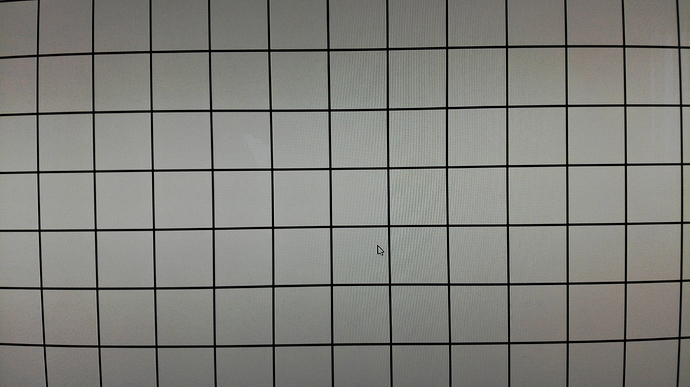 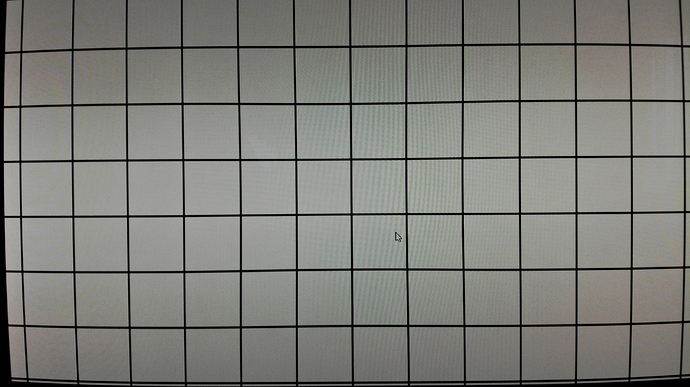 The bottom image is interesting as the centre is spot on, then the further out you go in any direction seems to give it the impression of an old, bulging, tube-based television.

But strangely the distortion, if that’s the right word, is very (very) even, isn’t it?

This is a common problem with the Air, I’ve had two and both showed the same, looking bad on close ups, particularly horizontal lines and in normal use when panning horizons…

However it’s not too bad in general use and most people don’t seem to notice it but once I had I couldn’t stop and see it in lots of YouTube videos, especially those overly sea/horizon shots - you get a kind of camel effect with the sides left/right sides drooping and a slight droop in the middle.

The good news, for photos at least, is that the effect is not visible in the raw photos so it must be some correction that DJI are applying to the JPEGs so they should also be able to fix this with a firmware update. They should also be able to do the same for video as well, however DJI haven’t yet acknowledged that there is actually an issue, despite lots of people mentioning it and in certain photos/video it is very noticeable.

I guess its up to you as to whether you can live with it, but I personally wouldn’t hold out for a firmware fix.

I’m sticking with the Mavic Pro!

@Jcborden thanks mate. I think it would be hard to notice on a lot of stuff, but live only 20 mins from the coast, and have a caravan on the sea front in Northumberland, so would struggle to get away from the sea. Dont know if it would be feasable to fix the video side, as correction on all frames would be needed. I have logged this with DJI and they have asked for examples. Dont notice this with the Spark. Maybe I should check. Its only been a few months since the launch of the AIR, so lets hope.
Presume all airs have the SAME issue, as per my JPEG attached.
Thanks
PS love the Crystal Sky

Yep it looks ok generally, the old pin cushion effect. Let’s hope dji can sort this one out. Not a lot of people realise this is happening, until they get a straight horizon or similar. Annoying as this is not a cheap drone. If I keep the horizon on the mid line or lower third then this should be ok. Would still work with the rule of thirds, which can be broken at some point.
Will keep you all posted.
Waiting for DJI to get back.

Do different videos modes and/or resolutions alter the effect?

I don’t have an air anymore so can’t test, but the camel effect was visible in all video (although depending upon the scene you might have to look for it).

@Jcborden it’s crazy how they can sell this product, more so the fact that loads of people tested it in different situations. Let’s hope they have a fix. You are correct that in a lot of situations you would not see any problems. Tried again yesterday with the sea only one third in frame and you cannot notice, again going over water, land etc even with an uneven horizon we are safe.
Cheers

Shame they haven’t fixed this yet.

At least the raw images are ok, gives you something to work with for landscape shots.

You’d think with such a new product they would have pushed a fix out for this quickly since it seems to be just be the lens correction they are applying to jpeg and video.

@callum but do you think this could be a simple fix for video ?? Don’t know how it’s possible
I know stills can be done easily. But video
Let hope mate, let’s hope
Cheers

Video should just be the same. Your just correcting in camera for distortion in the lens.

What I don’t understand is why the raw files are perfectly straight.

Are they applying lens correction to raw files and not jpeg?

Watched another video this morning and others with Mavic Airs have the same issue, so I think its a Global issue.

It’s like you said though. Most people are not aware of it so not much noise being made to get it fixed.

Few posts on dji forums but no response from Mods.

I’d create a post there and kick up a fuss.