I've bought my stuff and now I'm in trouble. Pointers required for a n00b

[Advance apologies for the epic.]

This afternoon I’ve taken delivery of a Radiomaster TX12, an Emax Nanohawk and some FatShark Recon V3 goggles. I’m an hour in and it’s clear I haven’t got a clue what I’m doing.

I’ve watched a few videos on YouTube including this one and this one. The first is very comprehensive but is demonstrated using a couple of drones that are not the Nanohawk. The second is a Nanohawk, but I suspect there’s a lot of detail missing in his glib, “I’ve got the controller set up so I’m ready to fly”. And I’ve watched this one, which shows how to activate the binding mode on the Nanohawk but is a different controller.

I think I’ve got the controller bound to the drone because I get the voice notifications about “telemetry lost” and “telemetry recovered”, but the red LED on the underside keeps flashing, which the guy in the final video seems to think means it’s unhappy with the switch positions. I’ve tried the switches in all different positions. Nothing seems to do anything.

So I was thinking maybe I need to do something with the OpenTX Companion. Fired it up, plugged the controller into a USB port, switched it back off and back on with the trim levers in position when the companion told me to, plugged the USB back in, downloaded the firmware image when asked, but it still kept saying it couldn’t detect the controller.

I suspect I may be missing a few large pieces of the jigsaw.

But before I can start looking further I notice that dreadful hot plastic smell. I instantly assume it’s the drone battery, as I’ve had it plugged in because I think it’s gone flat while I’ve been faffing about, but that’s cool as a cucumber.

I’ve now let it cool down, put the batteries back in, powered it back up and it seems to be working as well as it was previously, in that I can bind to the drone and it warns me that I’m still connected if I try and switch it off before powering down the drone.

But I’m at a complete loss as to what to do now. I’m guessing the controller configuration is not correct for the drone and I thought the OpenTX Companion might shed a more user-friendly UI on that. I’ve also now found the Nanohawk use manual which lists the stock flight settings, so I’m guessing I need to map these into the TX12 somehow. I also note that it says it is TAER, rather than AETR that the videos I’ve been watching seem to think is standard.

Do I also need to be messing about with Betaflight, or should I be able to get this working without all that?

(I’ve just spent 20 minutes in LiftOff with the controller plugged in as a joystick and no overheating. So that’s good.)

I’m guessing the controller configuration is not correct

I also need to be messing about with Betaflight

in the modes tab. Betaflight is a good diagnostic tool, as well as a setup tool. Needs learning though…

in the modes tab. Betaflight is a good diagnostic tool, as well as a setup tool. Needs learning though…

Thanks. I’m not afraid of learning if there’s good learning resources to be found.

Yeah the wiki is quite good. There’s just lots in it. If you open the receiver tab and modes tab, with a lipo connected to the quad as well as usb, you’ll see the sticks and switches in real time so you can configure them. But take the props off just in case

I suppose this actually tells me everything I need to know…

Nanohawk is configured to take a channel map of the TAER1234 convention. That is
the channel map is in the respective order: throttle, aileron, elevator, rudder, AUX 1,
AUX 2, AUX 3, and AUX 4. The arm switch on Nanohawk is set on AUX 1 and armed
with the highest value. AUX 2 is configured for a 3 stage switch to select flight modes:
Acro, Horizon, and Angle activating in an increasing order. AUX 3 is configured for
the beeper. In a high state the motors will beep. AUX 4 is set to Flip Over After Crash
mode (often referred to as turtle mode). Turtle mode is set when AUX 4 is in a high
state. Please configure your radio as described above or change these settings in
Betaflight Configurator.

So if I can re-find the correct bits of videos that will help me bind the AUX channels to various switches I should be cooking with gas?

Or just put into betaflight modes tab. When you press a switch, it shows you which one it is

Thanks. You’ve been most helpful. I should probably go and eat before I look up and find it’s 2am and I’m still messing.

Use this video as a guide, don’t follow it to the letter as your quad is different to the one hes working with but the fundamentals are the same. You should pay attention to the modes tab setup and the receiver tab setup as this is going to be the same on what ever betaflight quad you are working with be it a tiny whoop or full 5inch freestyle drone. 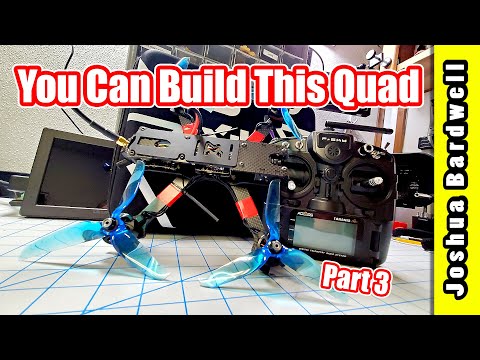 Hope this helps. Also if I was you I would probably sub his channel as well as check out the rest of his videos if you want to know anything about FPV he probably already has a video for it

I feel your pain… Been there…

Well, the video really helped. I needed to reorder the outputs on the controller. All set up and working, I think. It seems to go a bit mental if it crashes upside down: the motors just rev to the max and the throttle had no effect.

Thanks all for the help.

I now have a new pain - learning to fly the damn thing. I think the longest time in the air so far has been about 8 seconds. No control whatsoever.

Best thing you can do is learn to hover. Then hover in fpv. Its all about the throttle control

Yeah I’ll have to put some hours in on the simulator.

I needed to reorder the outputs on the controller.

I once made that mistake with near lethal consequences.

I built a five inch quad for a club member. I extensively tested it before handing it over to him. At the flying field we swapped over receivers so he could fly it with his radio. As soon as we armed it it went absolutely mental and we both hit the deck. The oversight on my part was I’d forgotten his radio had a different channel map so as soon as the quad was armed off a switch the throttle was at 50% and the pitch control was fully reversed causing the quad to spin at high speed back towards us both.

Thankfully since then Betaflight now has a safeguard whereby you can’t accidentally arm a quad if the throttle is above the minimum level.

I have 2 switch arming setup on my quads for that reason. Although in your case I don’t think it would of helped as you intentionally armed it lol

Thankfully since then Betaflight now has a safeguard whereby you can’t accidentally arm a quad if the throttle is above the minimum level.

I think this is why I was getting nothing to start with - the throttle was mapping to the right stick, so it was at 50%. Betaflight was great for showing me that, but it took a little more head scratching to work out how to fix it.

Now I’ve done all (most of) the heavy lifting with learning how the kit all works, I’m determined to get the flying skills so I can actually use the damn thing. If only there weren’t so many other things vying for my time.

If only there weren’t so many other things vying for my time.

I feel that pain it’s a fine balance and I’m tipping in the wrong direction at the moment with things like decorating and returning faulty TVs taking up most of my flying time.

I have 2 switch arming setup

I’ve done this, too, according to JB’s video. Not that the Nanohawk will do too much damage, but if I ever learn to fly I’m sure I’ll be frittering my money away on bigger and more dangerous things.

It’s a good system I also have my beeper setup on the same pre arm switch so the quad also gives off a buzzer to alert that it’s about to arm.

Here’s a thing I noticed last night. I seem to have a loose wire. 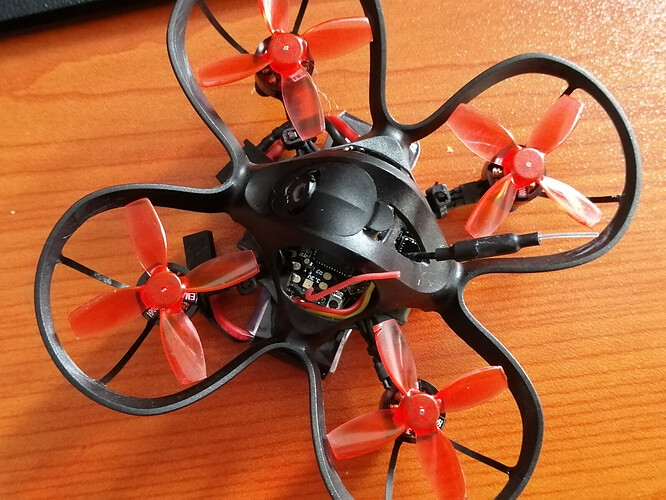 My abilities currently are such that I can’t tell if it’s important. As far as I can make out it is responding as I would expect to the controller, and although I’m a long way from flying FPV, I’ve checked the video and it does work.