I’ve had a search on topics but can’t find any tips.

I often leave my mini 2 in the boot of the car on the off chance I am somewhere and have the time to send it up (doesn’t happen often) but when it has happened the drone has been in the boot for days and the batteries have usually discharged to around 75%.

I appreciate you shouldn’t keep the batteries charged unnecessarily, does anyone else do the same and how do you charge your batteries up or do you just use whatever power is in them?

I’m off to down to Northampton tomorrow for a work conference and am staying near Silverstone so just getting the drone charged in case I have some free time.

just use whatever power is in them?

Kinda guessed as much, not ideal with my track record on forced landings

not ideal with my track record on forced landings

Let them do their thing, and don’t ignore the warnings ;o)

I keep the drone to hand like yourself, but I only charge the batteries when I ‘know’ I am defiantly going to be flying, like this evening. I charged last night, even though all 3 batteries were drained to 20% flying last Thursday night. To be honest though it’s rare I fly on a whim due to work/life balance.

I also keep my mini in the boot, on the off chance get to fly, though unlike the Mini 2 it’s Lithium Ion, not polymor so they don’t need to be storage charged, like LiPOs.

I wouldn’t keep charging them everyday anmd 3 x 80% batteries should get you a decent charge. With me LiPOs for the FPV quads I always storage charge, and don’t charge them till earliest night before flying. Actualyl watched a good Mr Steele Vid last night on LiPo care, and he never leaves them more than 48hrs either way (up to full charge to fly, or back to Storage).

I use one of these chargers. Charges at 2 amps so if I decide I want to head out, I’m not waiting long for the batteries to charge. Charges them from flat in an hour! And does 4 at once plus the controller! 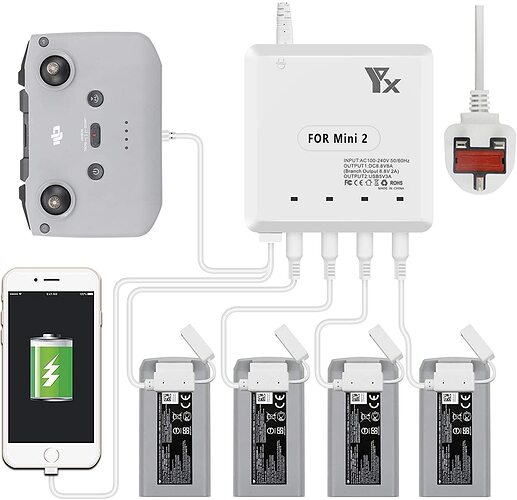 I too carry my drone in the van with me. I just use what’s in the batteries. I’ve got 4 batteries so even at 75%, I’ve still got an hours flying. I also have a 20000mAh powerbank which I use to charge if I need to.

Just be careful doing things like that if they sit for a long time they can show 80/90% charge but will drain at a rate of knots.

Yeah… grab yourself a powerbank and when you head off, you can have at least one of the batteries charging up on the way and while using that one, have the others still charging. I don’t own a car, but whenever I decide to head out, when it’s an on the spot decision, I’ve usually had the batteries sitting about, slowly discharging, so I plug them into the powerbank and head off out,. I f I find a place which I’d like to video or take some aerial shots of, at least one of the batteries will have a decent charge in it and by the time I’ve done a bit of flying with that one, maybe moved on a bit afterwards, the other two usually have plenty of charge in them for any other flights I want to make… Too many people, including myself in the beginning, just want to keep the thing in the air, until the last possible minute, but I’ve learnt to bring it back at around at around 25%, no matter what and since it has to be within line of sight, unless what I really want to capture, is moving and will be gone if I don’t stay up a bit longer, then I will push it down to 20 or even 15%… So far I’ve never had a forced landing. and if it’s something like a sunset you want to capture, then don’t go up until the last minute… and one last piece of advice, plan where you are going and what you want to film or take photos of, don’t hit record until you get where you want to go, it wastes battery. The worst thing is to just put it up there and going flying about looking for something interesting, ten when you spot something, the battery is almost dead.

For my Air 2S batteries, I use the DJI car charger lead. Handy!

Agree totally with you.

If you look in the battery settings once the drone is on/connected to the controller, I think you can set the time before the batteries start to self-discharge. I think the max is 5 days - at least for the Mavic this is possible so perhaps for the Mini too?

The DJI Fly app is lacking some of the more advanced features of the GO4 app, including the ability to edit battery discharge times @mpaull