Hi all.
I’m looking to build a new quad next spring.
I’m a firm believer in “Top down design, bottom up implementation”.

To that end, I want a quad that will do around 5 miles out (then back).

Now. I have crossfire, so the control link shouldn’t be a problem. I will be installing dji fpv on it so hopefully that will cover the fpv video.

Now I know you may think ‘Get a wing’. But I’m used to quads and I like the control I have over it.

I’m busy populating my Banggood trolly with bits, and I will whittle it down eventually.

All inputs are welcomed. Looking for recommendations / ideas.

And @Wyntrblue, You’ll get the referrals.

Long range fpv quad… you want a very light weight frame swinging as big props as you can find on as low kv motors. Your also going to be using lion not lipo…

5miles on dji I think will be a stretch so make sure you have rth on a switch and stuff.

Yea that’s what I would be looking at.

You won’t be doing any flips or rolls with it. Also don’t crash that’s quite a walk!

You won’t get the energy density on lipo. But it’s not gonna feel like an acro quad.

Yeah. It’ll just be for cruising. On my travels

Shhhh! My aim is to go cloud surfing…

Also externally powered beeper and you want to make sure the gps coords are sent back to the radio and logged to the sd card. Also dvr running around all times

Yeah. The Tango 2 saves the coords. (awkard to put in google, but not impossible). BF gps rescue really works well. At least the dji goggles wont be lost

As a yard stick to go by.

I’ve only been out to 2miles with it, this is due to battery capacity/voltage (a 4s would have less current draw). Both the control link and video were solid at the 2mile point, the EZUHF was still showing a 100% link quality (no dropped packets) and RSSI was in the low 30’s (the EZOSD works backward so that the lower the number the stronger the signal).

Two other radio systems to consider are the recently realeased ImmersionRC Ghost which is a LoRa system on 2.4GHz, the receivers are tiny, and the Skydroid T10/T12 which also provides digital video.

I have the Skydroid system fitted on one of my test quads however I did a static test with the air unit mounted on a six foot pole at my flying site and then drove out with the base unit, see map below. 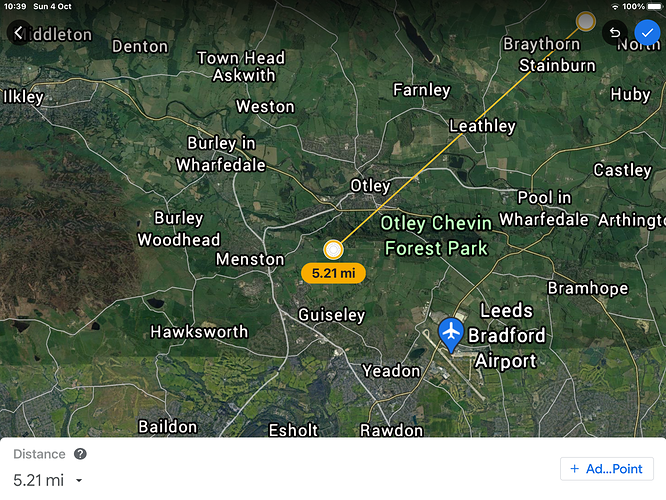 During the drive out I did have video dropouts but this while in very low congested areas, the river Wharfe flowing through Otley is 60m ASL. However at the destination point, which is about 220m ASL (the flying site is approximately the same altitude) both the video and the control link were solid. It’s worth noting that even though the video is touted as being 720p the frame rate is not very high and there is some latency. For steady cruising purposes this is not an issue but I wouldn’t use it for acro/aerobatic flights. Skydroid claim that the T10 system, the one I have has a video range of 10miles and a control range of 20miles. I have no reason to doubt this and I have seen some impressive claims from other users in forums and some YT vids. It is designed to be used with Pixhawk but I have seen some using it with other F4 and F7 controllers running Ardupilot.

With the price, power requirements, and size of LoRa devices dropping I can see other manufacturers taking up the technology. If you search LoRa on Amazon there are plenty of cheap modules to experiment with on all of the ISM/Licence Exempt bands.

Cheers Nidge. I will study those technologies.