There has been complaints in the local nextdoor forum about a lowing fly drone above houses and gardens. ( I had to remove the link which didn’t work, sorry) But ultimately it is these types of issues which can give the rest of us drone pilots a bad name. Even with a mini 2 I d stay clear of residential gardens on a hot sunny day!

Further to that some idiot has now commented on shooting it down.

You have to join the group to view the article

Sorry John didn’t realise. Just quickly posted link in my fury. I have had to remove it mate but I hope you get the idea of my rant!

I hope you get the idea of my rant!

Call me a thick slice of Warburtons, but I don’t get the idea of your rant as it shows 2 sides to a story?

Not at all mate. You’re right, I have presented 2 sides here. Just can’t understand why anyone would purposely fly in a manner where you would risk these types of complaints from the local area. I think that’s more of the point I was trying to convey. I have recently read quite a lot on other threads about the bad rap we seem to be getting and trouble with permissions to fly. This sort of thing doesn’t help.

Let it ride over , they usually do, won’t before long they’re back on the dog shit issue or ‘what’s the best Chinese?’

Just can’t understand why anyone would purposely fly in a manner where you would risk these types of complaints from the local area.

I guess your right, Chris. It was the nextdoor neighborhood forum. Full of busybodies and do gooders! Apart from the guy wanting to shoot the drone down. I,d love to see what they would say about someone firing live rounds over their gardens!!

We have a group like this for our local area and it drives me insane, people get on and all of a sudden think they are an MP addressing their constituents about the blight of heavy traffic when really it’s Brenda who is a retail assistant at asda

I had to leave for this reason as some people’s sole joy in life seems to be taking to social media to rant about the most trivial of issues of the day, and if they happen to see a drone that day no matter on the hight or proximity they would report that it was low flying taking pics of their kids. Its this which is damaging to us as drone pilots. 99% of drone pilots I have met see either too responsible or too scared to fly irresponsibly in congested areas, I fall into the later! Iff my drone was to drop out of the sky Id sooner walk to the middle of a feild to retrieve it as opposed to knocking on people’s doors

Granted there is the 1% of clowns who couldn’t care less for the rules.

Be in the next door ones, the fb pages or groups or something else.

You will always have at least 10 people who know everything and say everything matter of fact.

Then there are the sometimes genuine but also unfortunately often scammy posts asking for help, free something or other etc.

The moaners who will moan about everything from the roads, litter, dog mess, etc.

The people who seek out people to mug off and take a while to get dealt with.

That said as you say if someone was flying a drone close enough to to gardens on a day like.we have just had then they are not doing us any favours. Did mention to the wife that it was one of the perks of living in an FRZ people couldn’t just put a drone up which means it’s quite OK for my kids to be naked in the padling pool in our garden. Down side is I can’t either haha.

Would be interested to read the original post if not to see if was the typical unproofrwad drivel or thought out grievance.

I used to take requests from members of a local Facebook group for 360s over their streets, always from 50m up. Posted them back in the group. Left it when the admin added a stack of rules, reminded me of the scene in one of the Harry Potter movies when the janitor is up a 30’ ladder nailing another rule to the wall

Hi Chris. I have took a screenshot of the OP. It’s the only way I could think of posting it on the forum, mate. See below. 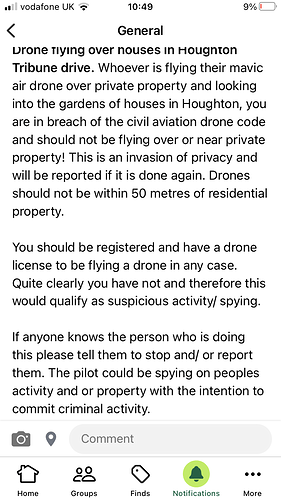 See that’s made me more curious. They know enough to know it’s w mavic air (or is this the first hit they got on Google) but waffle on.

Sounds fishy to me. Ironically other than the privacy element if it had been a mini/2 would have been such a breach.

Even if it had been a mini/mini2 I still think it’s not a good idea to do this sort of flying, although I do agree it wouldn’t have been such a breach of regs. Can’t remember who it was who said it but I recall watching a YT vid just after the rules changed at the beginning of the year and they had commented on flying from your back garden. Not the best idea in a built up residential area. If you did, to get up as high as possible, quickly, get the footage you need and land again. As @milkmanchris has said I should maybe let it go given the type of forum it is but it’s just more ammunition for the uninitiated to use against our hobby.

“This would qualify as spying”

If the drone was under 250gm it’s got nowt to do with the CAA. That’s where the well established privacy laws kick in. They’re clueless (my word of the month)

As wit any sub 250g drone, while it is perfectly legal to fly almost anywhere, flying within the drone code and making sure that your flight is safe. It is common decency, that if you are flying from say your garden, that you get the drone up high as quickly as possible and not loiter over private gardens or property… Flying low over peoples gardens is going to cause problems, especially from a privacy point of view and whether you are intentionally ‘spying’, will make zero difference, should the law get involved… It is only a matter of time as sub 250g drones become more and more popular, that there are going to be those that simply don’t care about rules. All they will hear/read, is they can fly it anywhere they want and that is exactly what they will do. I have flown my little mini 2 over my local area of dozens of occasions, at just below max altitude and have NEVER once had anyone complain, in fact I doubt many have even noticed it… My neighbours al know about my drone, most have either been round to see it or I have mentioned it to them and again, no one negative reaction… I’ve even had several chats with the local police about drones in general and the fact that I own one, a couple of them own a mini 2 themselves and they are often involved with the local police drone team… So al in all a pretty positive experience… I guess it al comes down to where you live, how technically minded locals in the area are and how friendly you are to them…

Keep it high, keep it moving and don’t hover over private gardens or property, plain and simple, but as I say, you are bound to have the small minority that do what they want and when confronted they act like it’s their right to fly their drone wherever and the person complaining doesn’t own the airspace above their garden and while that may be true, it’s not the point, the point is, flying low and slow over a private garden, is an invasion of privacy, no matter what your actual intention may be and the more people do it, the worst a name they will give to the much wider drone community and those, as Sean from Geeksvana said once, “Are the stories that will make the papers”

We assume the person flying the drone knows about all these rules and regulations……I wonder if the person flying the drone is some young teenager/ kid who has been given drone by parents who are oblivious to any rules and regs….or think it doesn’t apply to them/their cherub as “it’s just a kids toy”….in the same way you see kids buzzing around on electric scooters and before then those ‘hoverboards’ on pavements in towns and shopping centres.

Additionally as with some have said, I know that so called ‘social’ media sites are the exact opposite with many ‘keyboard warriors’ venting their anger and shouting down anyone with a different opinion.

After reading this entire thread, I also wonder how the poster on Nextdoor, know the make an model. I mean unless the thing is flying at say 5ft or they were using binoculars I struggle to understand how the poster would know the make unless they just did a random internet search, saw the make and decided to basically ‘troll’ online. As much as part of me thinks the drone was flown by someone who knew exactly what they were doing, I also know there are lot of people out there who post on social media sites, comment on news /sport stories with the main aim of stocking up anger and getting lots of ‘likes’ for their post…….must be related to the whole ‘pitch fork and fire’ lot from years gone by.

Totally agree, I can’t fly mine from my garden as I am in the Gatwick FRZ. I could ask permission and I may at somepoint but I wouldn’t hover near houses or gardens. My back garden also backs on to a park so extra considerations there.

Comes down to a mixture of following the DC/law and common curtesy.

Nextdoor is great if you’re old and lonely or have been banned from/don’t know how to use facebook!