Just a quick one guys the photo I’m posting just for reference the bottom value -3.0 that doesn’t do anything lol it dosent let you change it would that be the fixed aperture ? Just trying to work things out kind regards & thanks in advance. 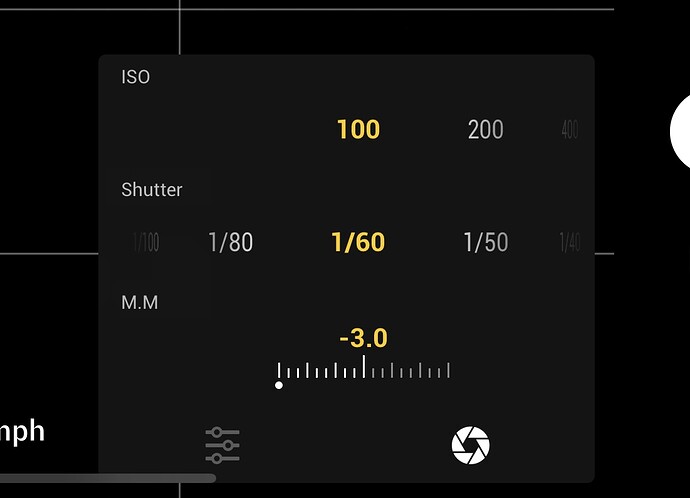 Edit I think I’ve sussed it , when I change the values above it , it changes the values automatically underneath , I have tried to find a thread on YouTube how to use these settings but can’t find anything aimed at that , I’ll do a bit more revision before bed , to see if I can work it out !

I was just watching one of Ian from londons videos,sorry I’ve got it all wrong , ( again ) I need to now watch the 180 rule which I can never remember either , I can honestly say this is defenatly not overnight work job done ! I need to charge all my battery’s I have six get it out in the day instead of keep going out at night although I do like night flying , that said one of the other reasons I’m grilling the net for advice and tururiols , as when I flew the drone tonight I noticed all the lights down below or in view so to speak some of them looked like they was flickering ( not all of them ) so was also trying to wrk out the science behind that , I’m not sure if I’ve played with a setting not realising it even tho I’m usually in auto mode , sorry for the s.a
Much regards rich

I need go to university

The flickering is probably flourescent strip lights running at 50 hertz and you’re probably running your video at 30 FPS meaning the flashes of light from the strip lights are being caught out of synchronisation.
You’ll get the same effect with LED lights, especially LED sidelights on cars.

Ah yes that makes sense I’ve seen this kind of thing wen you even use your phone camera on a tv screen it kind of moves if you know what I mean,
Thanks

Is that the name for it I guess,it’s like one thing can’t keep up with the other,or there moving at differnt paces.

Ah yes that makes sense I’ve seen this kind of thing wen you even use your phone camera on a tv screen it kind of moves if you know what I mean,
Thanks

If you have LED car lights try film them , same effect (happens all time on Top Gear)

That’s it that’s it !!! That’s were I’ve seen it on cars yep that’s the one,when I first see this I thought the canbus on the led in the cars was shot but they all do it

Strobes used to be used in 1970’s disco’s, to stop the action of the dancers. The light only shines at a certain frequency so you see something, light goes off, light comes on the subject has moved to another position and you can see it again. It’s how film works, have a look at a flick cartoon book, same thing.

Yep I get it,you saying about strobes when I used to do raves back late 80’s early 90’s used to make your dancing look better

it was actually like you were adjusted to some mad camera settings,good old days,feeling it now !