My first crash...can it be caused by the cree lights?

Well it had to happen.Thought I’d take her up for a short flight and capture some hyper lapse.
All went well, home point was recorded and while I was hovering at about 5 feet and just adjusting the camera settings, she took off on a spiral with no stick inputs at all, then backwards in an arc, I initiated the emergency shutdown as she wasn’t very high and over grass. She had a low speed impact with a fence post which thankfully did no damage except to break a prop. The gimbal is fine and she flies beautifully. The only difference in my flights were, is was very dark and the crees were flashing brightly to the extent that they were interfering with the picture on screen. I wonder if the forward vision sensor thought the flash was an obstacle and she went into reverse somehow., either way it was certainly worrying.

Sorry for your crash

From what you’ve said here Brian, I would say it’s possible

If I fly in the winter mornings when the sun is really low in the sky it plays havoc with the sensors on the front and it keeps flashing up that an obstacle was detected.

Where do you have the CREEs mounted though? Mine are both on the rear arms, well away from any sensors.

I’ve flown at night with them in, no issues to report. Except it was a bloody nightmare trying to land the drone as they were so effing bright and I was in a pitch black area that they were literally blinding me.

If it was equally as dark where you were, the downward VPS would have nothing to lock on to and as you say, if one of the sensors (perhaps even the downwards ones) caught a bright flash I guess it’s entirely possible.

That said, I’ve never heard of it happening before and I know loads of people that fly with CREEs all time (myself included).

Where were they fitted mate?

Did you change the setting for CSC? As by default you should only be able to shutdown the motors in flight if it has a critical error.

Wonder if the GO4 log file gives an indication of what’s went wrong.

Edit, was this the M2P?
It has a single mag compass and vision compass like the air.
It would be pretty important to have it calibrated with strobes in place.

They were on the front arms, just inward from the front props. I’ve flown before with them but never in pitch dark. I’ve had a look at the flight log which only lasted 57 seconds and there is no stick input at all, it just took off backwards, except where I initiated the landing just before it hit the fence post.

No warnings at all, except for ambient light not enough for vision position sensors. Perfectly normal hover, home point recorded and P-GPS recorded, then it went bananas, just flew in reverse and wouldn’t respond to any control, so shut it down.
The only difference between this flight and others with crees on is it was absolutely pitch dark this time. I recovered the bird and turned off the Crees. After getting my vision back and checking her over, I flew again for several more flights and had no problems whatsoever. It is the MP2 by the way. I did notice that the crees were giving very bright flare on the screen as they flashed, but didn’t have time to land to turn them off, as soon as it recorded the home point…away she went, backwards as if trying to get away from something

Thanks for that. It was a hairy moment. But a valuable lesson learned.

I crashed mine about a month ago. I had to buy a new camera, that really hurt

Fitted to the front arms, just inwards of the props. Facing forwards. I’m going to reposition them on the rear arms. At least they might not affect the side sensors that way. It was a weird moment tho. It just took off backwards as is fleeing from something. I turned off the crees and had a nice few uneventful flights after that.

I don’t mind a crash if I know it was my own fault, that’s something I can analyse and beat myself up over, even if it hurts the wallet. But to not know exactly the cause (tho I strongly suspect the cree lights) is annoying. I was lucky I was near the ground and soft earth, even if a fence post caught a prop. There’s not a mark on the Mavic at all and she flew perfect afterwards, when I turned the cree lights off.

It’s a strange one.

With ambient light being low VPS and obstacle avoidance would have automatically switched off.

You said it moved in a spiral, normally when they move in a circular motion it’s caused by magnetic interference on the compass. Also called toilet bowl effect or TBE.

With the original MP having 2 compass it was quite sensitive in showing interference when placing objects on it.

M2P having a single compass it’s possible you could introduce error without a warning and if it does use a vision compass may be worse in low light.

But again, you said you switched it off and it operated fine. We’re the crees still attached to the drone?

Yes I left the crees still attached, but turned off for the rest of the flights, which all went normal from exactly the same spot. I strongly suspect the crees, in over 100 flights it’s the first time I’ve taken off with them in total pitch darkness. I was taken aback at the amount of ‘flash’ on the screen and was about to land and turn them off when it went into reverse with a curve. I’ll get a screen shot of the flight and post it in a min

That’s worrying and glad you brought it up. I’ve not tried my strobons in complete darkness with M2P

How about uploading flight log to phantom help and posting the link. Gives a lot more data. 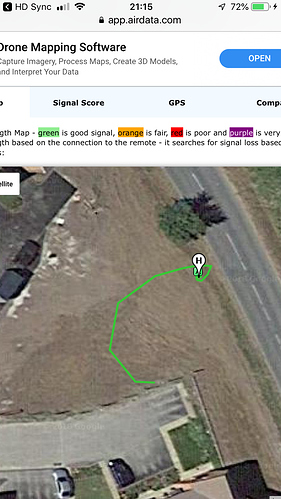 Dropbox is a free service that lets you bring your photos, docs, and videos anywhere and share them easily. Never email yourself a file again!

Here’s a link to airdata.

Just out of curio?, did you start the drone first (not the motors!), wait for full control, then turn the crees on?

I’ll get a look at the data later after work on laptop.

Quickly looking on phone at the raw data and it looks like it was continually rotating according to compass data.

Also if you look at the map track you posted it changes direction at almost set intervals while rotating. I wonder if those intervals would be same as pulse interval on strobes.

It certainly looks like it is doing something in time with the cree flashes. I appreciate your assistance in getting to the bottom of this mystery.

I had the crees already turned on with the drone turned off. I had to get a torch out to see the ‘on off’ switch. Once they were on, I powered the drone up. Let it find home point and hovered it while I set the hyperlapse to record. Just after it recorded the home point in a hover, it went batty.
As if trying to run away from something, backwards!!

Don’t suppose you have a video of it? You mentioned being able to see the flashes in the camera?