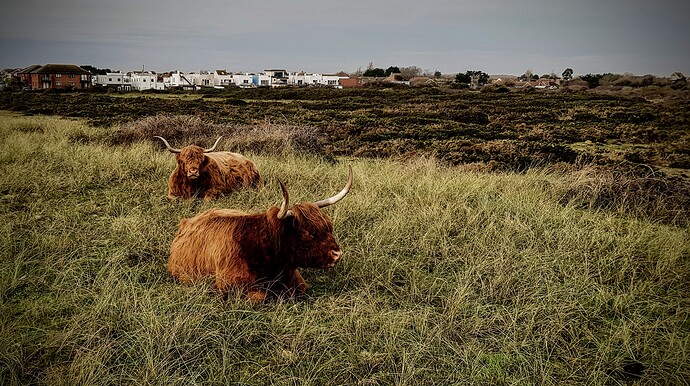 A quick phone snap of two of the four hieland visitors (and one Friesian) at Sandy Point Nature reserve. Very calm, ignore the dog and have already leaned against the fence and forced a top rail off

This reminds me of the day that my control sent me to a report of a cow on the train line. Picture the scene. It was a lovely summer morning, 5 am and nicely light, the birds were singing and everything in the world seemed perfick. Strolling along the railway track, thinking lovely thoughts that maybe I’ll find a nice little freasian or maybe a young calf wandering about. When suddenly the bushes started moving and from them burst 2 of the biggest animals I’ve ever seen. It was like a scene from Jurassic park, faced with these huge beasties, with massive horns waving in front of me. I stood my ground ready for a fast sprint, but not finding me interesting they turned around, their ample rumps sashaying as they walked away from me. I quickly got around them and opened an access gate onto the main road (highways problem now I reported to control). Anyway a police car came around the corner and screeched to a halt, the officers decamped from it and fled to the nearest field for safety. The owner came trotting along soon after,and the 2 cows came trotting up to us, and she introduced me to ‘Harry’ and his Mrs, the biggest highland longhorn I’ve ever seen, and he was like a big baby, as soft as anything and loved having his forehead scratched, which I dutifully did as he waved those huge horns to and fro enjoying the attention. The cops looked on in amazement but declined to come any closer than the safety of their car. We put them back into their field from where someone had left the gate open (possibly malicious). I’ll never forget that day.

When I was a police marksmen, I was called out to deal with a bull that had escaped from the local abattoir and disappeared into the local park. It was a large area with lots of woods. I was walking round, with my rifle over my shoulder, when two workmen asked me what was going on. I told them we were having a clamp down on expired road fund licences and I was the enforcer. I think they believed me, but only for 0.5 of a second. The bull must have got wind of me (excuse the pun) and made it’s way back on it’s own.

Here’s two pics of “Billy the Bull” who lives in the field next to our house. 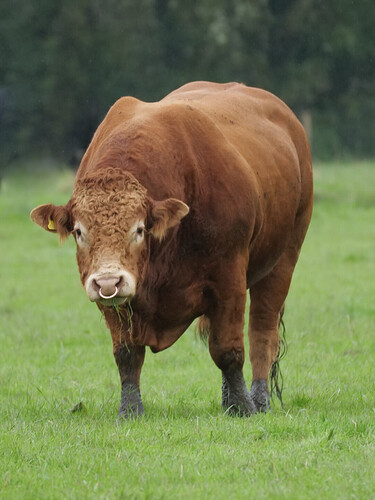 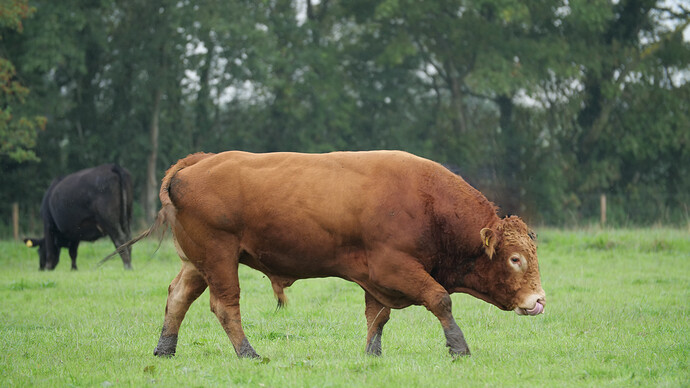 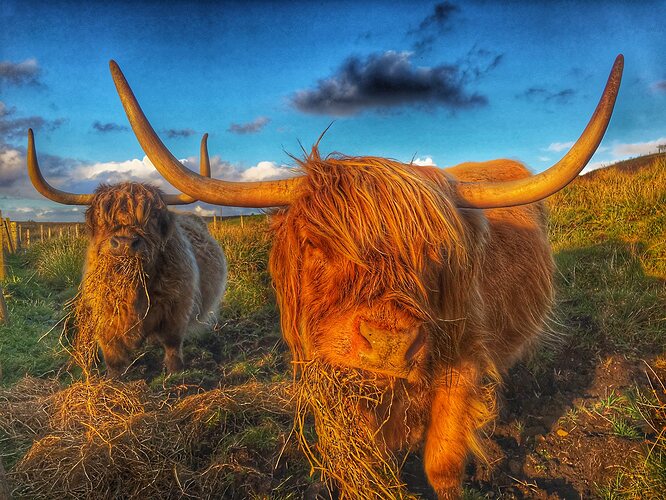 I’m forever greatful to the police marksmen. I attended a horse that had been hit by a train, it’s injuries were horrendous, yet it was still alive and tho suffering immensely tried to follow me and kept nuzzling me. The look in its eyes seemed to be pleading for help. I called our control but they said they’d have to get a vet to put it to sleep, the problem was that the vet would only attend if he received a purchase order, and it being a Sunday, control couldn’t find anyone with the required permissions to raise an order. Time dragged on and the animal was in great distress having most of its flank torn open and its insides exposed, with great chunks of its muscles ripped and hanging down. Yet it still tried to drag itself towards me if I walked away. The owner turned up (a traveller) and wanted to put it in the back of a filthy transit van and take it away. He wouldn’t say what he was going to do with it, but I could guess that it was going to have a slow painful death, bleeding out and in great pain. But I stood my ground,even when he threatened me. My control weren’t happy, they said I couldn’t stop him from moving his animal, and would report me to my manager, so I called the police and asked for an ‘authorised shot’ to attend. Thankfully they backed me up when they saw the animals distress and arranged to put it out of its misery very quickly. The incident was quickly glossed over by those in power.

That must have been horrendous for you Brian. To see an animal suffering like that and then having to argue over a bloody invoice !. I went to an accident in the early hours when a car hit a cow, on a country road. The car “scooped” the cow up onto the bonnet and it went through the windscreen into the car itself. The occupants were seriously injured (as well as being covering the contents of the cows stomachs). It was obviously severely injured so we just requested the vet to attend and worried about who was going to pay later.

Among the animal kingdom, cows seem to have particularly evil smelling stomach contents. You never forget the smell. To be fair to the veterinary profession, I was on duty on Xmas eve when a train hit a cow, the vet attended and found it wasn’t too badly injured except for a broken back so would never walk, it was happily sat chewing its cud but paralysed. The vet said he’d have to euthanise the poor animal. Our control refused him to do this until they’d located the farmer and got permission from him, but didn’t know who he was. I passed the information to the vet while on the phone to control.
By this time it was getting a bit late and the vet was concerned about getting back through Xmas eve traffic for his festivities.
He walked towards the cow and I heard the soft thud of his ‘humane killer’
He strolled back and told me the cow was dead.
Control heard the noise and demanded to know what happened.
I told them the cow had just died.
‘How?’ They asked.
‘Lead poisoning’ I laconically told them, and left it to them to locate the farmer and give him the news.

A bit ironic you mention “cause of death, lead poisoning”. I was called out at night to another abattoir. The bull had run out onto a grass area alongside the building. The problem was there was a housing estate surrounding it. Not an ideal backstop for a rifled slug. I couldn’t get high enough for a downward shot so decided the best option was to down it with a shot to it’s shoulder. I hit it and it went down …and then got up again. To cut a long story short, I eventually got it to lie down and a butcher ran out and did the necessary (he in fact cut it’s throat so they could use the meat. When I applied for the rifled rounds to be replaced, I was met with, “What The F**k Did It Die Of Lead Poisoning !!!
We seem to have taken over this post but here’s another one.
I was local rep for the Honda Goldwing Club many years ago and at one of our meals out with visiting bikers, I went on my own as my wife was working. I told the 20+ attending that she would be coming along shortly. Someone asked where she worked and I said, “The local abattoir”. (She in fact worked in a library at a local college. They said, “What, In The Office?” I said “No, She Stuns Bulls”. There was a silence and looks of surprise on everyone’s faces. I told them she sat on a wall and a bull/cow was led in, pushed up against the wall with a metal gate and she shot it in the head”. There was again more silence. (I must admit I was very convincing) When she arrived, someone asked if she was happy doing her job and she “Of Course, Why Not”. Soon the penny dropped and she asked “What’s he been telling You!!!”

We seem to have taken over this post but here’s another one.

Not a problem. Carry on

Reminds me of a pub acquaintance who worked trackside for Network Rail. His gang came across a small decapitated deer that had investigated a moving locomotive a bit too closely. They managed to get the carcass back to the depot and into his van.

He took it upstairs to the bathroom to gralloch it and hang it to drain the blood into the bath.

It seems you’re not the only one. I used to live at a motorway police house and we were always getting people calling in, thinking it was a police station. One day a large Range Rover pulled and said his friend had broken down on the motorway and could I help. I found a large length of rope in the garage and gave it to him. He asked how much I wanted for it and I told him nothing. He went to the back of the Range Rover, opened up the rear and from behind the two labradors and gun rack he pulled out the biggest hare I’d ever seen. He thank me profusely and thrust the animal into my hands and off he went. I really didn’t know what to do with it but had read you had to hang it, so I did, in the garage. Wife came home and night, parked car in garage, opened door and walked straight into it. It disappeared over the hedge shortly after !! I’ve just realised after posing these incidents, my wife has had a colourful life married to me !!

It’s certainly a colourful life and good that we can find humour among some of the most devastating scenes that the general public would have nightmares over. Kids seem to be hardier than we give them credit for…I was called to a ‘one under’ and it was a right mess, not helped that it was about 4pm and little darlings were just out of school.
Word seemed to spread faster than you can say ‘Facebook’ among the children who all turned up like little urchins with a cry of ‘cor wot a mess mista’, and ‘is that ‘is ed (head) mista’
The police arrived and were quiet rightly concerned to shield the little urchins from such a sight, but the little darlings were more resilient than given credit for, and were having non of it. Every vantage point was utilised, walls, trees, lamp posts. When the blue chequered tape started sealing the station off and everyone cleared, one intrepid youngster charged his mates a quid each and took his mates back to his house, his back bedroom overlooked the scene. Some younger members of the constabulary arrived and started to ‘dry heave’ at the sight. Our intrepid audience of urchins were obviously made of sterner stuff and would have something to talk about at school next day. It was left to me and a grisled old police sergeant to clear the mess and bag everything for the undertaker. Later on the ‘victims’ gorgeous girlfriend arrived just as I was leaving, I gave her my condolences but she said ‘thank god he’s dead, every time she threatened to leave him, he said he’d kill himself, but now he’s actually gone and done it and glad he did’. Funny old world.

My late friend Marc was a driver for London Underground. His “one under” mistimed it and landed momentarily on the coupling, giving Marc an excellent view of the suicides anguished face before he fell onto the tracks and out of sight under the train

The person that took charge of the situation eventually spoke to Marc and established that there was no fault in Marc’s driving. Sympathetically he suggested that Marc should go and get himself a cup of tea and “no need to go back on duty, take a break until your next shift tomorrow”.