Scary morning indeed. I took of my MA2 this morning for a nice flight. “Nice weather” a little bit of wind, but not too bad.

Saw a nice boat on the distance and tried to get close to it. Didn’t realise that the drone does have a 2.5km radius limit, so even if you have good view and reception, still limits the range (you live and learn).

Anyway, on the way back realised that the wind was a little stronger than initially though and stared to panic that might not make it. So coming back the drone reminded me of the automatic return home and I cancelled. Then when there was 8 or 9 % battery it tells me that it’s going to land even though I am still over water. So I can see how is loosing altitude but funny enough, you can still control the direction.

Slowly kept going down and still making way until finally we get to a beach and managed to land safely with 3% battery!!!

Run down from the cliffs I took off and found it safe and sound. The tide was also going out, so it played on my behalf.

Now reunited with my drone just went to the coverdrone website and got the drone insured.

Next time you are battling a wind come down lower. The wind at height can be twice the speed of the wind at 10 metres or lower: 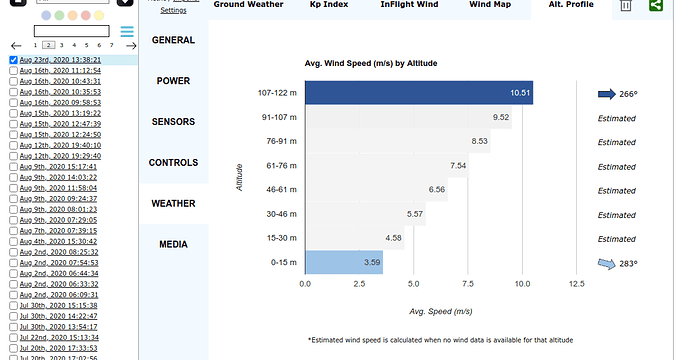 Also I think your OrtoKorwrecked has changed underwear for you …

Didn’t realise that the drone does have a 2.5km radius limit

Which drone was this?

Which drone was this?

Didn’t realise that the drone does have a 2.5km radius limit,

Have you set that yourself ?

Chris got there first. You can adjust the max distance in the safety tab along with max height although I’d say in this instance it did you a favour as if you had gone further away you probably wouldn’t have got home by the sounds of things

Yes, @macspite , it was supposed to be underwear.

But with regards wind resistance, even though it will be less windy, I also think that part of my luck is the altitude I had. The drone did start slowly to lower the altitude, but if instead of 90m i would of been flying at 10, once it started to lower itself it would of gone down pretty quickly I guess?

@PingSpike, @OzoneVibe @milkmanchris and @SirGunner it’s a Mavic Air 2 using DJI Flyapp. Also, I must of set the max distance when I first set it up.
My old MA1 never got it further than a KM, so never though it would need a lot more. I do think it did save me on this occasion, so might leave it on.

I might go and ply the lottery, if I am this lucky with the drone, it might also help with some extra cash.

Too true. I think after 150m I struggle to see it. Never mind over a kilometre.

it was supposed to be underwear.

Thank you so much @milkmanchris

Sure, I can can see my Inspire at over 2 miles away, probably more with the strobes turned on

Just a thought, would coverdrone pay out on the insurance if a drone was lost flying out with vlos?

I doubt any insurance provider would honour a claim that didn’t fall within the confines of the Drone Code.

Glad to see it ended well. At least you won’t forget the experience. Personally I plan the return leg with around 60% battery left, that way I can deal with any eventuality.
Wind tends to be stronger over water, no obstructions to break it up so you get the full strength.

Indeed, nothing at all to stop it.

Just a thought, would coverdrone pay out on the insurance if a drone was lost flying out with vlos?

They would ask for flight logs.

the drone reminded me of the automatic return home and I cancelled.

I doubt any insurance provider would honour a claim that didn’t fall within the confines of the Drone Code .

Case in point, one of our members had a claim denied for a crash in his own back garden if I recall.