Two charges of all four batteries, so 8 in total. I don’t charge it very often at all.

And yes, was pretty sure I’ve used it whilst on a battery power bank before, but just tested it to be sure and it’s working fine.

Ah - misread - even when I quoted it.

Two charges of all four batteries, so 8 in total.

I think I’m about 6/7 Mavic 2 Pro batteries to one SC charge, though I have thought recently it’s not been lasting as long as it used to do.

Many thanks from the reviews I had seen there was nothing specific about the unit and its life. I was just a comment that you can see the level drop. From the feedback I have now had for you and others its more like I expected as opposed to the standard controller which you could just forget and when you had nothing else to do give it a charge

Happy flying and thanks again

I have the original SmartController which came with my Mavic 2 Enterprise and it’s a nice controller. I never could get it to link to my Mini 2 tho.

I’ve also got a Tripltek tablet which I use with the Mini 2. Fewer ££££ than a SmartController and can use with any drone which works with Android. The screen on my Tripltek is better than the one on my SmartController, and is bigger. It’s also a really useful tablet, I have a phone SIM in it and it doubles up as my personal phone (mostly I use my business phone). Was out with Big Monster Drone and a Micasense Rededge last week in the wilds of the Yorkshire Wolds and the Tripltek was extremely useful as a navigation aid, the excellent GPS receiver and fast refresh on it is useful for more that just drones!

Life of SmartController: I have 7 batteries on my M2E, plus on a sunny day the batteries will charge from the 250W solar on the roof of the work van… so I use a big meaty powerbank (of the sort that you can recharge an ipad from) plugged into the SmartController as otherwise I run out of Controller power before drone batteries. Probably get about 2 hours flying with the SmartContoller unless extra powerbank is hooked up. (I usually get 22 to 25 min from each drone battery).

Although I really like the SmartController integrated experience, equally the bigger screen of the Tripltek is also a really good thing for me.

Get a Tripltek tablet. Brighter than the Smart Controller and can be used with pretty much any drone unlike the the Smart Controllers, indluding the new one for the Mini3. Im running Go, Go4, Fly, Litchi, Pix4D,Pilot all without any problems. And, its a bloody good tablet that will take a sim as well. Im fed up with DJI non compatability between controllers.

And there’s a long thread with lots of info on that here : Tripltek Tablet - Feedback from owners and general discussion

Welcome to the world of dilemmas. Spent much money on trying to get the machine and controller right for what you want it to do… Only you will find what you need. Go brightest screen, portable, no cables, adaptability fantastic (tripletek, I don’t have one) MM3 new controller

. Old SC is a dinosaur, there on sale EOL. New one too expensive, go tripletek, but it’s an unbalanced heavy lump though highly versatile and may be future proof? New rumour is the new MM3 controller will soon be available with M3 as Combo… Who knows. Welcome to dilemma world​:roll_eyes:

Thanks. Which one? Is the K any good?

The one I have is the 8in one. Ref T82. Got mine direct from Tripltek but its now available on Amazon at £749.

Ouch!
I get what you’re saying but already got two tablets which I need for specific stuff so a bit too much for me.
Thanks anyway.

But you were thinking of the Smart Controller … 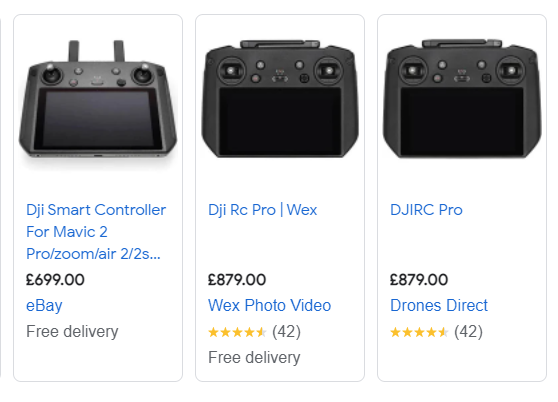 Even eBay you’re looking at something in the £500+ range.

True.
I was hoping to get a M2 Zoom with one for under £1k.
Willing to wait and see if prices drop with M3 and Mini 3 now out.