So you want a micro?

Getting started with fpv can be challenging. There are a vast amount of things to learn from how the tech works to maintenance and that’s before you even get in the air for the first time.

Now truth be told I’m not the biggest micro fan. I keep trying them but keep not finding them as fun as my larger more powerful quads. I will as always try and recommend good quality without bias towards a specific brand.

So if you already have a transmitter, goggles charger etc (some recommendations are in my fpv101 thread) your choices are pretty endless

If however you are starting from scratch then one of the rtf bundles will get you started.

There are 2 types of micro fpv quad

Brushed
Brushed motors are where tinywhoop’s really came from. They are cheep and reliable. They are also the lightest of the micro quads. On the flip side they also wear out and need replacing when the brushes wear out. I also find them horrendously underpowered (some day that’s the charm of tinywhoops)

Brushless
Brushless motors are where everyone is moving to now. They are more expensive than brushed motors but they also don’t ‘wear out’. They also generate more thrust than brushed. Downsides include power consumption (they are hungry motors). They are heavy on comparison to brushed.

All in all I would be looking at brushless if buying today.

Size is important. Micro quads vary from about 65mm wheelbase to around 110mm. The larger the quad the harder it is to fly indoors as bigger quads have more powerful motors and bigger props. So you need to think about where you want to fly it.

All the “whoop” class quads use ducted props. The idea being that the ducts help produce more thrust on each motor increasing efficiency. In practice however most quads it’s more a thing to prevent you from damaging things you will bump into. The ducts also act a bit like sales in the wind. All whoop class quads have ducts. It does mean that you can fly around your house and not worry to much about scratching the wallpaper or damaging that expensive tv!

Batteries…
Most whoop class quads run on 1 or 2s batteries. Looking after them is at best a pain in the… I recommend treating them like consumables and replace often.

Nearly all of the rtf packages come with horrific controllers and your going to have a bad time trying to fly them. The notable exception being the eMax tinyhawk series. They come with a basic but useable controller (you will however outgrow this pretty quickly). The rtf bundles all come with some Google’s. Again they are functional but not brilliant. They will be fine for getting started but if you want to improve then goggles will end up on your shopping list pretty quickly.

Bnf
Bind n fly is where most people go. That way they can use there own controller and goggles. Worth noting that the latest frsky transmitters do not support “d8” mode and should be avoided (grab a jumper t16pro instead) the biggest advantage is your controller will grow with you and you will be able to use it on many many models.

So my top pick for a getting started micro quad…

The eMax tinyhawk either as the rtf bundle or as a bind n fly.

Remember to stock up on extra batteries and happy flying

Any questions let me know and I will try and help

If you want me to cover this in greater detail I will be talking micros on my next live stream.

Especially in the current situation where trying to enjoy yourself with larger models will no doubt incur the wrath of those yet to see the light, micro’s have a very useful role to play.

These are some of my “off the shelf” micros and my thoughts. 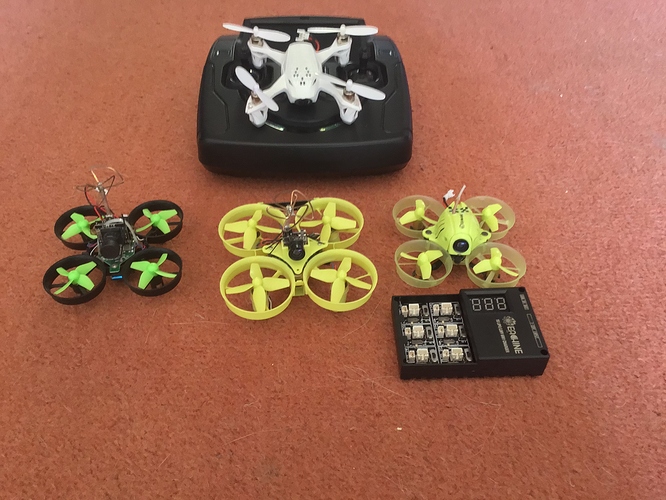 At the top of the picture is the Hubsan x4 FPV. The original X4 is probably equally responsible as the original DJI Phantom 1 for introducing the masses to multirotors. This particular version was equipped with a Fatshark compatible video transmitter. It was sold either on its own, with a basic transmitter, or a more advanced transmitter with a built in video receiver, screen, and DVR. Flight wise auto-levelling is always on but with the option to do flips by pressing a suitable button on the controller.

On the left is the EACHINE E010. This is probably the cheapest on the market at under £10 with a tiny controller (not pictured). I fly mine with my Taranis and multiprotocol module. As standard it doesn’t have any FPV capability but is easily modified to take a little AIO camera/VTX as pictured. Very easy to fly being auto levelling but flight times are short with the added weight of the AIO.

In the centre is the Eachine QX70. A bind and fly (BNF) that came with an option of different SPI receivers, FrSky, DSM2, or FlySky. It also has a real F3 flight controller and so can be tuned and customised in Cleanflight and Betaflight. Can be flown in full ACRO but due to its weight flips and rolls are not the tidiest.

At the right is the EACHINE QX65. This is a great little package, AIO camera, F3 flight controller, quality motors. It’s supplied with a six port LiPo charger and two extra spare frames and extra hardware. Receiver wise it is supplied the options of FrSky, FlySky, and DSM2/DSMX. A great fun flyer able to pull off tight flips and rolls. I’ve modified mine with a PH2 connector with solid pins to improve battery performance. 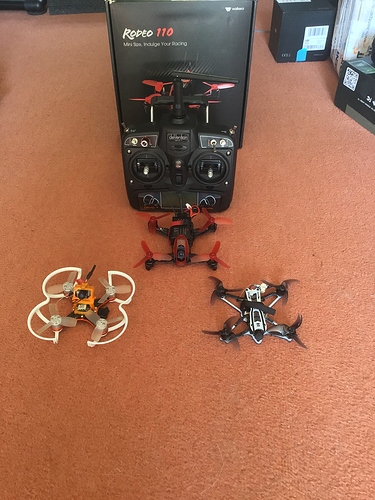 At the top is the Walkera Rodeo 110. Supplied in a Ready To Fly (RTF) package with a quality full-size controller, the Devention 7, mains powered battery charger, One 2s 850mAh LiPo, spare props, USB cables, and a CD with manual and software. This little quad is a reaL little beast, carbon fibre frame, and capable of some crazy speeds and manoeuvres. and not really suited to indoor flying. It features a F3 flight controller with integrated blackbox, a 40 channel video transmitter with selectable power from 25mW to 600mW. The supplied camera is quite disappointing having low dynamic range and soft focus. This can easily be fixed by replacing it with a cheap 1000TVL micro sized security camera. Prices for the complete package can vary wildly with some sellers asking close to £400. However it can be obtained quite cheaply new, I paid £95 including postage from an eBay dealer in the UK.

To the left is the Emax Babyhawk. This is supplied without a receiver or battery but does come with spare props and extra screws. The plastic build is quite tough but is prone to cracking after multiple crashes. I have replaced the body on mine with a CNC aluminium and carbon fibre frame from Rakonheli. Feature wise it has a full featured F3 flight controller and a 40ch AIO with selectable power between 25mW and 200mW. A great little stable flyer and even though it runs on 2s LiPo’s it’s still something I feel comfortable flying indoors. The prop guards are removable which I do when outside to reduce weight and increase performance.

On the right is my most recent acquisition, the Emax Tinyhawk Freestyle. As far as I know this is only available with a FrSky D8 SPI receiver but there is the option to add a third party receiver. Some may wish to do this as the supplied receiver is not the most sensitive and will probably failsafe beyond 100m. It uses a F4 Matek flight controller and straight out of the box the tune is very close to being perfect. As supplied the VTX is locked to 25mW and many channels are also blocked, however this is easy to defeat and the instructions to do this are in the supplied manual. Construction is 2mm carbon fibre with a white laminate covering. The camera is not the greatest but more than usable, though if the need arises it’s very easy to upgrade to a higher spec’d micro race camera. This one also boasts a full featured Betaflight OSD and uses smart audio so many settings can be changed via the controller negating the need to plug into a controller and make changes on the fl6 out in the field. Flight wise it doesn’t disappoint and you have the option of flying on 1S or 2S. It comes supplied in a nice little case with a full set of extra props, screws, XT30 plug, and two 450mAh 1S LiPo’s.