Swellpro drone unable to take off

Hi there, just invested in a Swellpro drone, having a little trouble with it, it won’t take off lifts its back end up but the front end seem to won’t to stay there then it flips over. Damaging the propellers. Did manage to get into the air once, but it came down for no reason and damaged the glass. Can anyone advise me to what I am doing wrong. I have been flying drones for 12 months and had no real problems and I do have my Pfco in place. Anyone got anyone suggestions to what could be wrong?

Hi… Are the props correctly positioned/located? The kind of behaviour you’ve mentioned sounds like it could be that.

Hi there Ned, yes I think so, they tell you to put the propellers marked with a r on clockwise and they give you a diagram. I may just change them round to see what happens. But I don’t won’t to damage the drone any more, do you know anyone that repairs drones, it would come in handy for future reference.

Sorry mate, I don’t have any recommendations re. Drone repairs, but I’m sure someone will chip in with suggestions.

Thanks mate, never had a drone like this before, been flying the Mavic 2 for sometime now and it handles very well, thought I would go over to the swellpro because they are waterproof and I do a lot of photography seascape’s. But I-will persevere with it as I like the look of these.

I would agree with that idea it sounds right,i too have seen this happen with the wrong props on motors…
definitely worth checking,could you have a set of incorrectly marked props?

Thanks Firefox, I think I might just change them around to see what the out come is.

Please let us know how you get on,and i hope the drone is ok! i like the look of these swellpro drones,and have been looking at the swellpo spry,for wet weather flying…

Is the drone new or did you acquire it used?

The Swellpro drones used to usea rebranded Flyshark flight controller, which is actually quite good (I have one), and similar to the Naza V2. The config for this FC will only allow the motors to spin in a certain direction, for a basic quad it looks like this: 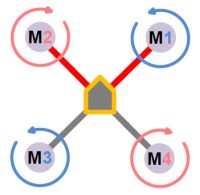 The props need to be mounted so that the leading edge is slanted upward in the direction of rotation. If the prop is mounted on the wrong motor it will provide negative thrust. As the speed of the prop increases and causes the craft to tilt the flight controller will try to compensate by increasing the speed of the motor, causing the craft to tilt further, and the flight controller to compensate even more, making the motor spin faster and… you can see where this is going… until the craft flips. This all happens in milliseconds and that’s why the flip is so violent.

The reason I asked at the beginning if it was new is that I’ve had a few quads on my bench where the previous owner had replaced a motor and/or an ESC but had incorrectly wired them together forcing the motor to spin in the opposite direction which would produce the same effect as if the wrong prop had been mounted to it.

Hi there Nidge, that’s exactly what as happened are you local to me mate. This is a brand new drone so no third party as had anything to do with it mate. It tells you to put the propellers marked R on the clockwise motor and the ones not marked on the other. And as you say it was very violent.

Hi there Rafter, will check that mate, but, the drone is brand new so it should be correct. Thanks mate. Just want to get it right, even if I have to pay someone. As soon as they are right it should be easier to change the props.

Hi there, I can see how they are mounted but what ever position I put them it still will not lift. Very frustrating. Can anyone help me solve this problem. Please?

Also - pinging @JamesB - who also has the Swellpro.

I had same issue of drone tipping forward when trying to take off .
I had the props at front of machine on the wrong MOTORS.
Destroying the drone as it knocked out the circuit board it would start up and stop all day but recieved NO command to take off
Typhoon X16 scrap.

Hi there, can anyone recommend someone who repairs and service’s drones, as I would like to have the drone checked out and the prop’s Put on properly. Don’t have this trouble with the Mavic 2 Pro.

Cannot understand why you are not talking to the Original Supplier, surely if you have done everything to the instruction manual, then there is a fault with it.
I would send the bloody thing back !.
I certainly would not be looking to get anyone but the manufacturer to look at it, or repair it, as you will invalidate any warranty with it.

Hi there, yes I am trying to contact the supplier, and have sent them some emails and photo’s. The drone come’s from SHENZHEN China. I am trying to see if they have any dealers in this country that can help. They have contacted me via email on there help line.

Have you had the opportunity to connect it to the Swellpro Assistant software? This should allow you to see if there are any issues in the drone and if your transmitter is in the right mode. I’m presuming you are flying mode 2 as you say you also fly a Mavic. Going by your original description of your problem it’s possible your transmitter might be configured in mode 1. In this mode the pitch control is on the left stick and pushing this up, thinking it’s the throttle will cause the drone to nose over.

If you connect it to the Assistant software ensure you take your props off first.

Thanks Nidge, I will try that assistant software, just having trouble downloading swellpro software, not unzipping properly. Just going out with the Mavic for an hour.