Here’s my attempt at a short video, not the quality of the original from the mavic of course and have to say the time it took farting about to get it into the editor makes me think I’ll probably stick to still photography until I can afford a PC Capable of dealing with the original footage
Thanks Ozone and Callum for the advice to get me this far, in the end I managed to edit the original footage in Movie Studio Handbrake rendered it a mess and took 5 hours (no doubt user error)

Talgarth-2 from Larry Underwood on Vimeo.

Nice and slow
Good with the music too

Give the conversion another try in Avidemux - it won’t take anywhere near that long! it’s far less easy to get a parameter wrong.

Also - for future video, if you set it to record in H264 you won’t have to faff with conversion anyway.

Also - if you just copy/paste the Vimeo link into its own line on here, you get an embedded player …

Great video and what an interesting location.

Thanks for the advice and encouragement.

what was the site originally?

I was thinking exactly the same thing, it looks fascinating.

The Mid Wales Hospital (Welsh: Ysbyty Canolbarth Cymru) was a psychiatric hospital in Talgarth, Wales. The building, designed by Messrs Giles, Gough and Trollope of London followed the compact arrow plan and was built at a cost of £126,000. Originally named the Brecon and Radnor Joint Counties Lunatic Asylum, it was opened amid public ceremony on 18 March 1903, by the Rt. Hon. Lord Glanusk who said of it "everything has been done that human ingenuity could devise for the happiness and safety of... 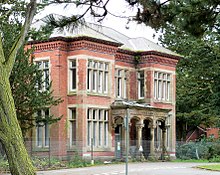 Whittingham Hospital was a psychiatric hospital in the parish of Whittingham, near Preston, Lancashire, England. The hospital opened in 1873 as the Fourth Lancashire County Asylum and grew to be the largest mental hospital in Britain, and pioneered the use of electroencephalograms (EEGs). It closed in 1995. In 1866 the first three Lancashire lunatic asylums, at Prestwich, Rainhill and Lancaster, were deemed to be full. Extra accommodation was urgently needed and to this end the building of Whit...

Nice one, thanks. My guess would have been prison.

A couple of aerial snaps would liven up the Wikipedia page

Very cinematic, I like that, it might have taken some time to edit but it was worth it

Great video, especially for your first try!
Bring on the next one…
Melvyn