Update on changes to UK Regulations

Just arrived home from hols to find BMFA magazine with a small news piece titled Update on changes to UK Regulations See below.

As I read it , and it’s not by any way a legal confirmation, if you are a member of BMFA or FPVUK then its is possible that there will be an exemption on the 400 ft limit to come in on 30th July 2018 for small unmanned aircraft of less than 7kg. I have checked FPVUK site and no mention there and they have removed their news section.

Anyone else have more info on this? 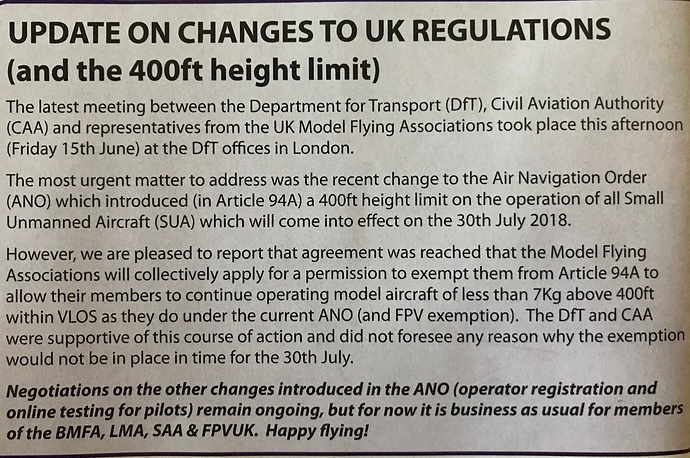 Hi i done a course with the police just before this came in and it was talked about quiet a bit at the time there was no mention of any exemptions but planes and other flying models all fall under this new rule of 400ft and as far as anything reads its all interpenetrated by the reader good law there. The 400ft rule if you take off from the beach you can go upto 400ft if you take off the top of a cliff you can go 400ft but from the beach take off point that would be say 600ft if you flew over it but thats ok. I think from what was said Drones are 400ft and all the other rules 50mts 150mtrs and so on. I have a mavic pro and feel the 50mtr min height is to high this should be 25mtr really for safety as a little dot in the sky at 50mtr is that really safe?? I dont think the max height 400ft is a major problem to most Drone flyers but the 50mtr min could be. I will be scouring the net later for any info on this

Ok spoke to the BMFA this is not law yet and is still in negotiation there is a possibility that Drones could be excluded from this due to them being able to fly them selves automatically to get out of a problem or return to home-points and way-points. So this legislation would be for powered aircraft gliders and helicopters um helicopter drone oh yes drone can fly its self. I did bring up the 50mtr height in the conversation saying 25mtr would cover that and he said 50mtr is basicly for privacy laws so if there is even 1 person around its got to be 50mtr up and a dot in the sky. I think the trees where i normally fly are 20mtr high and look massive but there is deferentially a bit of space between the drone and trees when flying over them

There is an exemption all ready in place for FPV flying.

It basically allows you to fly without having LOS as long as you have a competent observer.

Your also allowed to fly no higher than 1000ft.

With the new regulations coming in I’m guessing this exemption will need to be looked at and reissued if still appropriate.

With the new regulations coming in I’m guessing this exemption will need to be looked at and reissued if still appropriate.

I think that is what the article is suggesting so as to not take away the existing rights. What is interesting, and maybe just the way the article is written, is that is states, “ to allow their members”…

I see what you mean. I thought the 1000ft rule was for FPV but it suggests it as for all VLOS flights with a membership.

To be honest It might just a badly written article as have read the full CAA exemption a few times and makes no mention of that.

Here’s the update from FPV site.

UPDATE ON CHANGES TO UK REGULATIONS (AND THE 400FT HEIGHT LIMIT)

The latest meeting between the Department for Transport (DfT), Civil Aviation Authority (CAA) and representatives from the UK Model Flying Associations took place this afternoon (Friday 15th June) at the DfT offices in London.

The most urgent matter to address was the recent change to the Air Navigation Order (ANO) which introduced (in Article 94A) a 400ft height limit on the operation of all Small Unmanned Aircraft (SUA) which will come into effect on the 30th July 2018.

We are pleased to report that agreement was reached that the Model Flying Associations will collectively apply for an exemption from Article 94A to allow their members to continue operating aircraft of less than 7Kg above 400ft within VLOS as they do under the current ANO. The DfT and CAA were supportive of this course of action and did not foresee any reason why the exemption would not be in place in time for the 30th July.

Negotiations on the other changes introduced in the ANO (operator registration and online testing for pilots) remain ongoing, but for now it is business as usual for members of the BMFA, LMA, SAA & FPVUK. Happy flying!

Well, we won’t have long to wait to find out for sure…

They way I understand it is this, the 400ft is an all encompassing limit for all “model aircraft” irrespective of type which are flown LOS.
In place and for a number of years now there has been an exemption for FPV flights.
The exemption was put in place by the CAA after FPVUK members lobbied their local MP’s against a proposed ban by the CAA.
The matter was raised in parliament, and after a lot of work by FPVUK chairman Simon Dale and exceptional engagement by the CAA, the CAA allowed FPV flights only if you were a member of FPVUK.

The BMFA were quite hostile to FPV flying at that time but shut up when FPVUK was granted to be the only body under which you could be insured and legally fly FPV. The conditions were that you had to have a “competent observer” and fly no higher than 400ft.

The CAA by appointing FPVUK were able to put the “eggs in one basket” so to speak and after a couple of years they were able to have the necessary data as to how safe FPV was; and by this time the BMFA had time to rethink its position regarding FPV and my guess is they thought if you can’t beat them join them.

It followed that there was only one incident during that trail period that led to prosecution; we all thought that after that incident the FPV community had had it, but to our surprise the CAA raised the altitude limit to 1000ft, I think it was the following year.

If you use goggles altitude limit is 1000ft with a competent observer, the pilot and observer remain bound by the LOS rule to maintain unaided visual contact with the aircraft at all times.
At the end of this month any model aircraft “irrespective of type” weighing more than 250g and flown “line of sight” must be flow at or below 400ft.

I believe that it makes sense that the various model flying associations will be lobbying for exemption for their members regarding club activities such as the highest altitude reached by competitors in gliding activities etc.

I believe that the CAA has an eye out for a legal framework for UAV flight altitude corridors to accommodate for military and commercial interests that will operate at “beyond visual sight” That framework does require the registration of all “UAV” weighing more than 250g.
I think that the next generation of DJI “UAV” may end up with a transponder that can be “pinged” by let say an airport perimeter scanner, the scanners are already being tested. The scanner will be able to identify the owner and also tap into the video and telemetry.
I don’t know how registering will work, my question is, is it just for “multicopters” or any type of model aircraft? or will it be if the “model aircraft has a camera”? I have deliberately avoided using the “Drone” word.

Sorry, I’ve gone on a bit eh! Please correct me where I’ve my facts wrong.

I believe the USA have a similar rule with registration for aircraft over 250gram.

That’s what brought about the trend of micro FPV quads.

Does this document help ?

Does this document help ?

Thanks for the link, having read it this part is unclear to me.

(2) ) The remote pilot of the small unmanned aircraft must not fly it unless the CAA has issued the remote pilot with an acknowledgement of competency which is valid for that flight at the time of the flight.

Does this mean for each and every time you wish to fly as a competent remote pilot?

@Nazzcar thanks for providing this link. Not had a chance to read through properly yet, But a quick glance shows that they have tried to give clarity to some issues such as the 400ft above ground with the graphic. Taking @Njoro 's point, clearly a need to read and understand the detail!

Also It looks like the 1000ft for FPV will be revoked too at some point.