Why are some folks so obtuse?

An American friend shared a vid of him and a mate doing a sunset shoot in one of their National Parks. There were quite a few folks there and then this chap turns up with a huge (his words as I couldn’t see) drone and takes off all within 20ft or so of the nearest people.

So the discussion has another UK friend (not mine) jump in and say folks do this in the UK all the time over NT land and it isn’t permitted so I decided this needed to be corrected. I have politely (for me) pointed out numerous times that it doesn’t matter whom says it it is or isn’t permitted when they don’t own the airspace… sadly he just keeps to the mantra “the NT say it isn’t permitted to fly from or over”.

My end of tether for this fool has been reached and I’m feeling better just venting here. But is it any surprise that some folks face opposition to fly when there are seemingly intelligent idiots out there that just don’t want to admit they got it wrong? Is this the power of t’internet in that the attitude “I’m right, you’re wrong irrespective”…

Even gaffer tape can’t fix stupid.
I know your frustration.

But it can shut them up

Well yes, but I was trying to be rational and calm about it and see if I could get my point over. Thankfully he started with the bad language and went home.

To be fair (well, I don’t need to be fair, but anyway) a lot of this kind of idiocy is because the “official guidance” is just not very good. Without clear, official guidance, all you can go on is opinion.

The National Trust issue is just one example of the many (and often deliberate) misunderstandings propagated by Network Rail, councils, Natural England and their ilk.

Legally as long as you are above 50m any land/property/building you can fly over NT. EH. CaRT. etc land. You also have to take into consideration the number of visitors there are on that land as to whether it is congested or not. Also the take off point should be 50m away from that property.

If only it were that simple!

a. wooly
b. not likely if the droner is following the code.

One such phrase is:

Drones should not flown near property; the special nature of our properties makes the risk of damage more severe.

This one is my fave trhough:

Many drones have cameras attached and these could infringe data protection laws (filming people without permission) and potentially could contravene National Trust rules on photography and filming.

I have taken my DSLR and video cameras into NT locations and never once told I can’t film, photograph or otherwise be careful not to contravene their rules or the DPA. This statement alone just makes the whole document laughable IMO. You can find that here if interested.

The National Trust issue is just one example of the many (and often deliberate) misunderstandings propagated by Network Rail, councils, Natural England and their ilk.

I agree, I have no idea what it is about our fellow countrymen, and women that makes it a part of the national phsyche to have the overwhelming urge to control others lives to the point of curtailing freedoms, enjoyment and hobbies

Maybe they don’t like drones just because you can take pictures without paying to get in first.

Now here’s a question for you NT Haters/Lovers?.
A Main road running through a NT Park (Blickling Hall) ?, is it classed as a Public road,
which technically you can take off from being a Public Place, and, more than 150 metres from Buildings?.
Or definitely a No No !.
I should add NO “Private Road” signage.

That’s a tough one having looked on Google maps. More investigation required I thinks.

Hmm … based on what you have provided and no further research I’d say that there should be no issue with that.

That is also, my own take on part of their paranoia.

I’d say that there should be no issue with that.

Driving past the Main House a couple of weeks ago, I thought that !.

Ok. Blickling estate and surrounding land, having looked at the NT land map yes the road runs through and if you don’t zoom in it looks like they own all the land including the carriage way. 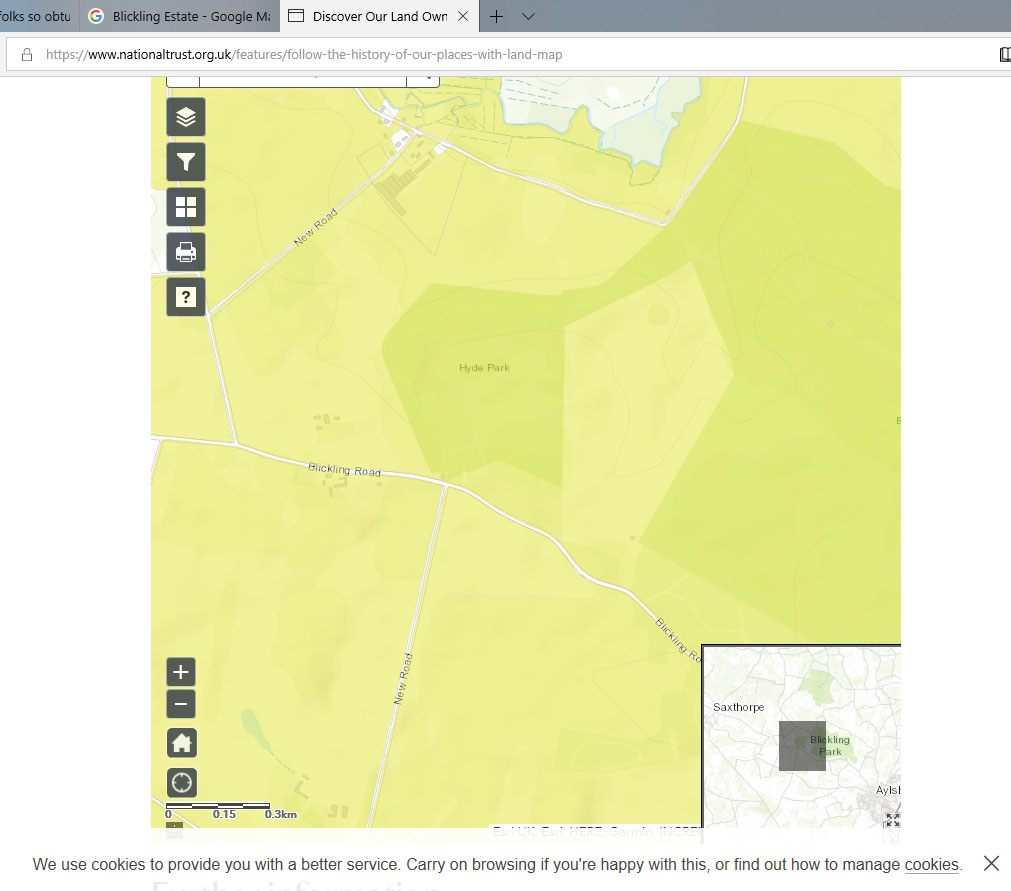 However when you zoom in you can see that their boundries are either side of each road how far that incroaches towards the carriage way is unclear, so whether you can take off from the verge is not clear 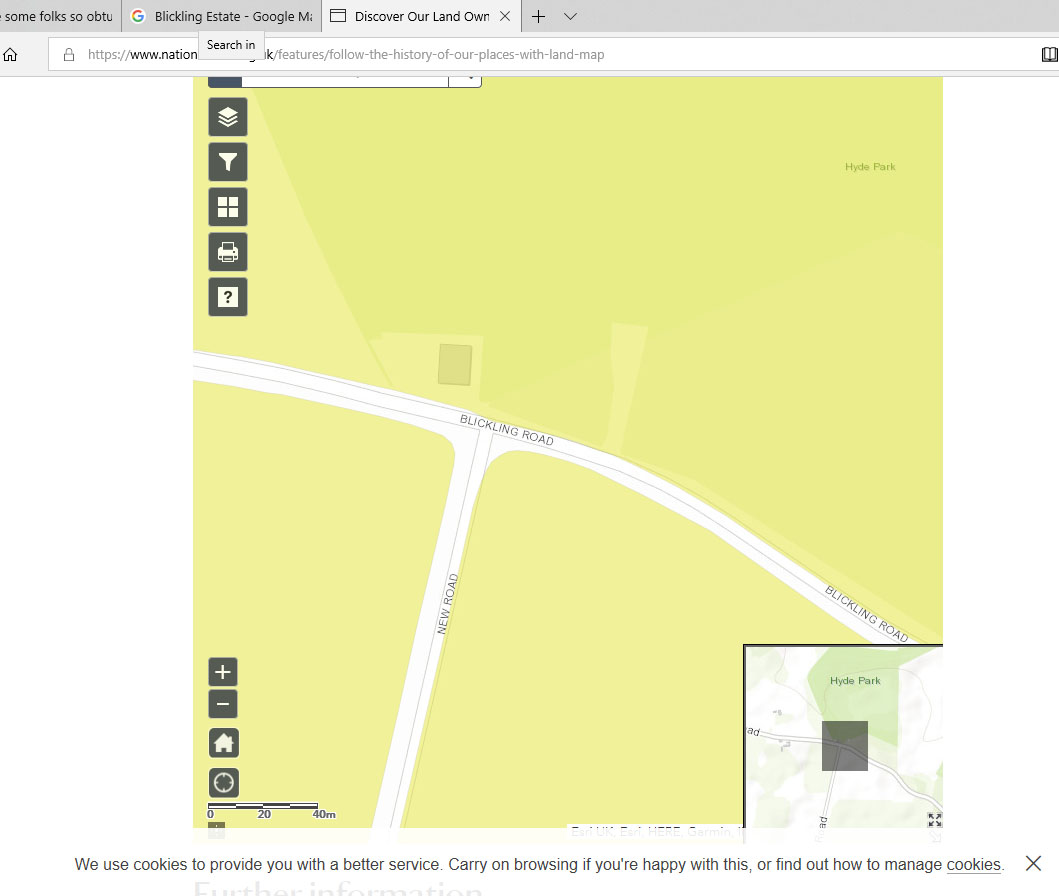 BLICKLIMG21059×896 85.3 KB
But they don’t own St Andrews church or the land in front of that so there is your launch point 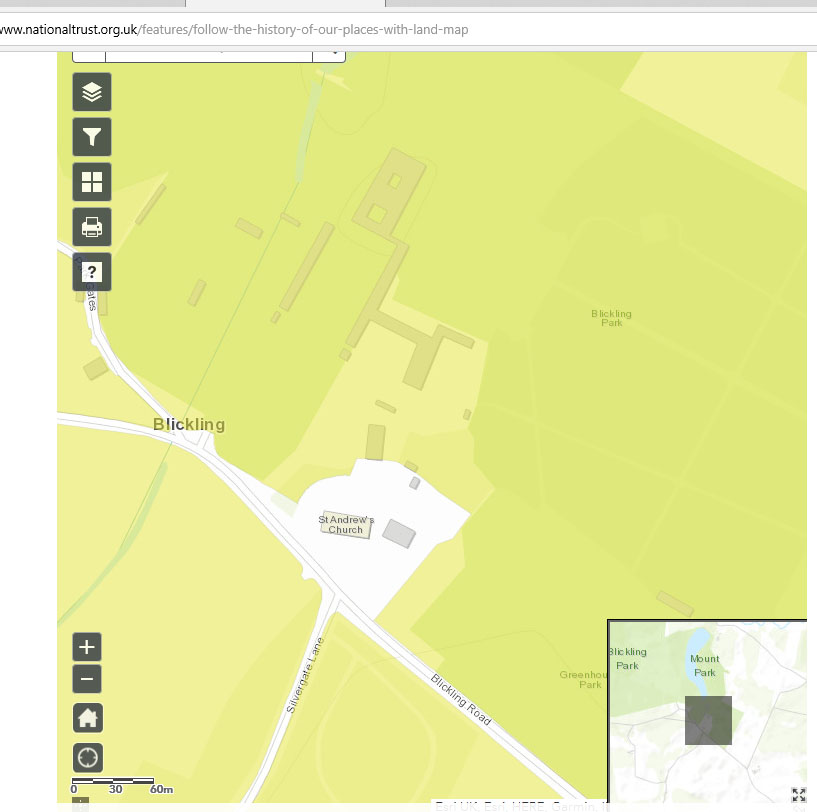 Am I bad person for working to get round their arrogance

In fact, I’d say your launchpad could be the manhole cover near the phone box (just past silvergate lane) - perfect flat area off the road

or the gateway opposite the estate as that isn’t theirs either.

What it needs is few members to take off from just outside the gate (on the road) and poke them in the eye, by going straight up and just hovering.
You would still get a great shot from there.
Can see what you mean by the Church, it’s actually right next to the Main House.