Would you change this prop

The mini2 is flying fine but when checking over this morning before heading out, I noticed a prop with a tiny little nick out of it. I can’t remember hitting anything but must have at some point. I wasn’t going to bother changing it but I’m going to be flying over water this afternoon so thought better safe than sorry. Would you guys have bothered? 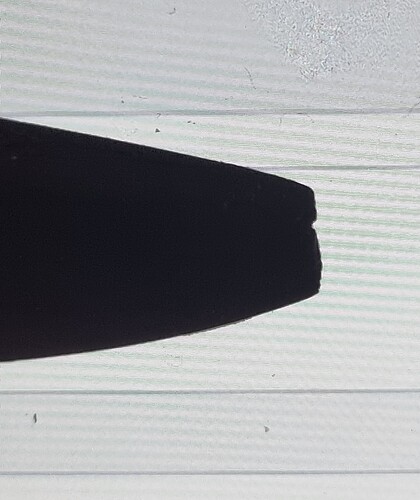 I’m with you on that one … I check them over very carefully before each flight (I am very new to this).
As I see it, its a lot better to ‘waste’ a new prop, than have some sort of failure when out over water!
I’d keep the ‘damaged’ prop as a ‘just in case’ spare.

some sort of failure

I don’t think that amount of damage to the prop tip would cause a “failure”, but a possible consequence would be vibration. That could cause issues with video (jello) and photos (blurring) with exposures of longer than about 1/500 sec. .

More important, since it must have clipped something, will be to double check the pivots at the motor end, and the actual fitting to the motor, for any cracks. That’s where “failure” would be most likely to happen.

mmhhh, I have actually noticed some of my photos are a little “soft” lately. I’ll be honest and say that I don’t really check props very often, seeing as they’re pretty fundamental to flying and more importantly, not crashing, I should check them more often. Can’t see any other damage under magnifying glass so should be good to go.

… if you need yo ask

you know you should swap it

blades are cheaper than possible alternative

or your once in a lifetime shot that’s ruined because of vibration. Change it and get out there and enjoy yourself

A blade on a real heli for instance…if it has a smallest nick is changed as it upsets the flow of air. and an aircraft engine is removed and checked for stress if the prop has hit anything like the ground on a hard landing…
Anyway…whats the cost of prop compared to a total loss?

No question, the only answer is yes

ANY damage, even the slightest nick will cause problems. Remember the props are balanced sets, a nick in one, will throw off that balance. This can not only cause problems with video, but stress on the motor in question, due to the imbalance. It may look trivial to you but you will regret it if you don’t replace it

I had already replaced it

I was just wondering if everyone else would do the same, and it would appear the answer is yes

An imperfection at the tip is going to have an effort on stability. Not saying unsafe to fly, but definitely cause for concern re image quality.

Personally i would change the prop and bin the damaged one. They are relatively cheap compared to the cost of replacing the drone in the event of a crash.

Yes I would change it

Just to expand on what I posted above. Yes - I’d change it. But neither would I panic or worry unduly about it.

But at the same time if I was miles from home without a spare, I’d not abandon my flying plans because of it. It’s not in danger of dropping out of the sky if the checks I mentioned prove there’s no fundamental issue.

When I was in Italy for 3 months there was nowhere to buy spares, a dog had totally chomped a set and, before I got home to organise spares, there were a couple of chips in the remaining props from landing in rough terrain. It flew fine (probably another 20+ hours) with them.