Your thoughts on the Mavic Mini

Love mine, totally!! Only time I’m leaving it at home is when it need charging (only 1 battery).
Since I’m new to this, my videos are C-mode and deaf slow. But I’m just gonna keep practising!!!
(Just put one of this morning into “videos by drone”)

This is great! I saw a YouTube vid a couple of days ago about the Mini manoeuvring through small spaces and I’m hoping to do some myself (once I get some flight confidence).

When you have all that confidence PLEASE send me some of it?

Interesting that the Android version is still v1.0.1

I was going to update the Fly/GO5 thread yesterday, but couldn’t see that version on the Android store

The DJI Fly app was designed to help pilots fly drones with ease (DJI FLY is only available with Mavic Mini for now). What does the DJI Fly app offer? - Intuitive interface and an expansive live view. - Easy-to-follow flight tutorials to help you get started. - A search function to discover scenic flight spots near you. - An advanced editor with tools and templates for quick editing and sharing...

It didn’t say this yesterday when I looked 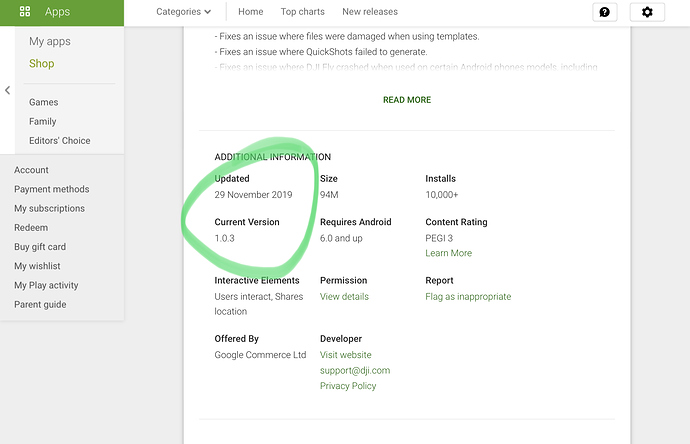 I keep getting more impressed by this thing every time I fly it. Even around this radio tower, the signal never dropped out at 1500ft distance.

Really love it, BUT, does anyone know how to knock off that annoying beeper when you use the RTH button? Testing the range tomorrow and that beeping is doing my head in!! Any ideas?

Yes. Don’t use RTH and fly back manually

Really love it, BUT, does anyone know how to knock off that annoying beeper when you use the RTH button? Testing the range tomorrow and that beeping is doing my head in!! Any ideas?

I’d use my RTH more often if the beeping wasn’t so loud. Is there a setting to turn that off or turn down the volume?

@AndyCortez
Would love to mate, but, I can’t see (even with specs on) either the wee arrow, nor the screen on bright days. Over 2 weeks now I’ve been unable to see how many satellites I’m acquiring for all my flights so far. So, it’s a case of NEEDS MUST!!!

Which sadly doesn’t work on the Mini

Tried on a Mavic Mini today. Couldn’t get it to silence, tried a range of presses from short intermittents to long holds. Eventually the RC powered itself off and disconnected me completely

So alas, this doesn’t work on a Mavic Mini. Or, I did it very, very, wrong…

Surely just powering off the RC would trigger RTH, and with the power off… no beeping… right??
Wish I’d tested that yesterday

IMPORTANT: Safety concern regarding the Mavic Mini on iOS.

Due to an unfortunate incident where a flyer had his Mini crash into a tree canopy from below on loss of signal in woods, we’ve realised that the iOS version of the DJI FLY app does NOT have a RTH behaviour option to LAND or HOVER, unlike the Android version of the FLY app.
On learning this, I have contacted DJI Support tonight raising my concerns about the safety of the Mavic Mini when operated with the iOS app which is lacking this important function.

I can confirm that DJI Support are now passing this information onto the developers to get this added to the iOS version of the app in a forthcoming update.

In the meantime, I would recommend that all Mavic Mini flyers running the DJI FLY app on iOS, only operate their aircraft in open areas.

How did they not notice the options weren’t present? What did they think would happen?

This is all in the manual…

Failsafe RTH automatically activates after the remote controller signal is lost for more than 11 seconds.

Yes, there’s that obviously, but it highlighted the fact that the Android app has the option to hover but the iOS version doesn’t. Gladly, they’re on it now to get it included for iOS.

and sorry @PingSpike for the link you had to edit, just copied it over from a facebook post and the formatting appears to have carried over on my name.