Downloaded the free version. Just having a nosey through. I noticed most flights have a few warnings with them. when clicked on the warnings to see what they were they are all the same in every flight. “mode changed P-GPS”.
please ignore my ignorance but why does the mode change randomly during the flights. Cheers

At what point are the warnings? If they just after take off I would suspect you haven’t allowed enough time for it to lock on to enough satellites, if during flight the signal from satellites was blocked in some way while flying. (Under trees, built up area or behind a building/house). It can lock onto up to 16 satellites or more easily, but if it drops to something like below 8, it can affect accurate GPS navigation until it regains more, such as when coming out from the ‘shadow’ of a building. Hence the warnings, not really something to worry about outdoors unless you are totally enclosed in a building and then you can end up in atti-mode.

Thanks Brian. The majority are shortly after take off but I do wait for GPS before flight and usually check the number of satellites. Airdata is quite an eye opener. Even the free version. I was just trying to view the flight the the MP crashed. It also shows same thing not long after take off.

This was from the flight in question. I t was literally a quick flight to check her out before I headed further out.

There’s not a lot to go on, Imhave no idea about the crash but I’ll take an educated guess then tell me if if I’m way off.
It looks to me like the flight was in strong wind, there could have been gusts higher but about 24/25mph is an average. Was the flight over water? Or from high point? There seems to be a minus value before the end of data which suggests either over water or flying into a valley.

Take off point was actually lower than where it crashed. Had to walk slightly up hill to retrieve the drone. I was near the top of a valley at home point on a large area of flat ground. Id bumbled around me for few mins checking things on drone and getting feel again. Been a while since I’ve been able to go and fly. 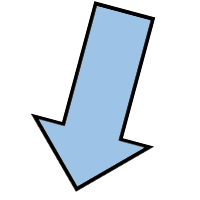 The Kp Index measures geomagnetic disruption caused by solar activity around the world, on a scale from 0 (calm) to 9 (major storm).

The higher the Kp index, the more likely the drone is to have problems. 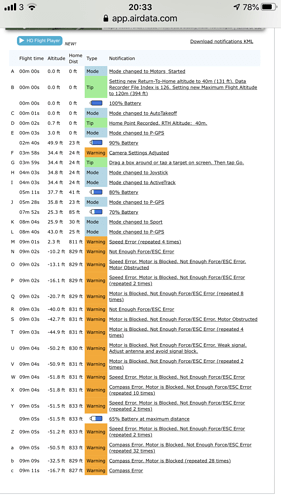 That’s better. The picture starts to become clearer. From the air data it looks like for some reason you placed it into sport mode and set off at a fair old pace (about 24mph at a quick in my head calculation)
It seems that one of the motors has developed a fault, or maybe a bird strike, unlikely but possible. Could be a seized bearing or propellor fault. Could have encountered turbulence or as its called ‘rotor’ (as a, paramotor pilot I stay well away from anything that causes rotor cos its deadly) but again this wouldn’t cause a motor fault just a bit of wobble which the drone should be able to correct easily

Hi thanks for taking a look Brian.
Yeah I piped it in sport mode had a little fly around. As I mentioned earlier been a while since it’s been flown and was just going through the motions of getting a feel for her again and making sure all was doing as it should. I was coming back in to land and paused close to where I was standing. As I moved the drone forward to bring her down became apparent straight away that there was something not right there was a warning on controller which I originally thought was EMI but may have been IMU. it then just shot off straight over my head and hit the hillside further up behind me. Pressing RTH pause etc had no effect so ended watching it disappear and get an idea where it crashed.
I was keen to get out and fly and can’t deny I may have done something wrong. Frustrating that the repairer found no specific reason for the fly away and was hoping to look at this and say I was a pillock and did that wrong.

Was there a low sun or bright light behind you. I had a strobe on mine once, it was dusk and the sensor for some reason sensed the flash of the strobe and off it went like a scolded cat. Luckily I hit emergency stop and it unceremoniously landed safely, just missing a fence but not after it had flown backwards to try and avoid the flash of the strobe. My air data actually showed where it stopped after each flash, then set off backwards, stopped and set off again at each flash before it landed. I since remounted the strobe under the aircraft rather than on the front legs

No sun was behind the drone. I’ve had a couple of instances in the past when flying towards the sun near dusk. The drone detected an obstacle and I’d have to alter direction to get rid of obstacle warning from the sun.
The only other factor is Flyingdales early warning system. I was well outside the warning area and have flown in that area before with no issues. Maybe some environmental thing on that evening meant their signals were stronger and it effected the drone. Pulling at straws I know.
I’m confident the guys at Drone Doctor have done a good repair and testing. They assure me all is good but it’s less of a niggle in the back of my mind if there is a definitive reason for the crash. I’d be lot happier in my mind if I’d mucked up or a glitch caused the crash. At least I’d know it ain’t happening again.

Just clutching at straws. If you exclude the impossible and improbable, then what’s left is the truth. It does look like a motor or prop fault.

Paul looking at that data I’d say you just had the mishap of having a motor die on you mid air.

Unfortunate, expensive but I think it was just as simple as that, luckily you were able to retrieve it, imagine if we were at Naburn and it went for a swim ;o(

I agree with @Brian on the mode changes, I see it a lot on my MP and Mini too, I think its just getting its bearings and reconfirming the mode, if you playback these flights in DJIGO or DJIFLY then these ‘warnings’ don’t flash up on screen, where as the others such as weak signal and esc errors do.

Not a great help really, but you are back in the air, meet up soon (dry land) ;o)

Thanks Brian and Chris for you input chaps and yes your probably right Mechanical failure a possibility.
Chris I’d have been straight in lol. You’d have been watching the bubbles having a sly bet between you as to whether or not I reappear. Lol.
Once again thanks fellas. She’s back tomorrow and I’m looking forward to powering her up again.
Missed having time to fly and chat on here.