Early evening foray looking for somewhere good to launch and photograph our local church. Found a suitable spot near to the lock and was able to observe Little Nellie all the way. I mounted a cree LED strobe on top to help with sighting. This shot is an AEB stack of 3, settings were on auto which worked out just fine to my eye. 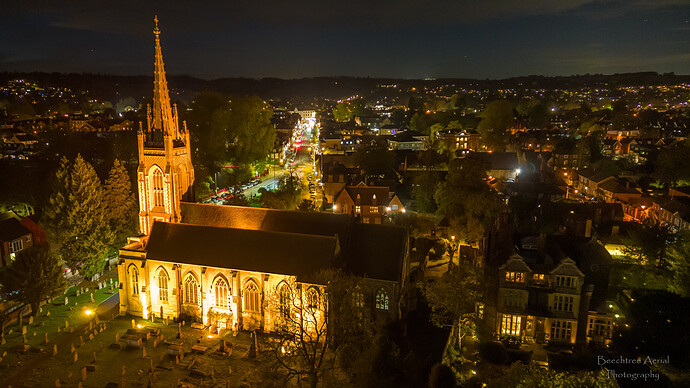 Very nice shot ! Would you mind sharing a link for the led light. Thought of doing this for sighting during the day as well (underside) and interested to see what you went with !! Must of given you a bit of confidence during flying at night I assume too. Thanks

hought of doing this for sighting during the day as well

Search ‘Cree’ its been spoken about loads

Having lived in the area most of my days, I was comfortable with the flight area and intended path (albeit 100% over the water/weir), but seeing the winking green LED certainly brings a level of reassurance that you can track your craft in the darkened sky. The 3M lock tab whilst allowing you to remove the LED when not needed, was actually quite poor in terms of the hook/loop mating, so I swapped mine over to using a thin foam VHB pad. It means the LED is there permanently until I cut through the pad to remove it, but at least I know it is secure.

Weight wise it does take the mini-3 pro slightly over the 250gms though, so it’s something else to consider too.

Hi I got one of the ViFly strobes for Christmas for use with my mini 2, to help me keep my eye on it especially at dusk.Where did you attach your strobe? I assumed on the nose above the camera but did not know if this would effect the gimbal or other electronics.

Hi TristantheDog, I mounted it square in the middle on the top side. It’s more so that other craft in the air can see it than me. Whilst I can spot it winking away when the M3P is airborne, it’s not my first priority for it being there. Tried it underneath but that just meant the drone tipped up when landing, so I soon shifted it topside!

What do you expect them to be able to do even if they could see it / by the time they’ve seen it?

Other craft? Drones or planes?

Chances are another drone operator won’t be able to gauge the distance accurately to know it’s actual location.
And, chances are too, they are looking at their video feed more than at their drone to notice it.
Also, mounted topside, there will be a large area from which it won’t be visible at all to someone on the ground.

A plane pilot shouldn’t be low enough for it to be a concern - and, speaking from experience, when he’s higher and with the backdrop of other lights on the ground, probably won’t notice it. A far brighter, light aircraft, strobe becomes almost impossible to track from above, with the lights of a town below.