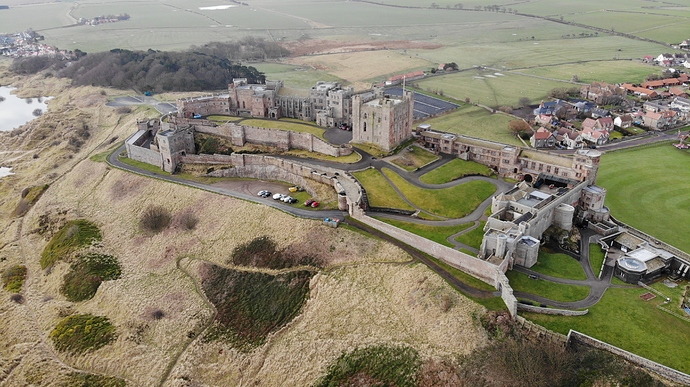 Great shot and quite an impressive and well maintained castle by the looks of it.

Looks well fortified and must have been very impressive back in the day.

Here is some info…and its only a 1hr walk on the beach or a 7 min drive from Seahouses Bamburgh’s written history begins in the times of the Anglo-Saxons with one chronicler citing Bamburgh as probably the most important place in all of England. But even before this there were people living here, there is archaeological evidence that as early as 10,000 BC there were people here. There are Bronze Age (2,400 -700BC) burials nearby and pottery sherds dating to the Iron Age (700 BC – 43AD). With little evidence of their occupation only the name Din Guayrdi gives us a hint that Romans were sometime between 43AD and 410AD. It was during the early medieval period between 411AD and 1066AD that Bamburgh grew in stature and importance. With the arrival of the Saxons, the creation of an important Christian site and the coming and going of the saints Oswald, Aidan and Cuthbert, it was a pivotal time. Following this period we saw the arrival of the Normans and the construction of our Great Tower, the culmination of the Wars of the Roses with the siege of 1464. The arrival of the Foster family, gifted the ruins by James 1 with the subsequent acquisition by Lord Crewe and the formation of the Crewe Trustees. A resurgence in stature as under the guidance of John Sharpe the castle became a leading surgery and dispensary for the poor and sick.
The massive square structure is the oldest surviving part of the castle. Its mighty walls are 11 feet thick to the front and 9 feet wide elsewhere. The Keep sits on a massive plinth, designed to stop attackers digging underneath and setting fires to collapse the walls.

Stones quarried three miles away at North Sunderland were carried to Bamburgh on the backs of horses and men. Built by scaffolding to the first storey, the rest of the Keep was built by masons using “over-hand” work. This means the walls overhang a little at each side as they are wider at the top than the bottom. Built to withstand attack, the Keep’s massive walls are between three and four metres thick. Its bottle-shaped doorway allowed soldiers on horseback to enter at a gallop without dismounting. The well, a reliable source of clean water, was critical in a defensive site. Now enclosed in the Keep it dates back to Anglo Saxon times. Sunk through 48 metres of solid rock, the well is an incredible feat of early engineering. Workers at the time would have had only the simplest tools to help them cut through the resilient whinstone.

In the Laidley Wyrme fable, legend tells that Behoc, the evil step mother turned into a toad, is banished to live in the depths of the Gaitwell. She preys to this day on unsuspecting maidens.