Another installment of big ships!
Also when filming all the ridged container ships I get a ripple effect. Anyone know how to edit that out in future of was it just my angle to the sun? Help appreciated! 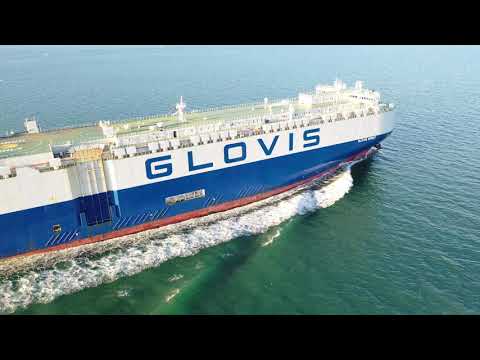 Also when filming all the ridged container ships I get a ripple effect.

The Moiré effect on the sides of the containers?

Not sure that you can remove that. It’s an interference effect between the “frequency” of the ribbed sides of the containers and the pixels in the video and/or screen.
(By frequency … spacing in terms of image pixels.)

What shutter speed/frame rate are you using ?

Try aim for 1/50th shutter speed (filters or aperture adjustment), it won’t stop the moire altogether but can reduce it

Thanks for the info! Never even heard of that!

It’s not unusual to see it on TV programs … usually live stuff and news items … when they don’t have control of everything to remove the items causing it.

Some “busy” striped/chequed shirts can cause it, etc.

As well as a longer shutter speed, if you weren’t already using one, Chris’ suggestion made me think …

Basically a longer shutter speed adds some degree of motion blur … but with the relative speed of the ships to the drone not being a lot different, the problem areas aren’t moving across the image all that fast … but it still might lessen the problem, as he suggests.

So - this had me thinking - and depends on both what you’re using to edit and your skills in using it … beyond the obviously very competent seen in the video.

You could try a combination of tracking, masks and blur.

Tracking to keep the mask in position on the corrugated containers, and then a slight blur that would only be applied in those areas.

Getting into the realms of pretty fiddly - and in Davinci Resolve I know exactly how I’d try doing it. But even if you also used the same software, (a) I’m pretty sure I couldn’t talk someone through it and, (b) even if I could it would take aaaages!

No worries, you’ve been a big help just telling me what it was called! I do use da vinci and will have a fiddle with the settings next time.

Even without tracking and masks, you could easily apply a very sight blur to the whole thing, and render that section, to see if it helps … saving a load of time compared to tracking and masks.
If it doesn’t help, then the fiddly route won’t do any better anyway.

Even without tracking and masks

Coronavirus really has messed with my context filter…

A quick fix can be to add a bit of Gaussian blur to an adjustment layer (try a couple of pixels first) then add a standard sharpen filter to the same layer.

I had a similar instance flying over tiled rooftops in a french village in very bright conditions, this helped.

Hi Richard
great video and well edited, the ripple effect from the containers will be the sun bouncing off the correlation of the containers nothing wrong with the camera. Great work love to see the big ships unfortunately for me on the Mersey we don’t see many these days. Keep up the good work.

Great video sir… I’ve tried to get within filming distance of ships but get warning messages of strong magnetic fields and weak signal even though I can still see the drone…so I have to retreat…do you get any warning messages???..

Thank you! Strangley enough I don’t think I have ever seen an error message when in close proximity to any ship I have filmed. I would have expected to at some point. Do you think they can see me on radar?

Strangley enough I don’t think I have ever seen an error message when in close proximity to any ship I have filmed.

Me neither … in the same area as you, further up Southampton Water, at the container terminals between Redbridge and Millbrook near Southampton, or from Calshot Spit. All with my MP.