A couple of days ago, I headed down to Bratton Camp. I’d been there recently, but unfortunately it was when the UK was covered in a blanket of fog. It was better the 2nd time, but VERY windy, 27 mph (46 gusts). I’m fascinated in history, so been wanting to visit here for a while.

Today I visit Bratton Camp, which dates back 5,000 years, and importantly, where King Alfred the Great defeated Guthred, the Viking warlord and the biggest army Britain had ever seen.

The original Iron Age hillfort defences were built at Bratton Camp over 2000 years ago. These earthworks protected a settlement containing round houses, granaries, stores and workshops. The design and construction showed the effectiveness of the hillfort to its enemies.

The site was excavated in the 18th century. However, three thousand years earlier a Neolithic long barrow existed on this hill, and later excavations in the 19th century uncovered human skeletons and cremations.

The White Horse is visible from afar and is a famous local landscape. Local records suggest that the horse was originally cut in the late 1600s, to commemorate the Battle of Ethandun (now Edington), which took place at Bratton Camp in AD 878.

I am still finding my feet (no pun intended) with the Pocket 2 and M2P. And filming my mush and talking in videos is still new to me. Not sure if it adds anything for the viewer, but for me, it stops having to add subtitles and info text 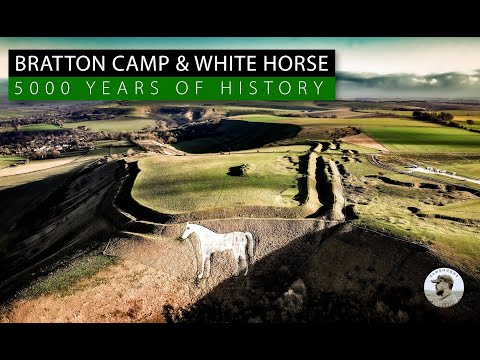 I had no idea that these forts were so big.
They are certainly somewhere we shall be putting on the “to do” list.
Thanks for that.

Thanks Clive, I appreciate that. This hillforts are amazing. Never knew about them until recently. The more I delve, the more I find. And they are steeped in history too. Most of them are Iron Age, but quite often, something was there before - as is the case with this one, a Neolithic long barrow that dates back to the same time as when the Pyramids were being built!

quality video and lots of great information , that winds was sure blowing,

Thanks Steven! Glad you liked it