Off on my holibobs, spotted a nice Brocken Spectre as we started our descent. Not the best of footage, but it was something to see.

@JoeC
Hi Joe, there is no video, can you upload again, thanks.

Playing ok for me.

Just a weird soundtrack for me. No video…

Weird, the video plays ok on my Apple stuff but not on my Windows stuff (like @Alphi1847 I just get audio, not video).

Missing codec on my PC maybe?

No video for me either, s9+

Hmm… took it on the iPhone, trimmed it there then iCloud photo-sync to iPad and posted it from there. Guess it got some Cupertino juice on it somewhere along the way.

Don’t let the CAA see that, quite obviously a drone

(Played ok on iOS and OSX)

Just audio for me as well.

Audio only for me if viewed embedded but I can download it on my phone and it then plays fine (using MX Player app). So others may want to try downloading and playing locally. 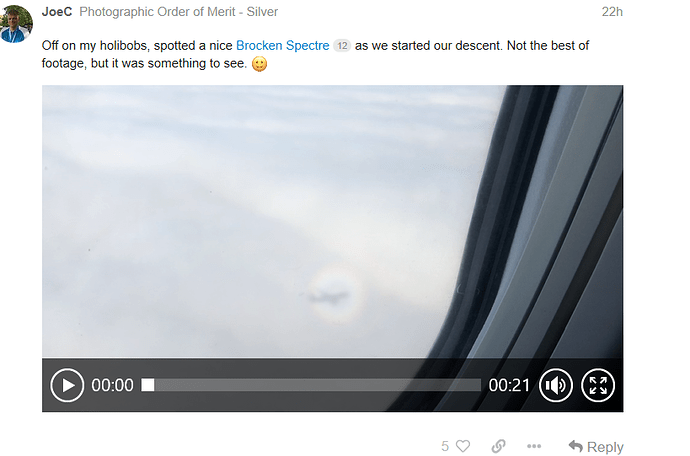 So others may want to try downloading and playing locally.

Trust me, it’s really not worth the effort

Joe can hear some sound but no video

Honestly, nobody is missing out here… it’s just a short clip of a slightly blurry shadow of a plane on a cloud, surrounded by a rainbow. It’s a cool effect to see, but I barely had time to focus and was leaning across two seats so it’s really not my best work