I was hoping to sell my mini to a friend, but by time I’ve gone to his he has ordered a mini 3!

Anyways I flew my 2 and my fpv and 5 inch. Wow he has a lovely garden. We setup and flew his 3… great, what a lovely drone, it felt so light! Unfortunately on his attempt at hand landing he caught his finger (tried to grip it) and it dropped the meter to ground. The gimbal now moved a bit but isn’t right and not working. He does have care refresh so is this the best thing to do. I feel gutted for him, is there anything else to try?

Btw his finger is ok. And boy I wish lived where he does… It reminded me of bardwells… He said could go and fly anytime! 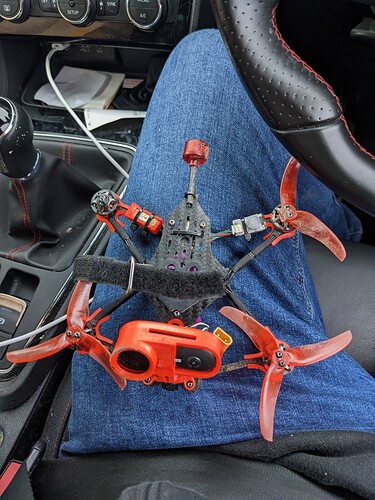 And so as to not make him feel too bad, I crashed my babyhawk into one of his trees shortly after and broke a couple of props

If he tries a warranty claim, he’ll have to return the drone (probably Netherlands) they’ll check the flight data and rule out warranty due operator error - which will probably take some time. Then they will normally quote for repair or give him the option use Care Refresh.
Others that have used Care Refresh have been amazed how quick and painless the process is.

Cheers for quick response. yeah operator error, assume DJI don’t officially recommend hand landings… So so fragile though those gimbals, it tried to move, we tried auto calibrate on it, but yeah fear was right… Just seems dead

His flying (for never flying a drone before), was great! He got some good photos. I tried collision detection , and worked well. Impressed, though not with the strength of the gimbal, and the winds were high, both the 2 and the 3 handled it with ease

A lot of Mini 3 “incidents” seem to get away with no damage or just a nicked blade but it also seems its the gimbal that suffers most when the damage is more serious - only to be expected I suppose on a sub 250 gram drone.
Having said that, a tree attacked my Mini 1 which ended up with a fall of about 8 metres onto grass - 1 nicked blade and the battery door was buggered - but it still flew OK.

Just send it back to DJI for a repair quote, very reasonable quotes from them, did my Mavic 3 for £79 return, on a major damaged gimble.