Brunswick Wharf, Manchester - Added to Everything Else in North West 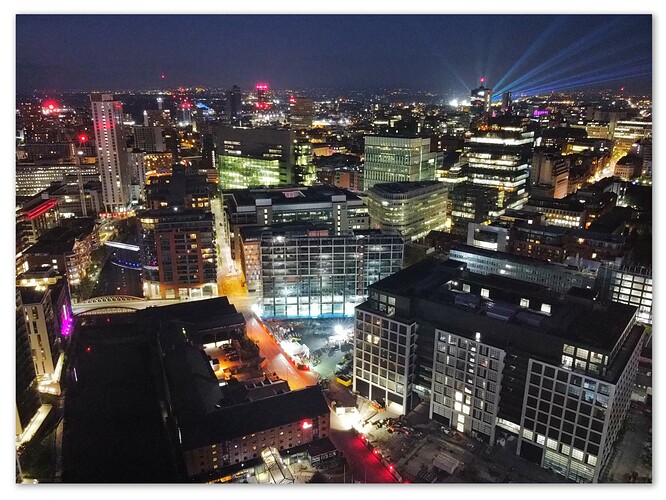 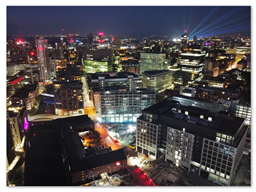 This location has been recommended to fly your drone in the Everything Else category in the North West region.

This is an urban location with good views of the River Irwell in central Manchester, and across the Manchester cityscape.

My take-off-and-land location was at the mouth of the long-disused Brunswick Wharf / Brunswick Basin (a canal which branched off the river and ran underground). After dark, it was quiet and I saw nobody else while I was there. It is accessible from Water Street M3 4JQ. Walk south past the Marriott Victoria and Albert Hotel, and once past the hotel forecourt follow short footpaths west alongside the disused basin. This leads to a riverside path with some suitable spots to take-off right next to the bascule bridge.

Accessibility: There is no parking on street, but other parking is available nearby and then it's a five-minute walk. The TOAL point was accessible via steps.

Hazards: It's a city-centre environment so there are pedestrians, cars, trains etc, and sometimes boats on the river during the daytime. You may be challenged by security from the hotel or nearby sites, so if concerned about that you may want to notify the police about your flight in advance. Brunswick Basin itself is not well-lit after dark, and there could be anti-social use. During the daytime I would not expect this.

The originator declared that this location was not inside a Flight Restriction Zone at the time of being flown on 27/05/2021. It remains the responsibility of any pilot to check for any changes before flying at the same location.

Details of the underground canal here:

The underground canal was built in 1839 to avoid large tolls on the other connection between the Rochdale Canal & the River Irwell, and also provided a convenient route on to the Manchester Bolton & Bury Canal which terminated almost directly...

Thread with more photos from this site: