Can someone please tell me to persevere with Final Cut please?

Im not used to the MAC system but after a month of owning a MacBook Pro it seems that if there’s a really convoluted way to do something they Apple will do it. Squared.
Final Cut. I just dont understand the libraries. I start one and there is only a 50% chance of seeing it ever again!
After I made my first film I made a thingy of it on my hard drive aImage? and a blurry disc and a YouTube version. there is no final version on my HD to go back in and change things. its just gone and ive not deleted it.
Why can’t Apple have cut and paste on the right button rather than go to edit…aaarfrggg.

am I missing something or is FC really so tricky to understand.
Thanks

Traditionally apple mice only had one button, so command + click was the normal (can all be altered in settings anyway), I’ve never used a mouse to cut copy paste, favouring the keyboard)

As for libraries, there are loads of tutorials on YouTube

I set one up for each project/job 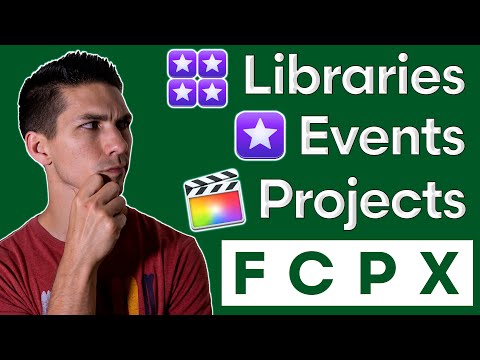 Libraries were probably the hardest thing to get my head around after moving from Premiere Pro, but once you get it, it all clicks.

As for the library files they should be stored in your Movies favourite within Finder.

You’ll probably want to learn how to reduce the file size of them as well as deciding if the original media should be imported into the library. With all the render files and stuff library files can balloon, so you need to know when to delete generated event files.

Always shortcuts for apple. Normally hold 7 keys down stand on head and spin round three times. There a reason never have and never will get a Mac.

Actually real reason was having to sort shit in the bios once to get a “normal” 3 button mouse to work. Can’t get on with gestures on most laptop track pads Inc. Windows

Thanks. ive watched many tutorials on YouTube. the first said to only have one library and put everything in it. I did that and lost some footage and some work.the next said to have one library for every new project. I tried that and the next time I go in that library has vanished or renamed gobbledegook.,
I will persevere but I wonder if the software writers actually ever use their own programmes.
I am waiting for the click moment.

Mouse is for the typing pool girls

I would have a new library for every project that’s going to use the specific media you’re working with, that is what works for me. (the terminology can get confusing, I’m trying to stick with the FCPX terminology here in that Projects exist in libraries, but as we are humans we may think of a project as one single video we are working on, hope I’m not confusing the matter)

Then when I’ve finished working on theProject(s) that used those library files I delete the generated event files from that library and then file it away in my archives.

Sometimes a library will serve more than one project (I may create a longer video for Youtube, a shorter one for Instagram then a 1 minute short for Tiktok)

I think the most important thing is deciding what you do with your original media. Keep it outside the library or copy it in. Coming from Premiere Pro the instinct is to leave it in place. I actually prefer to copy it into the library so I know all the unedited media I use is stored in the library once I archive it away along with all actual project timelines.

It’s actually a much better filing system for me! But it’s down to personal preference.

The only downside is if I decide to ever go back to Windows or if a Premiere Pro person wants to edit my work, but I’m sure there’s tools for that and I’ll deal with it when I have too.

I feel your pain. I too am still trying to get my head around it. Personally I leave the files in place and start a new library for each new film I’m making. Trouble is that it gets very messy. It’s a real shame as I find the other aspects of the software really good.

I tried going back to iMovie briefly but that insists on copying video files to its own library creating massive duplication and wasting disk space.

So in short, if you do find an optimal solution please share!

I set one up for each project/job

On a separate SSD I’m my workflow.

At the end of the project/job bin the cache and temp files.

Yes, do persevere with FC Pro. I have used it for many years now but not all the time so always takes me time to re-remember how do do stuff. I think it is like much editing software, it takes time to learn but better to stick with it, learn and keep using. It is a comprehensive editing programme. And as has been said I think there is much help on YouTube.

but as we are humans we may think of a project as one single video we are working on, hope I’m not confusing the matter)

Exactly, I think that’s what causes a lot of confusion; in my mind the library should be all of my footage, a project each separate movie and an event a sub part of each project but the FCPX terminology a library is a movie, a project a timeline and an event a separate item such as a subset of the project.

Having said that plenty of professional film makers seem to be quite happy with it all which makes me think that I haven’t fully grasped the idea yet.

Thanks. Confusion will be my epitaph.

I’ve come to the conclusion it’s just easier to leave the files alone.The quality straight off the drones really good. I shall back them up in months on discs.