Can you take aerial photos of a school & sell them online

I work for a group of schools. Randomly, my boss knows I’m into drones and asked me a question.

A school got an alert and noticed that someone is selling drone images of the school online. Are they allowed to do this?

I wasn’t sure what to say but thought that someone here would know. As far as I know they didn’t have permission and its also not really clear if they were taken over the school’s land.

Any help would be greatly appreciated.

As far as i am aware as long as it can be taken from public land and doesnt infringe any privacy issues its ok. Im sure someone will put me right though

As far as I know they didn’t have permission and its also not really clear if they were taken over the school’s land.

Well (a) why would they need permission, and (b) even if it was taken over the schools land, it matters not they don’t own the sky.

Its like the dudes who used to come knocking on your door trying to sell the aerial photos of your house.

A question with a question

, I thought as much but I don’t know for sure so I asked. Thought it was worth asking as it’s a school. Cheers anyway.

I think if there was lots of children in the photo then there maybe some comeback.

But otherwise I’d say that’s not breaking any laws, the photo sales sites are usually pretty up on what they can and can’t sell

I took some of my daughters school, from private land, when the school was closed, thus no children, no harm done to anyone then, but if taking while the kids are there you might encounter issues, more so parents can and will kick off if their little ones are being filmed, as I would too!

Is there anyone in the photograph who can be identified directly or indirectly?

If taken from within the grounds then signed permission is required

If TOAL was within the grounds maybe.

Doesn’t really need to be as formal as “signed” as such either. An exchange of emails that’s clearly from someone with authority to grant permission to use the land for a given purpose would usually suffice for example. So would a verbal agreement, but that’s harder to prove.

Definitely photo property permission declaration is required if shots taken within the property. Alamy and other agencies will not accept the photo without signed declaration.

If it’s identifiable property. An aerial shot of a building like this isn’t generally very identifiable at all - though the photographer might have shot themselves in the foot by… identifying the property themselves with the title/description.

From airspace, if TOAL was from outside the property, those rights are a lot more limited as you’re not using the land, you’re using airspace.

From airspace, if TOAL was from outside the property, those rights are a lot more limited as you’re not using the land, you’re using airspace.

Yes, your free to take a photo from a public space.

Yeah, but my point is if you take off the drone from outside the property and overfly the land to take photos, and the property is not in itself identifiable property, there’s very little legal standing in the way of using it, commercially or otherwise, on the part of the landowner.

That’s something a court of law might adjudicate on.

That’s something a court of law might adjudicate on

Any case study for us to ponder?

Straight from Google earth (Not that different is it!) 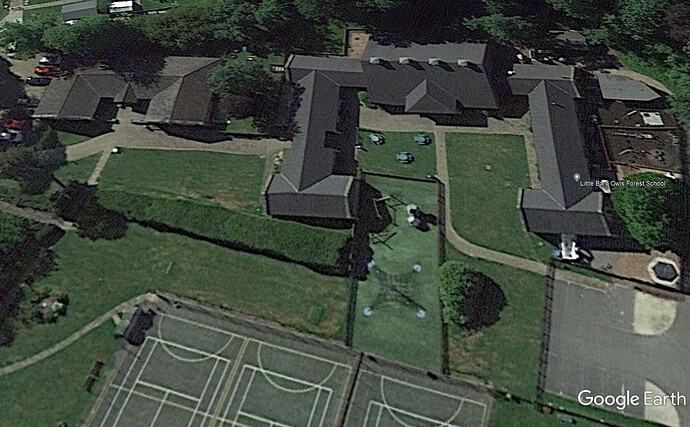 image1672×1035 347 KB
From the Institute of Photography
‘Although you are perfectly within your rights to take photographs from a public place, it can be difficult to distinguish exactly where private property begins and ends.’ (Bold is mine) having said that,
‘The grey area is when you are taking pictures of people on private land from public land. For example, if you take photos of someone in their own home or garden from a public footpath, you are not trespassing on their land, but they may attempt to sue you for breaching their privacy’ a direct quote from https://www.pauldavidsmith.co.uk/

There are a lot of ‘we suggest tha’t, ‘it is advisable to’’… all over the place.
It is a very woolly subject at the best of times, throwing commerce into the mix and using a drone only further complicates things.