Day out Tuesday with @mickydd 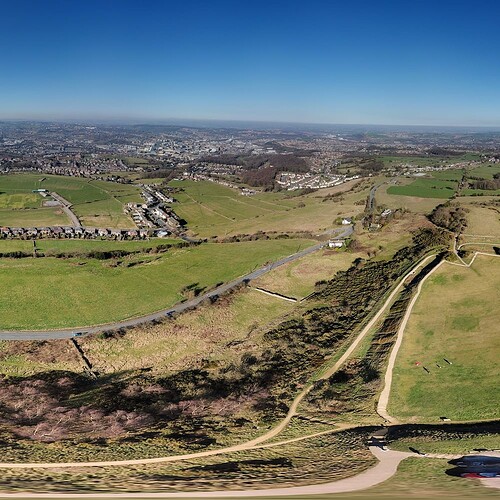 Hangar 360 photos from around the world.

How was it over the hill?, hope @mickydd looked after you dad, great pano ;o)

Great panno and looks like a great place to fly

Well I suppose it was good that he was using the drone code and not just something that had made up!

ok being as Mick isn’t playing
We visited Castle hill on Tuesday all was going well I had done my first battery and mick was in the air.
The Caretaker /warden had heard us buzzing about and brought the drone code to tell us to be carful so Mick said he has his permission to fly pointing at me… for some reason I couldn’t find the printout I had so luckily I had it on my phone so the caretaker was happy we where following the code which Mick continued to talk to him (for ages) while I got my second battery on and was up again
we did get a lot of interest from the passers by and found it quite interesting
so my advice if you do go to Castle hill make sure you follow the code well away from the general public or have Mick frighten them off…

Sounds like the warden was acting sensibly - we need a lot more like him around the country. Probably a wannabe drone flyer!

Hope you suggested that he join GADC,

I did mention the club but no takers

It was a refreshing change to be approached by an employee from the Local Authority and told “You are welcome to fly here, all we ask is that you follow the Drone Code” Good on you Kirklees Council.
Unlike many local authorities who just have a blanket No drone policy and also believe that they own the airspace above.
In total contrast, I’ve spent the last couple of days contacting Bradford Council, trying to obtain details of their drone policy. No one ever answers and so far I have left multiple voice messages but have received no response.