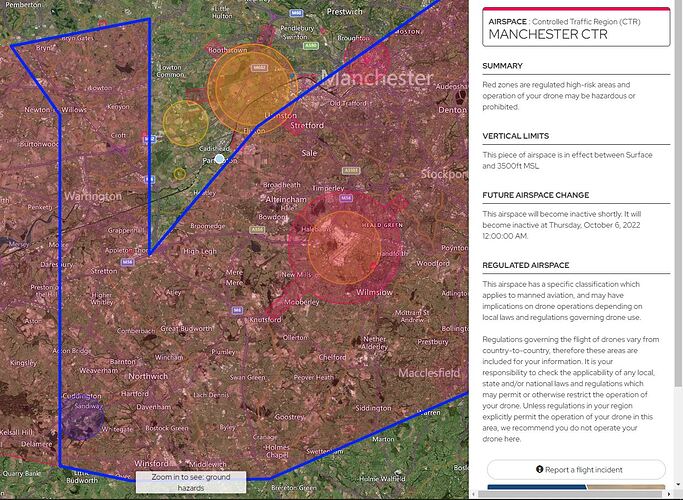 Have I missed something?

Class D airspace has never applied to our hobbyist <120m drone flights (which is why it’s off by default on Drone Scene), so you’ve probably not missed a thing

Yeah, I get that it doesnt apply to our specifics, just seemed strange for such big changes to be planned. I did a PPL with an RAF Scholarship in my late teens from Blackpool, and the CTR / low level route btween Manchester and Liverpool was soo rigidly applied it was scary…

Hi Suzanne. Who did you train with? Was it Keith at Blackpool Flying Club? I only ask because I flew ouf of Squires Gate on a number of occasions on photo missions (with Ben, the Flying Shepherd).

It was in the mid 80’s with ANT - Air Navigation and Training, got to play in Cherokee’s for 40 hrs, was fun, especially the solo x-country to Liverpool and Caernarvon

That’s the fellas. ANT. (My memory of the 80s is fading!) We would hire a 152 and a pilot when we were taking pictures in the North-West. Ben used to let me fly the aircraft to the target area then take over while I took the pictures. First time out I had to explain to him that we needed to be at 500 feet(ish) as the altitude he was at meant I couldn’t get all the property in the picture!

Lol, then you probably flew in the same aircraft as me, B-BASL, BBEF and BBPU… Tbh my memory of the 80’s, 90’s and ever since is fading