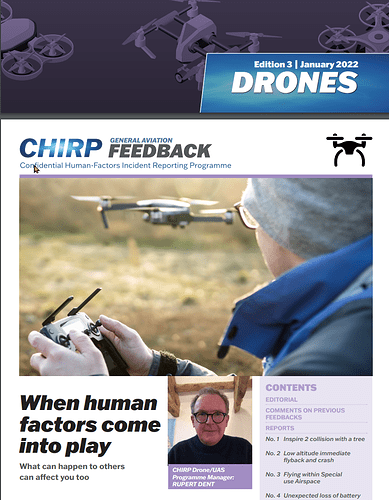 I had a good read, some of the reports I thought would not need reporting.

Not sure if this has been mentioned before, but there is a UK CHIRP (Confidential Human-Factors Incident Reporting Programme) that specifically covers drone flying. CHIRP has been running in the UK mainline aviation industry for many years now, covering initially commercial aircrew and ATC, then expanding to general aviation and most recently to drone activities. Size doesn’t matter

they’ve covered incidents ranging from the loss of a $6 million Reaper a minute after takeoff to the freezing of just one rather vital telemetry stream in a DJI Spark (battery level and endurance) that led to a crash. They welcome confidential reports from all drone pilots, commercial and hobby, and publish a selection in each edition of the drone CHIRP. The latest edition is just out and can be found here: https://www.chirp.co.uk/upload/docs/Drones/CHIRP%20DR_Jan22.pdf

Latest edition just out. As a professional pilot, I’ve been reading CHIRP for years. As a new drone pilot, these newsletters are equally as useful:

So how do get these newsletters? Do you sign up for it somewhere?

The Confidential Reporting Programme for Aviation and Maritime

The Confidential Reporting Programme for Aviation and Maritime 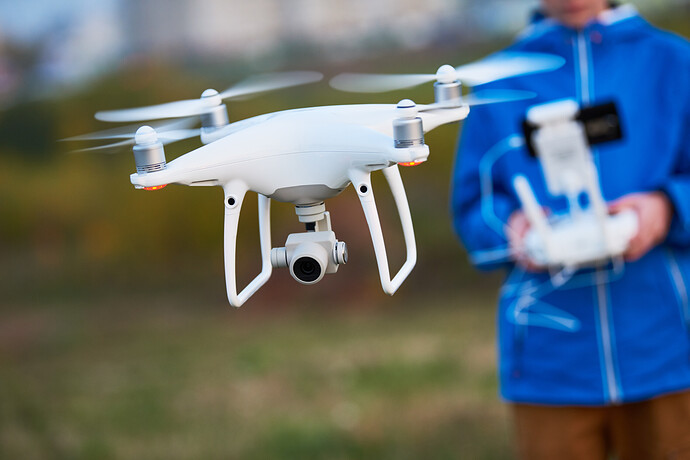 Drones are about people, too... - CHIRP

Includes map confusion, child grabbing a drone and crash on a railway line …

Interesting that the three reported crashes are winged aircraft.

One report is a complete non-event. “I got to the site, realised it was in an FRZ, so I didn’t fly.”

And the child grabbed a “DJI Mini Air2S”?
At the beginning of the report it is named as a DJI Air2S, so fair enough, the 50m from uninvolved people applies. But then there’s that sentence at the end: It is easy to think one as small as the DJI Mini Air2S is too small to harm anyone, but it isn’t.

So was it a Mini 2, or an Air2S? If it was a Mini then closer than 50m is technically allowed isn’t it? And I imagine grabbing an Air2S could potentially do some serious damage.

Whatever the craft, bottom line is, why would you fly close enough to an uninvolved child (or rock star) for them to grab it (or swing their microphone at it)?