Hi there, I just want see if there is a general consensus on the controller mode setting? I have a Mavic Pro 2 Zoom and my preference is mode 3. I was having a discussion with a fellow drone pilot yesterday, who said that mode 2 is a standard for most pilots and we should all be flying in this mode should someone have to take control in an emergency situation. This was the first I had heard of it. I have passed my PfCO and it was never mentioned during my training or assessment. So just wondering if this is a thing?

He is correct, sort of. Most pilots seem to use mode 2. But that’s about it.
However use whichever you are comfortable with and accustomed to.
As for another pilot being at the controls in event of emergency, I think it’s stretching an over active imagination a bit…
If this was the case then we’d always have a co-pilot with us to take the controls.
What kind of emergency would constitute someone getting or being given the controls from you, a competent pilot?
Maybe a medical emergency, but that would be doubtful.
At the end of the day YOU are the pilot and responsible for the flight, I wouldn’t expect anyone to be grabbing my controls unless I became incapacitated, the failsafe position would be the mavic would hover and return home once the battery started to run low if I did collapse in some way, and I would expect anyone nearby to be attending to me rather than flying my drone. I have let others fly my drone, and they are familiar with mode 2 set up, so handing it over to someone with mode 3 might be a concern. My wife’s car has controls on the opposite side to mine and I’m constantly putting the bloody wipers on instead of indicating. So you can see how uneasy I would be with someone used to a different mode.

Just remember to remind people of you’re at a meet what control method you’ve set, especially if passing the controls round (which does happen a lot)

The mode of a n RC controller used to be more of a regional thing.

At one time most UK flyers, and other areas such as Australia and New Zealand, were nearly exclusively mode 1. Nearly all the members in my flying club who’ve been flying for 20 yrs or more fly mode 1.

Interestingly when you compare the stick function on a Mode 2 drone controller they have more in common with a mode 1 fixed wing controller. E.g. The left stick when moved up and down will make the quad go up and down, and on a fixed wing this is the pitch control which again makes the model go up and down. The same is the case of the right hand stick, pushing it forward makes the drone move forward faster and on a fixed wing this is the throttle control which increases or decreases the speed of the model.

When I used to train new comers to our hobby, Fixed wing and helicopters,this was the first thing we talked about… 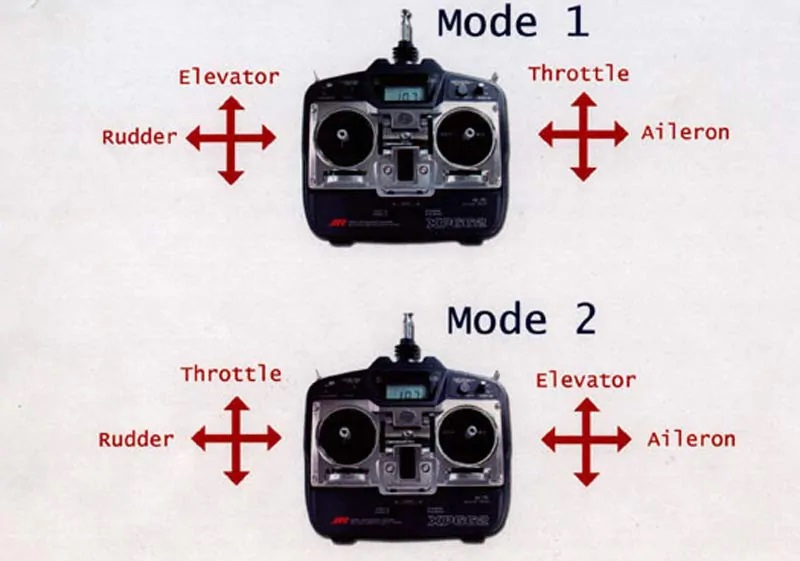 Thanks for all the feedback. I think that it’s good to have universal controls in a perfect world but I think I need to use what I’m most comfortable with.

Hi, I’m fairly new here but I’m curious about something…

Does everyone always use the Mode 2 which is apparently the recognised mode for all DJI Drone users?

I ask because if you search YouTube for the topic no one seems to cover it and most usually say “Everybody uses Mode 2 so use that one”
I’m Left Handed and find that using Mode 3 is more comfortable for me, I feel better using the Left stick for forward/backward/ move right/move left and the Right stick to descend/ascend/turn left/turn right.
Am I alone?

There’s no rule. In my flying club we have pilots whom fly Mode1-4, and one guy who can fly in any mode, but he’s young and foolish, but also a sponsored team pilot for one of the main manufacturers.

Im left handed and don’t find mode 2 an issue, because that’s how I’ve always flown. It’s not a matter of handedness, more of what you’ve personally become used to, after all, you can drive a car (I presume) using the exact same controls as a right handed person. On a brighter note…We are in very good company, most of the greats were left handed…Adolf Hitler, Ghengis Khan, Attila the Hun, Captain Smith of the Titanic.

When I first started with my DJI Mini I tried all the modes to see which I was most comfortable with and ended up on 3. I guess it’s because it most closely matches game controller configuration on FPV games. If I could just flip the throttle it would be perfect.

Anyone who’s likely to want a go an my drone will probably have no pervious experience, so that’s unlikely to be an issue.

The only pain I’ve had was having to convert the controller of my FPV drone over to mode 3 so I didn’t have to deal with two different configurations. I did try for a while but eventually gave in. Trying to learn FPV was hard enough without adding reversed controls into the mix.

This is the same with me, also left handed and I fly using mode 3. My GVC examiner was surprised to find out I flew in mode 3 and said it was pretty rare. Always glad to be different!