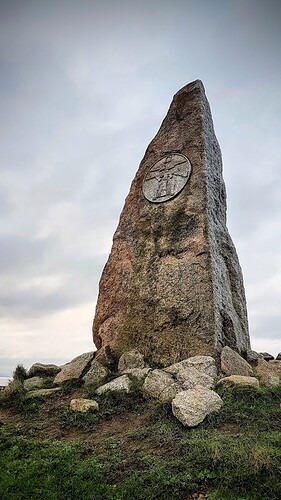 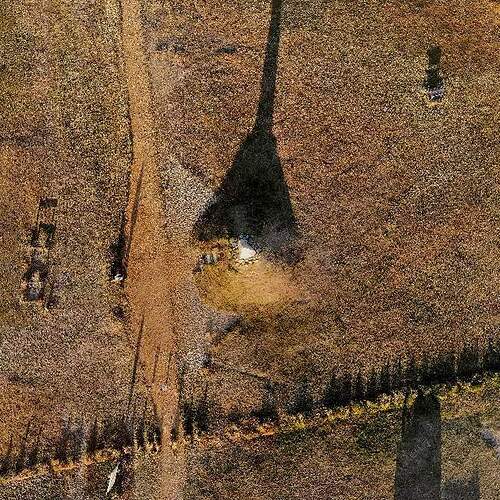 The memorial is a lump of granite (like one of Obelixe's menhirs) on a mound. It commemorates the Combined Operations Pilotage Parties who were based on Hayling during WW2. The unit was formed to develop the use of canoes in warfare, the most famous example of which were the exploits of the "Cockleshell Heroes".

The COPP Heroes Memorial Fund was established in 2010 to raise awareness of the COPP (Combined Operations Pilotage Parties) contribution to the allied war effort in WW2, and to raise funds to create and maintain a fitting memorial to these wartime...

The monument is in one of the seafront car parks with toilets and an ice cream kiosk nearby. The less good news is that the local council considers £6 to park as good for their budget. Also, in summer and with the sun out the beach area becomes very overcrowded. Best visited outside the hours 09:00 to 18:00

/there is a wee narrow gauge railway that "runs" along parallel to the shore - tripod mode is best for matching speed of drone and train. The front offers views over to the Isle of Wight, toward Bognor and along the Solent toward Southampton.

There are 2 pubs, a good chippy and a couple of restaurants within walking istance

This is within the infamous, imaginary and spurious "No Fly Zone" promoted by a website that we do not name. If anyone suggests you should not be flying respond brisjly and with forceful language.

The land is administered by Havant Borough Council. At time of writing (24/06/21) there are no by-laws in force to prevent flying.

Be aware that both Military and Coastguard helicopters often overfly this area at low altitude, model aircraft and other drones may be present and paramotor pilots may fly at 30 feet or less "practising landing"

The originator declared that this location was not inside a Flight Restriction Zone at the time of being flown on 16/06/2020. It remains the responsibility of any pilot to check for any changes before flying at the same location.